Another year has ended, and with it, another pile of games beaten. My Backloggery breakdown for the previous year once again wound up in the negative, but what else is new? I can’t speak for whether this has been a great year for gaming, as the vast majority of what I played were pre-2018 releases, though I did enjoy myself.

If you’ve read one of my past year in review posts, you know the drill: every game here is one that I’ve beaten or completed in 2018, regardless of release date. This time, in addition to my top ten and five honorable mentions, I’d like to give special shoutouts to two games.

The first of these is Pokemon GO, which came in third in 2016. This past year’s updates included the long-awaited Pokemon trading and player-vs-player battling, both made possible by a new friends list feature. Also, the Mythicals Mew and Celebi were added and some Legendaries became easier to obtain via the Research system, Alolan variants and many 3rd and 4th generation Pokemon made their debuts, and, best of all, a new feature was introduced that keeps tracks of your walking distance whenever the game is closed. Oh, and Niantic pulled off a very special (and divisive) April Fools’ update where the 3D sprites used in the Pokemon and Pokedex menus were temporarily replaced with pixel art from the core series, and first introduced Meltan, a completely new Mythical whose initial appearance (with some help from Ditto) after Chikorita’s Community Day event broke everyone’s brains. To say that Pokemon GO had an eventful 2018 would be an understatement.

The second game is Super Smash Bros. Ultimate, a ridiculously massive fanservice fest that I’m currently playing. Every playable character and map from previous series entries are present, and there’s a handful of newcomers as well. However, most of the former are locked away at the beginning, with the only exceptions being the eight that the series started out with. The single-player campaign, World of Light, pares this down even further: Kirby is the only playable character at first. However, since Kirby has long been my Smash main, this was absolutely not a problem for me. World of Light itself is gigantic and lengthy, with RPG-style elements that have made it a great way for me to play. I usually do not enjoy fighting game campaigns, and although World of Light doesn’t have as much variety as Super Smash Bros. Brawl‘s Subspace Emissary, it is still a lot of fun. My one quibble is that there’s no co-op option for any of the single-player modes.

Anyway, with those out of the way, let’s move on to this year’s Selections.

Honorable Mentions:
• Fidel Dungeon Rescue – For its charm and carefully crafted approach to randomly generated puzzles.
• Kirby Triple Deluxe – For bringing me back into the Kirby fold, its little nostalgic touches, and a long and memorable final boss fight.
• Hob – For being a solid and beautiful Zelda-style adventure.
• BOXBOY! – For its simplicity and sometimes devilish inventiveness.
• Puyo Puyo Tetris – For its chaotic yet sublime mashups of the title franchises. 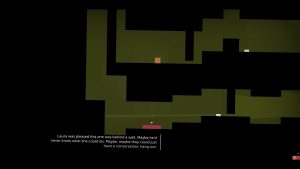 Thomas Was Alone
Bithell Games | Windows | 2012
As a puzzle-platformer, Thomas Was Alone is good, sometimes clever, and at times inconsistent in its difficulty. What elevates this game to something more is the characterization of the colorful quadrilateral avatars, provided by onscreen text and pleasant narration. Adventuring with the AI Thomas and his newfound friends proved to be quite a good time; this game is the type of indie rarity which makes for an easy recommendation for just about anyone. As with so many other games on this list, I would like to say more, but believe that it is best experienced for yourself. 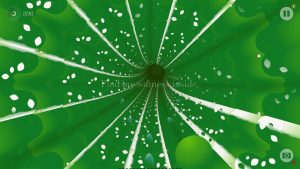 Luxuria Superbia
Tale of Tales | Windows | 2013
Here’s another game where some simple text transforms the whole experience. On its surface, Luxuria Superbia is a digital coloring book of sorts. Simply paint the tube you travel down to complete each level; the more color you apply, the faster and more intense the action gets. Throw in some (sometimes corny) pillow talk, and you now have what’s possibly the most erotic game ever made. Out of the four Tale of Tales games I played in 2018 (I still haven’t gotten around to the fifth and final title in my backlog, Sunset), this was my favorite, and the most successful of the bunch. 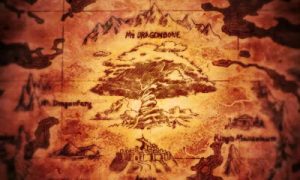 Etrian Odyssey V: Beyond the Myth
Atlus | DS | 2017
I’ve been playing the Etrian dungeon crawler series for about as long as I’ve been running this blog, and have stuck with it through its highs and lows. Etrian Odyssey V is, I’m happy to report, one of the highest of highs it has reached. Eschewing the massive, but ultimately boring, overworld mechanic from Etrian Odyssey IV, this latest entry gets back to basics, with all the exploration confined to the legendary tree Yggdrasil. New additions such as campfire cooking make an already great formula even better, and the story and dungeon designs are amongst the best and most interesting in the series. If you play just one core Etrian game in your life, make it this entry. 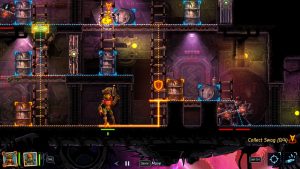 SteamWorld Heist
Image & Form | Windows | 2016
Not too many strategy RPGs break from an overhead and/or isometric point of view for its battles, but SteamWorld Heist does, and pulls it off very well. Battles take place within the cross-sections of spaceships, and require you to aim your weapons as opposed to selecting an enemy within range. Set in the same universe as SteamWorld Dig, Heist shares that earlier game’s Western-inspired setting, slick visuals, and finely-tuned gameplay. Unfortunately, also like Dig, Heist has a rather generic story, this time centering around a band of renegades who take on an oppressive government, though the gameplay is engaging enough that I didn’t mind too much. 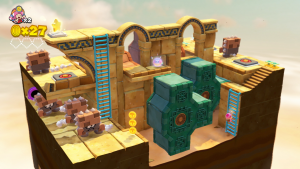 Captain Toad: Treasure Tracker
Nintendo | Switch | 2018
Like Mario Kart 8 Deluxe on last year’s list, Captain Toad is a port of a WiiU game that I had wanted to play, so picking this up was a no-brainer. Also like MK8D, this is a great game with a lot to do. There’s a wide range of puzzles, plus a handful of secondary goals, all presented in small and colorful Mario-esque worlds. Captain Toad and Toadette have their limitations—neither can jump, for example—but that just adds to the challenge. I’m not sure that the few bits of new content are worth double-dipping for if you’ve played the original, but for the rest of us, it’s a great addition to the Switch’s library. 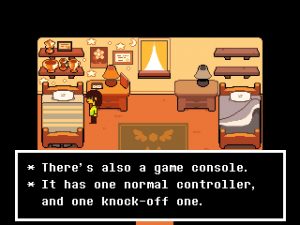 Deltarune: Chapter 1
tobyfox | Windows | 2018
How does one follow up a massive indie hit with a (sometimes scarily [note: spoilers in link]) devoted following? If you’re Toby Fox, you might want to subvert what you did before. That seems to be the main thrust behind Deltarune, a game that shares some surface similarities with Undertale but is a different beast deep down. It is cheerful and inviting, yes, but also slightly more grounded and cynical. It’s also a must-play for anyone who enjoyed Undertale. Deltarune: Chapter 1 is easily this year’s biggest surprise (its very existence was first hinted at only a day before its release) and the final completed work, whenever that will come about, should be a fascinating thing to play. 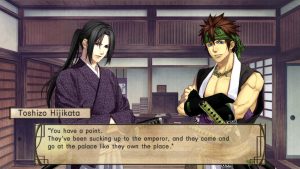 Hakuoki ~Stories of the Shinsengumi~
Design Factory/Idea Factory | PS3 | 2014
This was a pleasant surprise. I’m a relative newcomer to otome games, but certain unflattering tropes that tend to crop up in them—bland heroines, sometimes unsavory bishounen, and so on—has made me a little wary of them. Hakuoki is a rather violent entry in this genre, but otherwise, it’s a riveting story about an earnest young woman and her adventures with the handsome men of the Shinsengumi, a police force of sorts that existed in Kyoto during the tumultuous Bakumatsu period. I have only completed two of the main endings so far, the Normal one and Hijikata’s route, but hope to play a few more, plus some of the bonus side stories, in 2019. 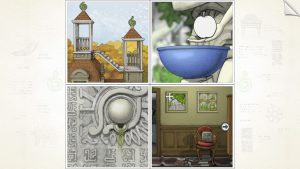 Third Place
Gorogoa
Buried Signal | Windows | 2017
In this exquisite puzzle game, the player moves and taps on panels around a limited field of four squares, zooming in on details, lining them up to match each other, breaking them apart into a frame and a new picture, and so on, to unfurl a story about a person’s life and certain events which have taken place within it. This story is told in broad strokes, leaving many details to the imagination, but the craft that has gone into not just the beautiful illustrations, but everything else, more than make up for its shortcomings. As with other point-and-click adventure games, there isn’t much replay value, though if you’re like me, you may want to give it another go to try and get a better sense of the story, or simply to enjoy the whole magical experience again. 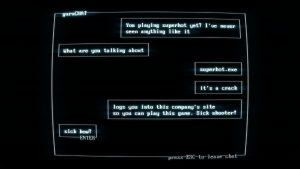 Second Place
SUPERHOT
SUPERHOT Team | Windows | 2016
One of the most pleasant things to witness in gaming is when a simple yet novel new twist to an established formula is executed very well. Such is the case with SUPERHOT, a first-person shooter where the flow of time is affected by the player’s movement. Move, and everyone else in the scene moves with you; stay still, and all motion slows down to a crawl. Every one of these puzzle-battles occurs within stark white rooms, with glasslike red men serving as your enemies. The story framing all this takes place on a retro-style internet, but becomes weighted down by some ambiguous cyberpunk gobbledygook as it wears on. Despite that, SUPERHOT proves to be both SUPER and HOT. SUPERHOT. SUPERHOT. SUPERHOT. 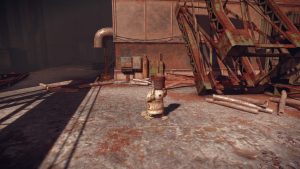 First Place: Game of the Year
NieR:Automata
Platinum Games | Windows | 2017
Given my previous Game of the Year, this feels a bit like a cheat, but there really wasn’t a better title I played this past year. While not quite as good as its predecessor in terms of story or characters, NieR:Automata makes up for it with satisfying combat, exploration, and questing, courtesy of one of the world’s finest dev teams specializing in action games. Director Yoko Taro’s latest tale in his DrakeNieR universe is set many thousands of years in the future, where androids and extraterrestrial Machine Lifeforms wage endless war. Familiar weapons are ripe for collecting and upgrading, the innocent die in horrible ways, and people (and those who try to act like them) are ultimately proven to be terrible and pointless. In other words, it’s A Yoko Taro Game, and we are all the richer for it. 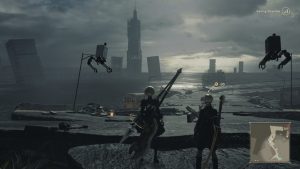 Here is where I would typically go into more detail about the game I have chosen as the best I played in the past year, but in this case, there’s a full-length review for you to refer to. Perhaps one day I will do a long, spoiler-heavy post about why I found 9S repulsive, an interesting little Drakengard 3 connection, certain details from the light novel adaptation that aren’t as obvious within the game itself, and on and on and on, but today is not that day. At any rate, if, in the future, there is a new entry in the DrakeNieR franchise that is at least as good as this one, then don’t be surprised if it too comes to occupy my Game of the Year slot.