Feeling too tired to delve deeper into the story-heavy Tales of Legendia, and knowing that Etrian Odyssey was much lighter in that respect, I finally got around to starting the latter this afternoon. I had bought a copy listed as “New” from an Amazon Marketplace seller several months ago. The shrinkwrapping was surprisingly poor for Atlus, the case had some minor imperfections, and though the manual was present and in perfect shape, the usual DS Health and Safety Guide was missing. That said, I suppose I shouldn’t have been too surprised to find a save file on the cart once I fired it up. I had never left feedback for the seller, and it’s way too late to do so now, but I did file a complaint regarding the wrongly-labeled condition of the item. 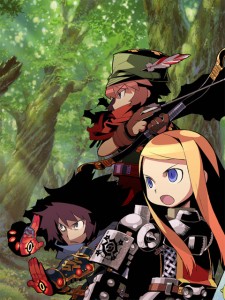 Anyway, the game. I’d been intimidated by Etrian Odyssey, which is my main reason for putting off playing it for so long. Not because of its storied difficulty, but because of the map-drawing mechanic. Somehow, I had gotten the impression that the mapping tools enabled players to design the dungeons, including item, event, and enemy placements. I don’t know why I thought this, as it makes no sense, but there you go. It turns out that the mapping tools are not there for design, but actual cartography. Unlike other dungeon crawlers, which automatically draw the maps for you as you explore them, Etrian Odyssey makes you do the hard work. Maps have to be painted in, walls drawn to denote borders, treasure locations noted, and so on.

All this takes place in the land of Etria, where there’s just a town, and a labyrinth of a forest. Officials in the town are rewarding adventuring guilds for exploring the labyrinth, and the player is in charge of such a guild. The town contains all the necessities: an equipment store, a guildhall to create and manage party members, a hotel to rest and save at, an apothecary for healing purposes, and so on, and then there’s the untamed wilderness of the labyrinth, filled with random battles against monsters and things to do and see.

Navigating in the towns is done entirely through menus, while travel in the dungeon takes place in a 3D first-person point of view on the top screen, and on the map grid on the bottom one. Battles are carried out in the classic Dragon Quest style: your entire party’s commands are entered in before each turn, and still images of the enemies are shown on-screen with accompanying battle effects. The difficulty of said battles lives up to the game’s reputation, and I expect it will only get harder from here. Also throughout the dungeon are treasures, odd crystals which I don’t quite know the purpose of yet, and little events that are activated either automatically, or when the A button is pressed after a prompt.

So far, I’ve completed just one mission, and found an odd loophole in the midst of it. The beginners’ mission requires talking to a knight stationed within the first floor of the labyrinth; he asks you to map out a certain area before letting you pass, in order to complete the first task of mapping said floor. However, after I’d satisfied the knight, I did some backtracking to find areas I’d been to before, but died in the middle of (the only save point that I know of so far is in town; fortunately, newly mapped areas can be saved when the Game Over screen is reached). In the middle of this backtracking, I found a place I hadn’t mapped that appeared to be within the boundaries that the knight had originally specified. I don’t know if this was an oversight, a bug, or if I really didn’t have to map the whole area, just most of it. Doubt it’s the latter, though, and a quick look at a GameFAQs doc verified that the knight wanted the whole space within the set boundaries mapped. It should be interesting to see if there are any other such quirks as the game goes on. So far, it’s got the simple atmosphere I was hoping for, and holds my interest enough to me to stick with it. Not sure if it’s “engrossing” yet, but I can certainly see it becoming so.

Special Stage: Totally unrelated, but I rambled on a bit about the Compilation of FFVII and related matters in my LJ early this morning. I hope at least some of it makes sense.