If you’re a regular reader, then you may recall that I absolutely loved the original NieR. Despite its many problems, most of which were gameplay-related, there was so much care put into the aesthetic sides of things that I came away with a new favorite. Its sequel, NieR:Automata, ably answers the question: what if the gameplay was just as good as the story, world, characters, and music?

As NieR maker cavia is long gone, development duties for Automata were handled by Platinum Games, the beloved studio known for its slick action titles. Some key talent from the ol’ NieR staff were involved as well, most notably director Yoko Taro and composer Keiichi Okabe. This turned out to be a fruitful collaboration, resulting in one of the finest JRPGs released in some time.

I didn’t play it on a console, however, but on a computer. As such, the first thing I did after installing Automata was patch it with FAR. This mod, which is short for “Fix Automata Resolution”, offers a number of graphical tweaks that publisher Square Enix couldn’t be bothered with, and I highly recommend it to anyone who chooses to play the PC version.

Anyway, on with the review. Upon starting the game, the very first sequence is a top-down shmup. Although there were a small number of similar sections in the first NieR, there are a lot more of them in Automata, largely thanks to flight units controlled by our android protagonists. From there, we move on foot to a string of fights mixed in with some light platforming. A crazy battle against a massive boss ensues, and then the game starts proper. 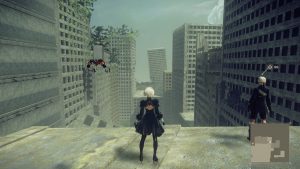 The aforementioned androids are 2B and 9S, models made for fighting and intelligence gathering respectively, who work for an organization called YoRHa. It is 11,945 AD—some 8,500 years after the events of the first game, and nearly 7,000 years after aliens invaded the Earth with robotic “machine lifeforms” serving as their soldiers, sparking the first of over a dozen wars. Operating out of a space station called the Bunker, YoRHa sends its androids to the surface to do battle with the machines on behalf of the remnants of humanity, who reside on the Moon. I wish I could talk more about the story—which is grim yet fantastic—in this review, but, even with a spoiler warning given ahead of time, such discussion would make this post at least twice as long.

The aloof and logic-minded 2B is our primary playable character. Along with two melee weapons she can have equipped at a time, she comes with a small hovering robot, Pod 042, who provides ranged and special attacks. Her AI-controlled sidekick, 9S, is less cold, but quite a bit prejudiced when it comes to machines. Guided by Operator 6O, who provides support and instructions from the Bunker, 2B, 9S, and their Pods spend their time exploring the desolate, ruined world; taking on sidequests; and fighting the machines, who have started to evolve in unusual ways.

Both the flight unit and on-foot combat is smooth and satisfying. 2B can execute a slick dodge that recalls the one in Bayonetta, and the addition of regular ranged attacks thanks to the Pods adds a bit more variety than the first NieR had. 2B can be customized with upgradable chips that enhance offense, defense, speed, and other stats, or even grant convenient little abilities, such as being able to pick up items automatically. Special moves for the Pods can be swapped in and out as well. 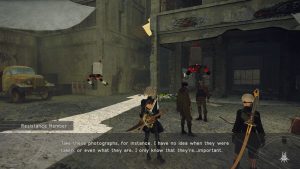 Outside of battle, there’s sidequests and fishing, both of which are much improved from NieR‘s iterations, though the latter is a bit more pointless this time. The sidequests have generally better rewards, often including hard-to-find crafting materials, and are not as headache-inducing as certain NieR quests I could name. These quests also frequently serve as mini-stories which help to flesh out the world, and range in tone from funny and uplifting to melancholy and depressing. Meanwhile, the fishing is Animal Crossing-style, using simple button presses to toss out your lure (or Pod, in this case), then reel it in when there’s a bite.

The overall story is as nihilistic as the previous NieR‘s, but thanks in large part to dozens of documents which can be found, it’s also easier to understand without having to run to an external resource. These documents are scattered all over the world, and most of them start to become available after the first ending is reached. On a related note, one thing I liked was that the weapon stories (a tradition in the Drakengard/NieR series) are in-game this time, rather than in a Japanese-only artbook, as was the case with NieR. These stories unlock piece by piece as a weapon is upgraded, and are often dark tales about a previous owner. Some of these tales even tie into the plots of the previous games, which is a welcome touch.

Speaking of which, there are a handful of other callbacks that crop up throughout Automata, including at least one that can be rather shocking to NieR players upon encountering it. A major difference between the two’s stories, however, is in how multiple endings are handled. Unlike in NieR, Automata‘s first major ending leaves out the biggest revelations; for those, one has to complete the next two loops. At first, I wasn’t sure if I liked this new arrangement, but it worked quite well in the end, with far less repetition in subsequent story loops than NieR had. There are even some new and newly fleshed-out gameplay mechanics after Ending A is reached—such as the return of NieR‘s visual novel segments—as well as some cheeky playing around with certain video game standards. Another change is in the number of endings: not only are there five related to the core plot, instead of four, but also twenty-one gag endings which trigger under certain conditions. 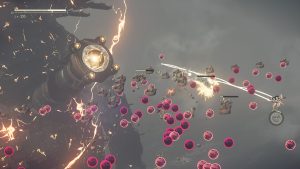 Visually, Automata is another step up from the striking but often muddy NieR. The character designs retain some ridiculousness—especially the fetishistic YoRHa androids—but are also just as memorable. In particular, the machine lifeforms strike a very effective balance between cute and menacing, with their beady eyes and mostly expressionless faces. The various areas, which include a ruined city, vast desert, and forest with gigantic trees, are likewise effective, though sometimes a little frustrating to get around; for example, though it seems like some of the empty buildings can be entered in certain spots, invisible walls block the way half the time.

Finally, there’s the music, which is once again one of the best game soundtracks of all time. Okabe is one of those rare video game composers who really knows how to take advantage of that most versatile of instruments: the human voice. The compositions themselves don’t slouch either, as is demonstrated by certain remixes which crop up starting from a specific point in the story.

I’m gladder than ever that I played NieR, as it gave me a good excuse to play NieR:Automata, a fantastic game in its own right. Most of the janky charm of the original is gone (most; as noted, there’s still an annoyance or two), but in the end, it’s for the better, and the story being told is as strange and complex as ever. If you’re sick of the same old thing in JRPGs, NieR:Automata is definitely worth playing.