It wasn’t the greatest system, to be sure. The PS3 would eventually get more exclusive JRPGs, and the whole red ring debacle affected us directly at one point. However, the 360 did have one of the best video game controllers ever made, as well as a few great exclusives. One of these was Forza Motorsport 2, which wound up being a much better experience than my previous time with a racing sim, Gran Turismo 3: A-Spec. Forza 2 was approachable and flexible in how it could be played, and that kept me playing on and off for several years after I first picked it up. These days, my racing sim of choice is Project CARS on PC, but I wouldn’t have so much as considered it if it didn’t contain certain crucial elements I liked in Forza 2.

And then there’s Da Haloz. The moody, Master Chief-free Halo 3: ODST remains my favorite of the bunch, despite the permanently unlocked audio logs and now-ubiquitous autosaving. However, I also have fond memories of playing the original Xbox’s Halo 2 on the 360, as well as then-newer titles Wars and Reach. Halo: Combat Evolved Anniversary was a blast as well, even with my spouse cheekily meleeing his way through the co-op mode. Halo 3‘s plot was kind of messy, but 4‘s was even worse, and I haven’t bothered to care as much about the franchise since, though I still dip my toes in every once in a blue moon, such as with the PC port of Halo: Spartan Assault. 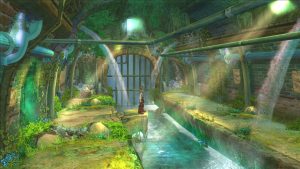 On the third-party end of things, a few of the 360’s exclusives were JRPGs, including two I played, Eternal Sonata and Tales of Vesperia. The former is to this day one of the prettiest action RPGs I’ve ever played, and has good music and a decent battle system, but the story is weirder than usual for this genre, especially towards the end. As for Vesperia, well, I discussed that recently and don’t feel like I have anything else to add. As it happens, my favorite JRPG on the system ended up being a multiplatform release: my personal Game of 2017, NieR. A lovable mashup of genres with great music and a thought-provoking plot, NieR is also my favorite JRPG of the previous console generation (so far; I have a pile of PS3 games yet to work through), and one of my favorite 360 games overall.

NieR was one of a handful of multiplatform games I enjoyed on 360. Amongst those others is Bayonetta, a campy and sometimes problematic romp that, gameplay-wise, is the closest thing to perfection that I have experienced in the character action genre. Needless to say, Bayonetta 2 is one of the Switch ports I was most happy to see happen, and it’s currently sitting in my backlog. I also enjoyed Sonic Generations, one of three good-to-great Sonic games to have come out in the previous gen (the other two being Colors and Unleashed). Persona 4 Arena‘s visual novel-styled story mode was entertaining as well, though it ended with some unanswered questions that would later be addressed in a lackluster sequel.

Some of my best times with the 360 were playing co-op games with my spouse. There was the aforementioned Halo: Combat Evolved Anniversary, of course, but what was even more fun was Diablo III: Ultimate Evil Edition. We’re both longtime players of Blizzard’s games, so being able to play this one together in the same room was a treat. I also spent many idle hours watching him play whatever triple-A title had caught his attention at the time. Drunk taxicab hailing in Grand Theft Auto IV (“Yellow car!“), picking apart the meta-story of the Assassin’s Creed series, and the shocking ending of Prince of Persia are memories as ingrained in me as my own times exploring New Mombasa, pursuing the Shadowlord, and shooting bullets from the ridiculous guns strapped to my ankles.

With the 360 now gone from the entertainment center, there’s more space for the remaining systems—Wii, PS3, PS2, and Switch—to breathe. It was a behemoth, to be sure; the largest and heaviest bit of hardware of them all. We haven’t given any serious thought at all to getting an Xbox One, mostly because most of the current-gen games we want to play are on systems we already own: the Switch, 3DS, and/or PC. Bitprophet occasionally wonders if we should get a PS4, but we’re not quite ready to make that commitment. I doubt we’ll ever get a Microsoft console again, but the one we did have served us well.