Let’s Play! And After That, Let’s Really Play!

Xenogears is one of those games that I had long been curious about, but didn’t want to play, both because and in spite of its reputation. I didn’t like Xenosaga Episode I: Der Wille zur Macht, mainly due to its sedate dungeons and overlong, poorly-paced cutscenes, and didn’t relish the thought of slogging through its predecessor. However, at the same time I wanted to know why Xenogears has commanded such attention. Therefore, when a new Let’s Play of the game by The Dark Id appeared at the Let’s Play Archive, I dove right in. 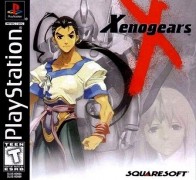 "All shall be mocked accordingly..."

It turns out that I had made the right decision. Seemingly every new dungeon, rare as they are, is described as the worst in the game; the story has some interesting ideas but is needlessly complicated, poorly plotted (a good example: that old JRPG trope, the battle tournament, is used as a major plot device twice), and did far more telling that showing; and from the looks of it, the staff had just about run out of money when it came time to work on Disk 2. The Dark Id’s humorous asides, especially the ones involving sandwiches and/or Citan Uzuki’s dickery, plus his astoundingly thorough analysis of the game’s quirks, made all this the more digestible; I’m sure I would’ve experienced Chrono Cross levels of rage if I had played this myself.

This Xenogears Let’s Play is easily the longest one I’ve ever read, and took me some time to get through. Not long after wrapping it up, I decided to play a new game. I’d already finished with Rune Factory: Tides of Destiny and given up on the original Tropico after finding it a bit too difficult, and not the fun kind of difficult, either. Also, I wasn’t in the mood to pick up Sonic Colors or Pokemon White again. There was that damned-cute-moogle-fest Final Fantasy: Crystal Chronicles, which I was (and still am) playing co-op, but I needed a new single-player game. So, the new game I played? Bayonetta.

For the next three days, I found myself immersed in the closest thing to a masterpiece I have played in the action game genre. Bayonetta is marvelous, with slickness, humor, and outrageousness in abundance. The title character is a strong, sexy, and ridiculous gunslinger and a great follow-up to a certain other beautiful mixed-race hero from an earlier game by the same director. Speaking of which, there are several homages in Bayonetta—some more subtle than others—to director Hideki Kamiya’s previous works, to certain classic Sega franchises, and to games that have nothing to do with either. My favorites of these made me absolutely giddy as this already awesome game got even better. In general, there is so much love put into Bayonetta—love of the heroine, her world, the action, and of video games themselves. I don’t know if I’ll ever experience another game like this again.

The next game I played only took me two days to get through, but has a much longer title: Penny Arcade Adventures: On the Rain-Slick Precipice of Darkness, Episode One. This was one of several games I picked up during this past December’s Steam Holiday Sale, and more or less on a whim at that. The game itself plays a bit like a weirdly balanced JRPG with notes of graphical text adventure and that unmistakeable Penny Arcade feel. It was all right, and I’m looking forward to playing Episode Two sometime soon, in part because one of my favorite PA characters, Charles, makes an appearance.

After Rain-Slick Precipice, Episode One, I decided to delve back into the world of Caribbean island management—but via Tropico 4 this time. The campaign this time around is a long one at twenty missions, but once I got to a certain point, the previous starting islands began to make repeat appearances. This was a little disappointing, as were the moments when the sound would stop during a cutscene, or the one time during the final mission where the game crashed, or the few other tiny annoyances presented themselves, but I was still engrossed for a good two weeks. In many little ways, it’s much improved from Tropico 3, and I ended up spending more time playing it than I do with a lot of JRPGs. I wrapped up the campaign this afternoon, so now I’m going to step back from it for awhile and catch up on just about everything I’d been neglecting in the meantime, such as, well, this blog…