Once upon a time, there was a dystopia called the Junkyard. The people of this land were divided into six factions, each one designated by a specific color, and their never-ending fight for the right to enter Nirvana was overseen by a seventh entity, the Karma Temple. One day, life in the Junkyard changes when a strange girl emerges from a cocoon, and all of the residents receive the powers of demons. The battle is ratcheted up a notch as the presence of these demons, or Atma, require the residents to start eating each other to remain sane. 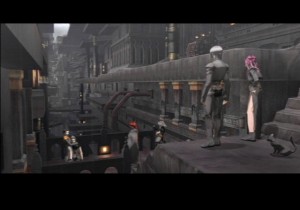 Right from the outset, Shin Megami Tensei: Digital Devil Saga is not your typical JRPG, and the plot only gets more complicated from there. By the time the game ends, you are left with a cliffhanger and many unanswered questions, all of which are addressed (in a sometimes sloppy manner) in Digital Devil Saga 2. Throughout their journey, Serph and the other characters grow and change, find old emotions and uncover pasts and events which they had forgotten or never even known. They’re the types of characters one can get attached to, and even the most unlikable of all, the volatile Heat, ends up being more than he seems.

While the story may be a refreshing departure from the anime fantasies of most JRPGs, the battle and character growth systems are quite familiar. Here, the biggest outside influence on the Digital Devil Saga duology seems to be Final Fantasy X. Not only is one able to swap characters in and out during the midst of battle, but the ability systems in both games take forms that resemble the Sphere Grid. By spending in-game currency at save points, characters can unlock different ability sets, called Mantras, for their Atma to learn. In Digital Devil Saga, Mantras are arranged in a clear, mostly linear map, but in the sequel, this is replaced by a hexagonal grid that not only allows more freedom, but is also tougher to navigate. Once a Mantra has been paid for and set, Atma Points, which are used to master said abilities, can be earned by defeating and/or devouring enemies during battle. It’s a straightforward, elegant system that, while not being quite as complex as the Sphere Grid, does its inspiration proud. 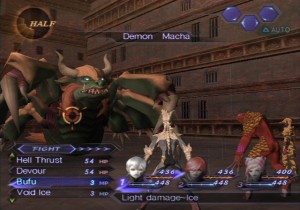 Going back to battles: one of the game’s most distinctive features is the “Press Turn” system, which makes what would otherwise be a staid turn-based affair into something more dynamic. At the beginning of each round in battle, every character and enemy present receives a turn. These turns can be added to or subtracted from by pulling off certain moves. For instance, attacking a monster with a spell type it’s weak against, or with a critical hit, will add a turn to your party’s current round. However, if you miss in your attack, or cast a spell that an enemy can block or absorb, a turn or two can be lost. Skipping a character will cost half a turn, combo attacks cost two or three, and there are other, specific ways to manipulate the number of turns per round, especially in the second game. It’s the type of system that requires careful strategizing and can also get your party into trouble very quickly, especially in the later dungeons. There have been times when I enter a random battle and the enemy goes first—only to be completely wiped out by them without doing anything, because they attacked with spells my party were weak against, or happened to pull off a completely successful instant-death move on everyone. Fortunately, these occurrences were infrequent enough to be merely annoying rather than frustrating, but at the same time, they’re a notable flaw in this otherwise ingenious system.

The game’s general aesthetic is another notable feature. The character designs have a unique style to them, and the world eschews the Judeo-Christian and Buddhist themes of many other JRPGs for Hinduism—from the concept of Nirvana, to enemies visually based on the likes of Vishnu and Ganesha, to the simple mandala designs found throughout both games. Voice acting ranges from tolerable to excellent, leaning more towards the latter overall; unfortunately, the sound mix for the battles nearly drown out any present voice snippets entirely. The guitar-driven soundtracks are decent, and DDS2’s is especially good, with heavy electronica leanings and an engaging, beat-infused main battle theme that trumps the first game’s more sluggish one.

When I first began fleshing out my PS2 RPG collection, it took me quite awhile to find these two games at a decent price (I eventually snagged them off of eBay in a single lot for $100). Despite the occasional annoyances with instant-death battles and having to grind late in both games in order to take down some particularly tricky bosses, I greatly enjoyed them. They were each a good length—roughly 35-40 hours apiece—and although some bits of the story ended up being vague and nonsensical in DDS2, I liked the world and the characters. There’s more about the DDS duology to enjoy than I’ve discussed here, but in general, if you’d like to play a dark, mature RPG with large, complex dungeons and challenging battles, these two games are worth looking into.