Game Progress: In the Grip of Nostalgia

I haven’t been doing much gaming lately, as I’ve been feeling under the weather. Because of that, I’ve put off beating Digital Devil Saga 2 (though I started playing again this weekend and hope to wrap it all up shortly); I like being fully awake and non-headachey for RPGs, especially those I’ve never beaten before. I did start Klonoa 2: Dream Champ Tournament, but am currently stuck on a part that, again, I want to be in a clearheaded state to play, otherwise I just know that I’ll never get through it. Oh, and I gave up on Billy Hatcher and the Giant Egg, convinced that Sonic Team hates me. 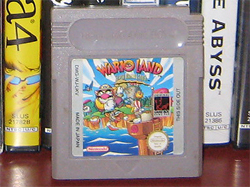 Not wanting to put any more time into DDS2 yesterday, and not wanting to touch Klonoa, last night I dug out the GBA I bought awhile back and the cart of Wario Land: Super Mario Land 3 that had arrived not too long ago. Back in the day, when my sister and I were kids, the only way we could play many games was through our friends and cousins. However, my sister did get a Game Boy as a gift at some point, and her small library of games included Kirby’s Dream Land, The Lion King (which stank), and Wario Land. Kirby is good, but I’ve no desire to play it again, as the games which followed in the series give me my nostalgia fix well enough, even though I’ve no particular attachment to said games.

On the other hand, I have never derived such satisfaction from later Wario platformers, so instead of giving more of those a chance, I went right back to the source, which I hadn’t played in at least fourteen years. Playing through a handful of levels last night, what I was most amazed by was how much I’d remembered. This wasn’t a case where I could get through every single level easily, knowing where every single enemy and hazard was. Rather, familiarity was at work. It’s like going back to a place which hasn’t changed much over the years and being able to pick out even the most insignificant landmarks. Only thing is, here, the landmarks are things like Wario’s pith helmet, the Sugar Pirates, the item blocks with the eyes on them, the skull doors, the 10 coins, the bottles which give Wario special abilities, and the ways in which they and many other elements all come together.

So yeah, it’s a real nostalgia trip, unlike any other I’ve ever had, probably due to the length of time since I last beat it and now. The one thing that’s bugging me at the moment is a small crumb caught between the GBA’s screen and the glass layer on top of it, which I won’t be able to get rid of without a special type of screwdriver (I’m looking into borrowing one). Funny thing is, even though I can be picky about things like that, so far it hasn’t lessened my enjoyment of Wario Land.