For several years, I posted “roundups” of all of the games I played in a given year. After the 2011 edition, I lapsed on this and have not written one since. Having to remember every game I played in a 20xx and write up a little something about it got to be tedious, and didn’t play well with my inherent laziness.

All that is why, when I decided to revive this feature, it was with new restrictions. This time, I will be covering only ten games: those which left the strongest impressions on me within a given year, regardless of release date. This restriction also enables me to write a bit more about each game.

So, without further ado, here’s my ten for 2015, presented in the order in which I played them. Following each title is the developer/author, the platform I played the game on, the release year on said platform, and my obligatory summary. They are not ranked, except for my personal Game of the Year and its runner-ups, which were relatively easy choices, at least for this installment. 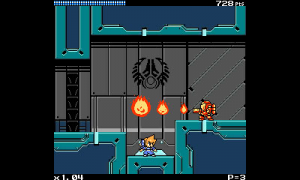 Mighty Gunvolt
Inti Creates | 3DS | 2014
Although I am not a big fan of anything that resembles Mega Man, this game charmed the pants off of me. Few “retro” style games that truly want to be “retro” ever come close to the faithfulness to the era that Mighty Gunvolt achieves: here, it really does feel like you’re playing an NES game. The art and music are lovingly crafted, as is the localization from the original Japanese, which sprinkles bits of “Engrish” throughout. The biggest aspect which feels “modern” is the difficulty, which isn’t as punishing as its predecessors, but that’s all for the better. 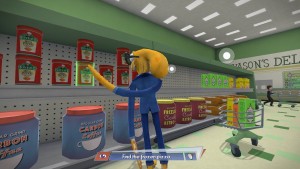 Octodad: Dadliest Catch
Young Horses | Windows | 2014
And on the opposite end of the spectrum is Octodad, which forces the player to unlearn everything they know about controlling video game characters. The player character is a giant octopus masquerading as a human surburban father, and controlling him—through a scheme where arms and legs are affiliated with analog sticks and shoulder buttons—is as difficult as you might expect, given the circumstances. Not drawing suspicion to yourself in your everyday life is the goal of the game, a lighthearted sitcom of a tale which comes complete with a catchy theme song (but no laugh track, thankfully). Although a certain part came off as slightly unfulfilling, there’s nothing else that would cause me not to recommend this. 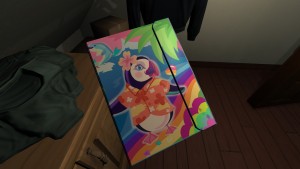 Gone Home
The Fullbright Company | Windows | 2013
This is one of those games I put off playing for awhile due to the neverending hype and discussion surrounding it, but I finally did so this year. What it ended up being was an exploration through a massive old house that was alternately nostalgic, goofy, and suspenseful, a miniature 1990s teenage soap opera told in first-person in-between references to Bratmobile and The X-Files. That this tightly crafted, intimate little story generated as much controversy as it did is bewildering. Gone Home is—somehow, bizarrely, sadly—groundbreaking for the video game medium in its everyday mundanity and small human dramas, but it’s also good, and hopefully this sort of thing will become more commonplace in the future. 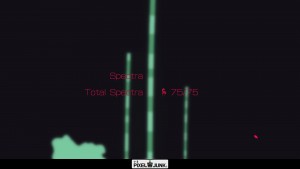 PixelJunk Eden
Q-Games | Windows | 2012
I play few platformers anymore, not so much for lack of interest (Kirby burnout notwithstanding), as that there haven’t been any really good ones in awhile. I came to PixelJunk Eden not knowing much about it, but finding within it just the refreshing sort of platformer I needed. The visual style is minimalist overall, but can get pleasantly noisy sometimes in a structured Sonic Youth sort of way, and it’s accompanied by some cool electronic music and suitable sound effects. The physics are floaty but believable; the diminutive player character moves around like it’s in water. Although the paths weren’t always clear and, thus, it became way too easy to get lost in certain late-game levels, I had a really good time with PixelJunk Eden. 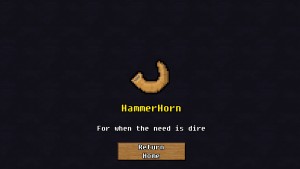 You Must Build a Boat
EightyEightGames | Windows | 2015
This game, the follow-up to 10000000, almost didn’t make this list. It’s on here because I returned to the game again, months after first beating it, to go after more crew members and achievements. That’s when I fell back into its rhythms. With more tile types and general complexity than 10000000, my original feeling was that You Must Build a Boat was too overwhelming, and somewhat inelegant. Somehow, this doesn’t matter any longer. Its density and mechanics have their own kind of beauty and rhythm, and it has proven itself to be just as well-balanced and addictive. That, plus the new rooms and crew members that get added over the course of the game gives it more character than 10000000 ever had. That’s not to say that YMBAB is better than 10000000, but it is most definitely a worthy successor. 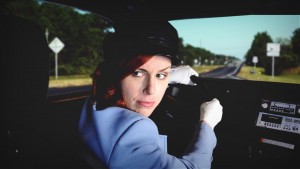 Roundabout
No Goblin | Windows | 2014
This game is unlike anything else out there. It’s got a groovy 1970s setting complete with funk music, rounded chunky fonts, trippy drug references, and suitably toned live-action FMVs. The story centers around Georgio Manos (pictured), a silent protagonist and up-and-coming revolving limousine driver. With the support of her comrades, she ferries people all over town and deals with various bits of drama. Oh yes, and as her title implies, her limo does indeed revolve around and around while she drives, which is where the challenge comes in. It’s all very silly, a little bit difficult, rather fun (and funny), and over all too quickly.

Neko Atsume: Kitty Collector
Hit-Point | iPhone | 2014
My husband and I waffled on trying this out for ages, and a patch from earlier this year which added an English-language option basically gave us little excuse. So, one day over the US Thanksgiving weekend, we each downloaded Neko Atsume from Apple’s App Store. What a great decision that was. A few times a day, after setting out food and toys, we check to see which stupidly cute, beady-eyed cats have visited us. Another aspect which has won us over: it’s free to play, with microtransactions available, but we’ve never once felt the pressure to buy any extra gold fish (the top-level in-game currency). We just take our time and enjoy these adorable digital felines at our leisure. 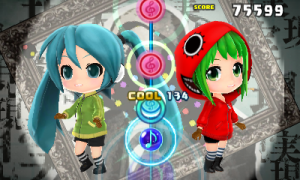 Third Place
Hatsune Miku: Project mirai DX
SEGA | 3DS | 2015
I’m afraid I might be biased when it comes to this choice: I’m a fan of Vocaloids, and Miku in particular, plus I also have a soft spot for both Nendoroid figures and tactile rhythm games. Project mirai DX features a robust selection of songs featuring music software developer Crypton’s beloved stable of Vocaloids: classics, fan favorites, and lesser-known tracks spanning a nice range of styles and BPMs, from many of the best producers in the scene. There are even a few songs with additional vocals supplied by special guest GUMI (aka Megpoid), a Vocaloid published by Internet Co. Ltd. All of the characters are represented in their chibi Nendoroid forms, thanks to a collaboration with Good Smile Company, and have a certain lively appeal to them that the blander, regularly-proportioned Project DIVA models lack.

The touchscreen-based gameplay mode is a joy to play (the button-based one isn’t too shabby either, though not as much fun), and there are several diversions—a room to decorate, character outfits, reversi and Puyo Puyo minigames, a music player, etc.—that are entertaining ways to take a break from the main rhythm section every so often. Despite the rare misstep (such as a certain pair of popular but overly repetitive songs), it’s a must-have for 3DS-owning Vocaloid fans, and probably the best rhythm game on the system overall. 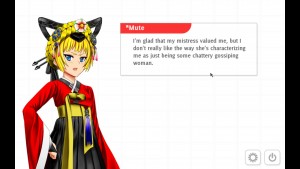 Second Place
Analogue: A Hate Story
Love Conquers All Games | Windows | 2012
Stories with a strong sociological bent are still relatively hard to find in games. While my 2015 manga slate was filled with brilliantly humane works like Vinland Saga, My Love Story!!, and Assassination Classroom, there hasn’t been much like those on my gaming one. Analogue: A Hate Story is one of the rare exceptions. Like (the absolutely amazing, seriously it’s a masterpiece) Ōoku: The Inner Chambers, Analogue is a feminist examination of a specific period in Asian history. In this case, it’s an extremely repressive Korean society recreated on a long-lost starship, whose story is told through the logs maintained by, and the commentary of, a pair of AIs named *Hyun-ae and *Mute.

What follows from there is a dense, intertwined tale of family, hierarchy, social expectation, doomed romance, dashed expectations, and horrific violence, with the occasional bits of humor, which helps lighten the mood from time to time and rounds out the characters. It’s a gripping tale, one as fine as in any good comic or prose story I read this year, and I’m looking forward to playing its sequel, Hate Plus, in the year ahead. In fact, Analogue was all set to be my personal Game of the Year, but then something else came out… 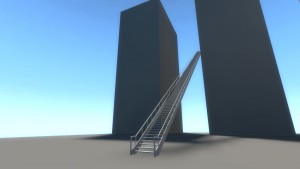 First Place: Game of the Year
The Beginner’s Guide
Everything Unlimited Ltd. | Windows | 2015
I really don’t know where to start with this one without giving away what happens during a certain scene, a scene that matters so much when it comes to how this story is ultimately interpreted. When that scene happened, I understood much more, but only to a point. By the time the game ends, there’s at least two apparent large plot holes and some uncomfortable unanswered questions, which aren’t helped by the fact that the entire thing has been narrated by Davey Wreden, the creator of The Beginner’s Guide, seemingly playing himself. There’s also that cryptic dedication…

I’m going to dig further into this now, and although I won’t reference anything too specifically, there might be some parts that could be considered spoilers, so turn around if you need to. 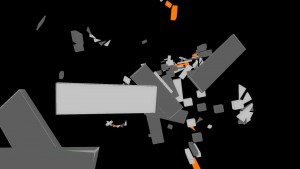 What The Beginner’s Guide is ultimately about (or at least it seems so to me) is audiences, the great bugbear of creators everywhere, and how uncontrollable they are. It left much the same impression on me as The Wind Rises, Hayao Miyazaki’s final film, which dealt with a similar theme on multiple levels. In that film, which is based on true events, an inventor does amazing, innovative work but finds that his lofty ideals don’t line up with reality. Such is the situation in The Beginner’s Guide, where Davey takes us through a tour of the works of “Coda”, a friend who has dabbled in game development before suddenly stopping. Who Coda is and what their works really mean is beside the point. It is Davey and his presentation of Coda’s games which really matters here.

The result is a fascinating, but somewhat worrying, journey through all sorts of unfinished first-person games. There are a lot of dialogues that go nowhere, enclosed spaces, and strange surprises. Davey is not wrong to have interpretations of these creations. The wrongness that is present becomes evident later on, and, in the end, I don’t blame Coda for their actions, though perhaps they were somewhat naive in how they handled their games. It’s an interesting and ultimately heart-wrenching story about creation, interpretation, modification, and everything in between. I wonder if anyone who isn’t a creative type of some sort would get it. I wonder, like many others, if this is based on something which really happened. I do not wonder if this sort of thing continues to happen in the real world, because I know it does. It sucks, but it still happens. It happens to a lot of us, and though it might take awhile, things will be okay again.