(…though not necessarily in that order.)

It’s the day before we leave for Seattle for yet another awesome late summer weekend at PAX Prime and, as usual, what this means still hasn’t completely sunk in yet. Part of this is likely due to poor sleep and being kept busy with various things, mainly the chores and errands that always have to be done pre-PAX. However, this will likely change on PAX Eve, as it typically does.

In the meantime, I’ve been finishing up a few games and such. First off was the most frustrating Tropico 5 DLC I’ve yet encountered: “The Supercomputer”. The mission included here starts you off in the next-to-the-last era with the regular, bare-bones starting buildings—which is fine. What isn’t fine is the strict time limit to reach the next era, plus the expensive building and maintenance requirements involved. I had a lot of trouble balancing these tasks with keeping my economy from imploding and making sure all the citizens were happy. Eventually, I got through it on my regular difficulty settings, but it took at least a dozen restarts until I found the magic formula.

Next up were an unusual pair of portable games: one was a Game Freak game that didn’t have “Pokemon” in the title, and the other was a non-Game Freak game that did. That first one was HarmoKnight, a downloadable 3DS rhythm game which I beat yesterday. It had been on my radar for quite awhile, and I finally picked it up in the form of a Club Nintendo reward. It was an enjoyable mix of platformer and rhythm game, though some of the harder levels made me wonder if I’m still cut out for this sort of thing. I guess I’ll find out for sure sometime after Hatsune Miku: Project mirai DX gets here next month via Play-Asia. 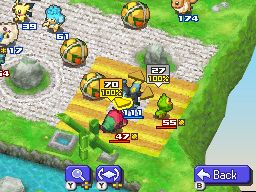 The non-Game Freak Pokemon game was Pokemon Conquest, which I’d started the day before HarmoKnight and beat today. Aside from some random rounds of Pokemon Stadium at a friend’s place back in the day, it’s the first and only Pokemon spinoff that I’ve played. It also happens to be one with an unusual lineage: made by Tecmo Koei, Pokemon Conquest is a strategy RPG crossover between the Pokemon franchise and the extremely niche Nobunaga’s Ambition. It’s a game that, when it was first unveiled, I thought was never, ever going to be released in the US, but somehow, Nintendo made it happen. I’m kind of glad they did, though; the setting is strange, but it’s a pretty decent all-ages SRPG that happens to feature Pokemon.

Now that I’m through those, I should probably get back to Picross DS, which has continually overwhelmed me with its massive amount of content. Fortunately, I don’t have many more puzzles left to go (I think), and then I don’t plan to play anything else this series for awhile, not even after Picross 3D 2 comes out here (at least, I hope it comes out here). However, part of me also wants to start up a proper Game Freak-made Pokemon again with Pokemon X. This is the last Pokemon game I need to play in order to consider myself caught up with the series; as much as I love Hoenn, I’ve no plans to play Omega Ruby or Alpha Sapphire. Also, after X, I will have played a game in every major Pokemon setting except for the first generation’s, though I suppose I can always check out Kanto in SoulSilver‘s postgame if I really want. I’m still not 100% sure I should be playing a new main-series Pokemon game less than a year after beating SoulSilver, but hopefully it won’t wear me out on the franchise too much.

Finally, I suppose I should explain the “picks” part of this post’s title. For some time, I wrote annual “Gaming Roundup” posts where I listed everything I played in a given year and some brief impressions. Unfortunately, these posts took a lot of work to compile and I slacked off on them after the 2011 edition. I decided a little while ago that I’m going to bring back year-end wrapups, but do them differently: this time, I’m only going to talk about my top ten favorite games that I played this year, and maybe a few others that left strong enough impressions. Recently, I went through the games I beat so far this year and put together a preliminary list, and it’ll probably be rewritten a few times before 2015 bows out. I can’t say this has been a fantastic year, gaming-wise, though there have been a few really great games that I’ve played. Of course, there will be more about said games, and others, around the end of the year.