One of the older, better-known Neon Genesis Evangelion-related fan projects out there is ToastyFrog Thumbnail Theatre, which, in addition to other properties, distills all 26 episodes of the original Eva TV series into snippets of snarky commentary. My favorite is the one for the famously controversial Episode 26. In this Thumbnail Theatre, main character Shinji is personified as series director Hideaki Anno, his mecha EVA-01 is Evangelion itself, and so on. As silly as it is, it also makes a whole lot of sense.

The Rebuild of Evangelion movies, the first one of which was released in 2007, and the fourth and final one due for sometime in the future, don’t have Thumbnail Theatres, since Jeremy Parish doesn’t do that sort of thing anymore, but if they did, I imagine they might start off a bit like this:

(Lots of Rebuild of Evangelion spoilers ahead; familiarity with the original Neon Genesis Evangelion is highly recommended.)

It’s hard not to see the Rebuild movies as a cynical cash grab, because that’s what they are, and this becomes more and more evident with each new installment. There is more fanservice than that which Misato famously promised (and delivered) during the original series, and the merchandising blitz which followed has reached the point where an action figure is being made of an Eva unit which has only been seen in a brief preview for the final movie. All this would be okay if the new movies delivered a great experience—after all, I personally consider the manga spinoff of the original TV show to be superior to its source material, so such a thing wasn’t impossible. Unfortunately, the new movies do the Evangelion canon, and particularly its characters, a tremendous disservice.

UN: We are the Evangelion fanbase. We are ready to support you, but will also scrutinize your actions.

Let’s start with the world. In this alternate retelling of the original series, the Second Impact still happened in Antarctica at the turn of the millennium, but this time, it has left a strange permanent atmospheric effect over the sky of the former continent, and the world’s seas have been stained red. The overgrown ruins surrounding Tokyo-3 are a memorable sight when we first lay eyes on them. Many specific locations are very similar or exactly the same as they were before. So far, so good. There are also a lot of construction cranes, which seem to be present mainly for visual impact than any practical purpose, as though Evangelion‘s art direction was being taken in an Utena-esque direction. In short, the cranes are a sign that this new Eva is going to be anything but subtle.

Evangelion 1.0 (later 1.11 for its second home video rerelease) is a retelling of the first two major story arcs from the TV show, and while it succeeds in recreating many of the key moments from said show, it alters others, to baffling effect. Shinji’s a colder, more cynical personality than before, who smirks when Misato scolds him for disobeying orders. His developing friendships with Kensuke and Toji are barely explored, while the battle against the (spectacularly redesigned) angel Ramiel is unnecessarily drawn out. Misato is pretty much the same, until you come to the part where she takes Shinji down into Terminal Dogma and shows him Lilith, a secret which had been kept from her for most of the original series. In that moment, it becomes crystal clear that this is a whole new Eva, and a major part of Misato’s personal history and motives have been scuttled through this one scene. This is just one of many, many plot points which has been altered, and not necessarily for the better.

While Kensuke and Toji have become mere window dressing for the first movie, it pales in comparison to the travesty that has befallen Asuka, starting with the second. At the beginning of Evangelion 2.0, Shinji’s still a bipolar mess, Rei’s become a weird mix of cold and motherly (more on that later), and we’re introduced to two new Eva pilots. The first, a whole new character named Mari, is completely pointless. A mix of otaku-favorite moe traits topped off with a carefree personality that jars with those of the other pilots, Mari’s sole significant contribution to the movies’ plot thus far has been showing off EVA-02’s inexplicable “Beast” mode.

The second pilot is Asuka Shikinami Langley, and it’s not just her name which has changed. She is still an accomplished genius, and still prideful, though any warmth which she had before has been sucked out of her. The attraction to Kaji (who has been sidelined even more than Shinji’s friends) is completely gone, and instead, she’s much more obviously the generic tsundere in Shinji’s small harem. Her ego has only become even more inflated, as evidenced by the second movie’s rendition of the team battle against Sahaquiel, one of the few that has required all three of Japan’s Evangelions; afterward, Asuka laments that she couldn’t do anything… by herself. Later, she takes over Toji’s role as the test pilot for EVA-03 and delivers a monologue to Misato beforehand, explaining things about her that the movie’s creators can’t, or are creatively unable to, show.

Telling instead of showing seems to be the Rebuild series’ favorite shortcut, as another monologue—delivered by Fuyutsuki to Shinji in the third movie—straightforwardly reveales a couple of the great vague mysteries of the series: what happened to the latter’s mother and who Rei Ayanami really is. Any mystique that the characters might have held has been stripped away, and has become the sole province of the more action-oriented aspects of the universe: namely, the angels and Evas.

When things are shown instead of told, they sometimes don’t make sense. In the original series, Shinji is sometimes seen practicing the cello; it is a small part of his character, but a noteworthy one nevertheless. In Rebuild, his being a musician has been sidelined up until the third movie, when Kaworu encourages Shinji to play a piano with him; it turns out that the latter, though never having played before, is quite good. Why does this happen? An even more baffling bit of nonsensicality in Evangelion 3.0 (aka Evangelion: Q) occurs earlier on: it’s some ten years later, and all of the Eva pilots still look fourteen years old. Asuka explains this as being the Eva’s “curse”, but it seems to be something more ominous: the curse of anime marketing in Japan, where tie-in products ought not to feature any girl older than, say, nineteen, lest they risk being relegated to bargain-bin status. 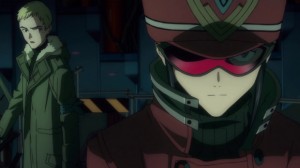 Misato: I am GAINAX, the company you helped create. I have since gone off and done other interesting things.

These details aside, the third movie is interesting in its own way. After Shinji triggers a partial Third Impact in his doggedly tenacious attempt to save Rei at the end of the second film, Evangelion 3.0 starts off with the former being awoken ten years later to find that the world has been upended, and most of NERV has defected to form a rebel faction called WILLE. Interesting world-building is hampered by sometimes sluggish pacing and bad animation, and then, after Fuyutski’s “Yui Ayanami” speech, it all falls apart again, as Shinji becomes single-minded in a goal laid out for him by Kaworu. Kaworu, who is the only character of note from the original show who has arguably been improved upon (though his manga counterpart is still better), realizes the flaws in their plan in seemingly enough time to prevent another disaster, but Shinji’s gone bananas by then, leading to an ending which has destroyed whatever small amounts of goodwill had been built up before. As in the previous film, there are whole new Evas, because of course there are, and the pilots have new or altered plugsuits, because c’mon, the figures won’t sell themselves.

Despite all of this, and as I’ve already pointed out here and there, there are some things I like about the Rebuild movies. In addition to much of the new Tokyo-3/Geofront background art and some of the angel redesigns, a handful of scenes are really well done; my favorite is a gag scene from the second movie showing Shinji and his classmates going through a decontamination process at a marine science facility. The second movie also features a few musical pieces borrowed from His and Her Circumstances, which shares its main composer, Shiro Sagisu, with the Eva franchise, and is a nice easter egg for fans of his work. Also, aside from some obvious CG and the third movie’s animation inconsistencies, the overall production qualities are quite good.

As the fourth movie, which has Evangelion 𝄇 as one of its titles (the symbol at the end is the “end repeat” sign from musical notation), opens, Shinji (1996 Anno) will have to deal with a world he is losing control over, while Gendo (modern Anno) presides over it all, hands folded in front of his face and noting that everything’s going exactly according to plan. It is, too: the movies have done very well at the box office, lots of new merchandise has been sold, and the franchise is bigger than ever. Seen this way, it’s no wonder Shinji (1996 Anno) lashed out like he did at the end of Rebuild 3.0; all meaning was rapidly going to shit, and Kaworu was going to be dead soon anyway because that’s how things always work out, so he might as well just get it over and done with.