I meant to post here not long after beating StarCraft II‘s Terran campaign, and to devote an entire post to my impressions of the story and campaign structure, but I got sucked back into Dragon Quest IX so quickly again. Also, I’m a procrastinator.

Seriously, though, DQIX is incredibly addictive. I finally saw the credits roll yesterday afternoon, and though the basic meat of the plot is relatively straightforward and shouldn’t take too long to complete, thanks to all of the other things to do, my beat time was 125:27:02. And there’s still a lot more left in the postgame! However, I’m not even thinking about that stuff right now. For the time being, I’m Dragon Quested out.

"Darlin', when I squint my eyes at you, you better listen."

What else has been going on with me, gaming-wise? As I said before, I beat the StarCraft II: Wings of Liberty campaign. The missions had an incredible amount of variety compared with the original and Brood War, but in general, they also felt easier (it must be noted here that StarCraft II‘s campaign has difficulty settings; I played the entire thing on Normal). The easier, more diverse play compliments a story that, while serviceable, lacks some of the raw… je ne sais quois of the previous games. Certain things, most notably Raynor’s relationship to Kerrigan, are less ambiguous, and there is more humor and in-joking than ever before. One minor pop culture reference in particular was, while silly, somewhat anachronistic considering the setting.

Some of this can be attributed to the new structure in place for the between-mission bits. Instead of a dingy briefing room with an android adjutant, where you are a commander working with General Duke or whoever, you are an observer aboard a battlecruiser, with Raynor as your main character, a detached sort of avatar. A more human angle has been given to the story in the form of Raynor’s conversations with his shipmates and others, but in exchange, something has been lost. I’m not sure which approach I prefer.

The character models and voices are also worth mentioning. Raynor still has his smooth Southern drawl and still squints when he’s upset, but his face is no longer lean, but meaty, and he has an equally meaty build to go with it. His hair is darker as well. Kerrigan, in brief glimpses of her old human form, is more fair-skinned than I imagined her to be through StarCraft‘s crude character portraits, and I’m not too crazy about her new voice. Mengsk and Zeratul fare better, and in general, the new characters are well done.

I think I have a pretty good idea of at least some of what the next campaign, the Zerg one, might bring. It doesn’t have quite the same magic as the original (and its expansion), but StarCraft II is still damn good, and I’m looking forward to the rest. 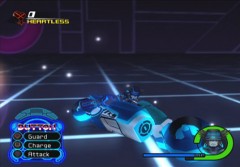 Another thing I played recently—well, more like messed around with: Kingdom Hearts II, believe it or not. Compared to the original and even the low-key GBA spinoff Chain of Memories, KHII felt like weak sauce, dumbed down with a convoluted and contradictory story, QTE-style special attacks, and some Disney worlds that, design-wise, paled in comparison to their Kingdom Hearts equivalents. However, it did have some redeeming qualities, like the improved Gummi Ship schmup sections, a certain visually stunning minigame in the Hundred Acre Wood, and a few great worlds, like Space Paranoids, the KHII home of Tron.

My husband became curious about the upcoming movie Tron: Legacy after we saw a trailer before Inception. Neither of us had seen the original Tron, though I was familiar with its reputation as an early pioneer in the field of computer animated special effects, and so we rented it. Tron wasn’t very good story-wise, but it was a visual treat, and reminded me a lot of its appearance in Kingdom Hearts II. Wanting to show KHII‘s Tron world, Space Paranoids, to my husband, I fired up the PS2 and loaded up my starred save game. Unfortunately, I had forgotten how to travel between worlds, so I did a lot of needless backtracking before finally caving in and looking up how to do it. As I traveled through Space Paranoids—including Light Cycle and Solar Sailer rides—and recalled my experience playing through the story bits, I saw just how much of the movie had made it into the game. In this respect, Space Paranoids is no different from most other worlds in the series, but considering that I hadn’t seen Tron until now, it was neat to gain this new perspective on it.

The last couple of games on my recent agenda have been Plants vs. Zombies and Kirby Super Star. In the former, I killed lots of time in two (successful) attempts to get a couple more Steam trophies. The latter’s last and toughest minigame took me a long time and many attempts, but I finally beat it on the last day of August. I had a good time with both games, though Kirby took a little while to grow on me.

That’s about all for now. The next game I plan on starting is Metroid Prime (the Wii-enhanced version), and after that, Etrian Odyssey II. I’ve also been neglecting my Pokeymans, so I suppose I’ll have to pick up Platinum again as well. Oh, and I’ve added some more links to (where else) the Links page. On a related note, if you haven’t noticed, I’ve also made a few small cosmetic changes to the site over the past couple of months. I don’t know if I’ll do any more such tweaking, but it’s certainly not out of the question, and if you spot anything that looks out of place in the meantime, please let me know.