The JRPG For This Generation

It’s StarCraft 2 Day! Actually, the UPS man won’t get here with my copy of the Collector’s Edition until later, so I won’t be starting the Southerners in Space Wings of Liberty campaign until this evening at the earliest. I have much to do in the meantime, anyway. Such as brushing up on StarCraft canon, for starters; I remember the original (“vanilla”) game’s plot pretty clearly, but need to rewatch much of Brood War‘s cutscenes. On the non-StarCraft front, I’ve taken up DDR again, and want to sink more time into Dragon Quest IX.

Ah, DQIX. Originally, the plan was to beat the game before today, but as time went on, I realized that this would be an impossibility. I’m currently some forty hours in and (by my own rough estimate) a bit of a ways from the end—not because of any steep difficulty or lengthy story, but due to the fact that there’s so much to do in between main quests. 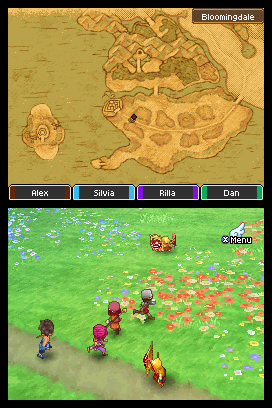 The central story revolves around the player hero character, this time an angel—sorry, Celestrian—who gathers the thanks of earthly mortals to feed the Yggdrasil Tree. Something bad happens, and the quest starts in earnest. The bare-bones plot moves forward by means of smaller, compact stories that occur in each new town the hero visits. Naturally, this bite-size approach to questing is ideal for lots of side-questing and other distractions. One of these is the Alchemy Pot, a modern-day Dragon Quest mainstay which is used to fuse multiple items into new ones that are stronger, rarer, or just all around better than what they were before. New to the series is a job/class system, reminiscent of—but not entirely comparable to—the ones in certain Final Fantasy games.

The job system is only one indicator of how different this Dragon Quest is from its predecessors. The look of the hero is entirely customizable. There’s also the other party members, none of which have the distinct names and personalities of the past, and can either be randomly generated or created from scratch. In terms of the world, the Goddess has been replaced with a male Almighty, and the abstract religious symbols typically seen in the series are different in most places. All enemies are visible when walking across the field, and in dungeons. Certain things have been tweaked easier, though the overall difficulty feels about the same as ever. Much has already been written about the ad-hoc multiplayer features and the platform that its on (it’s worth noting that nearly the entire game can be controlled with the touchscreen, which, incidentally, is how I’ve been playing it). It’s no wonder that, in Jamin Smith’s review at VideoGamer.com, he felt the game was more like a spinoff than a true main-series entry.

However, despite all of change DQIX has brought with it, two hallmarks of the series shine throughout: its aesthetics, and its quality. There is no mistaking this as anything but a mainline Dragon Quest, with all its Koichi Sugiyama musical stylings Akira Toriyama visuals, and much more care and polish than any of the (still great) spinoffs get. The controls are intuitive and, though the menu arrows could be a little larger for those of us using the stylus, sensible. The graphics and sound are among the very best on the DS. The game itself is diverse, easy to play on-the-go, and addictive. On top of all that, all of the new stuff (at least that which I’ve dealt with so far) is well done, and much of it enhances the overall experience; the visible enemies is one feature I would love to see in all future entries. This is a Dragon Quest for today, a JRPG for those who doubt the viability of the genre in a time when WRPGs have stormed consoles like FPSes did before them. It makes me want to play more, and also to wonder what a Dragon Quest MMO would be like.

It’s going to be really hard to juggle this and StarCraft 2.