Mystery Dungeon: Shiren the Wanderer was my first “real” roguelike, and it was fantastic, but also nerve-wracking. I almost didn’t want to beat the game. It wasn’t because I was enjoying it too much, though there was some of that, too. Rather, I was afraid of the consequences I would face should I fail. Already I had died numerous times, and after every instance, I was whisked back to the starting town of Canyon Hamlet with all experience and stat boosts vanished into the aether, and all of the items and money on my person gone as well. To have this happen to me once I passed the point of no return, and with some excellent customized equipment to boot, would’ve been devastating. Such are the risks in Shiren, but it made the joy and sense of accomplishment that much sweeter once I reached my final destination.

Shiren is a DS port of a 1995 Super Famicom game, and a spinoff of a Dragon Quest spinoff. This latter bit is important, since the music in a certain dungeon struck me as very Koichi Sugiyama, and lo and behold, it turned out that the DQ series composer was responsible for Shiren‘s excellent soundtrack. While I was playing, it was pointed out to me that the lack of absolute permanence in death separates it from the oldest adherents to the roguelike genre, including Rogue itself. In fact, not only is death impermanent though inconvenient (for the reasons I stated in the first paragraph), but starting over again and again is encouraged. There’s not much to the main story, but to take full advantage of the game’s features and build Shiren up into a warrior worthy of taking on Table Mountain’s heights means completing various sidequests, most all of which require several cycles of restarts from Canyon Hamlet for maximum effect. These sidequests typically involve helping other people in the area, and the results can be anything from a new party member to a free stat boost. 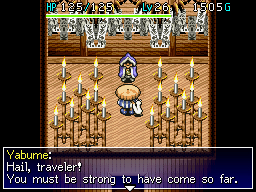 This is a game that, much like life itself, rewards perseverance, patience, and effort. Though it’s not for everyone, for fans of tough-as-nails dungeon crawlers, I can’t recommend it enough. A Wii sequel, simply released in the US as Shiren the Wanderer and said to be more forgiving than the Shiren of old (a la Final Fantasy Fables: Chocobo’s Dungeon), came out earlier this week and has been getting good reviews so far. I definitely plan to pick it up sometime, but not right away, because, you know, RPG-heavy backlog and all.

Since wrapping up Shiren, I’ve moved on to another of my Must Plays for 2010, namely, Chrono Cross. Even before starting this game, my feelings on it were mixed. This was due to a blend of my strong affection toward its immediate predecessor, Chrono Trigger; the varied opinions on the game floating about on the internet; and the overexposure I had to Yasunori Mitsuda’s soundtrack, thanks to places like the now-defunct Gaming FM. Still, I wanted to keep an open mind, and went into the game knowing as little about it as possible.

I’m currently about twelve hours in, and am finding it to be… interesting. It has appropriated some of Chrono Trigger‘s better ideas, the most noticeable one being the lack of enemies on the overworld, and has thrown in a few cute tiny references to said previous game, from familiar lines and names to certain musical themes. There’s other throwbacks as well, but what’s most striking about Chrono Cross is what is different. Instead of time travel, the theme this time around is parallel dimensions and alternate histories, which is intriguing on its own, but I can’t help feeling that more could’ve been done with it. Maybe more will be, but something tells me that the Cross world won’t approach the depth and variety of Trigger‘s.

Another thing that’s substantially different is the battle system. A great amount of emphasis is placed on physical attacks, which are separated into three tiers, based on accuracy and power, and each one costing a certain number of turn points. The successful execution of these attacks tie into the use of Elements, which serve as both magic and healing items in this game. On top of that, Elements come in six colors, and their usage affects the overall field of battle, as well as the effectiveness of summoning, which I haven’t had a chance to mess around with yet. It’s a complex-looking system, but easy to grasp the basics of after a few hours. Unfortunately, it’s also rather dull, due largely to the physical attack emphasis I mentioned at the beginning. The generally low difficulty curve doesn’t help either.

The writing in Cross leaves much to be desired. Main character Serge is a silent hero, like Crono was before him, and I don’t have much of a problem with that. Other characters, however, are too vague about their motivations, fickle in their treatment of me, and/or generally don’t provide enough of a reason for me to care about the fate of this alternate world that I’ve found myself in. Kid in particular seems to have been designed as Cross‘ answer to Trigger‘s Marle, but she’s neither as interesting nor as fun as her predecessor. There’s also the matter of pacing, and when and how certain scenes are triggered. For example, I could explore an entire town and listen to various people discuss how to get into a certain place for no apparent reason, then go into an area I bypassed early on, only to have a cutscene happens where Kid goes, “Hey, let’s try to get into (certain place)!” Now you wouldn’t think this would be a problem, but going by the dialogue and the town’s layout, I got the impression that I was supposed to go to this specific area first, and then find out the details on how to get into the place that Kid mentioned by exploring the town.

Anyway, I’m sticking with Chrono Cross, just to see where it all winds up, and also to see if my experience will improve any.

Special Stage: First up, some sad news: P.S. Triple’s run on 1UP officially ended last week. No new strip, just a goodbye message, and a reminder that the iPhone apps are there if anybody wants ’em. I’ll miss the adventures of Triple and the others, especially X-Locks and most especially Saygah, who I’ve since made my avatar on CAG. I’ve also been working on a piece of Triple fanart, but it’s not done yet; knowing me, it might be awhile. Anyway, thanks for the fifty strips you did bring us, Micro Magazine and Mission One!

Gus Mastrapa’s piece “21st-Century Shooters Are No Country for Old Men” is a lamentation of being a thirtysomething FPS gamer in a landscape dominated by youngsters. I haven’t touched an online multiplayer FPS in at least five years, but I can totally see where Gus came from in his article. The most remarkable part of this piece was the comments section. On GameLife, whenever there’s this many comments on a piece, it usually means there’s a good old fashioned flamewar going on. However, the comments here are from other adult gamers, like Gus, who have encountered teenagers and college students on virtual battlefields, and all the frustrations that can ensue. They shared their own stories and gave tips for how to enjoy oneself as an older FPS player. Great stuff all around. If you don’t want to wade through it all, there’s a follow-up piece here, highlighting some of the best comments and emails Gus got.