Yesterday I beat Final Fantasy Fables: Chocobo’s Dungeon, despite being tired and feeling generally sluggish. Managed to get through the last wing of the dungeon and the final stage all right, partially because I had finished a particularly tough optional dungeon and gotten a really sweet reward from it that served me well for the endgame. There is a decent amount of postgame content, but some of it requires a ton of grinding (and therefore, way, way more dungeon crawling) and even though I enjoyed the game a great deal, I need a break from it for awhile.

Yeah, Chocobo’s Dungeon is very good indeed. Though I’ve played dungeon crawlers before (most notably the excellent Dark Cloud 2), I’d never touched an actual roguelike/mystery dungeon game before this one. Although Chocobo’s Dungeon eases some of the pain of dying in ways which are more forgiving than your average “true” roguelike—dying in a dungeon still means you’re stripped of your loose items and cash, but here, you at least get to hold onto your equipped gear and accumulated experience—it is still not without challenge, and has given me a taste for the genre. In this sense, much like how the Mario RPGs lend a lighthearted, but not stupidly easy, approach to traditional JRPGs, Chocobo’s Dungeon seems to do the same for roguelikes. 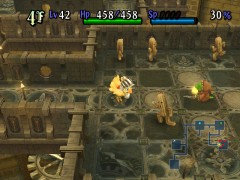 One of the game's titular dungeons.

The story is one which I covered somewhat in my previous post, but I’ll rehash it here again, while giving some additional details. Chocobo is the partner of Cid, a treasure hunter. While after a treasure called Timeless Power, they get whisked away to the realm of Memoria, and the town of Lostime, where the Bell of Oblivion regularly makes the townsfolk forget the past with each ring. Not long after Cid and Chocobo’s arrival, an egg drops down from the sky, and a green-haired baby hatches from it. Strange events follow, and Chocobo gains the ability to enter randomly-generated “mysterious dungeons” generated from the Lostime inhabitants’ memories. Some dungeons are required to progress through the story, but many more are optional, have strict rulesets, and forbid the use of outside items, even equipped ones. These “special rule” dungeons are often insanely tough and always require careful planning, but the rewards gained are typically very useful and range from the opening of new type of stores to the acquisition of new jobs. More about the latter as we go on…

Navigating and fighting in these dungeons is a breezily-paced, yet entirely turn-based, affair; every move forward on the map, every use of an item, every attack—all of it takes up turns. As such, moves have to be planned carefully if one doesn’t want to be creamed by the monsters who inhabit these dungeons. In addition, there are both harmful and beneficial traps and treasures scattered throughout the floors, many of which are hidden or unidentifiable without using certain moves or items. Being randomly-generated, the dungeons largely consist of simple tilesets, but at the same time, this being a spinoff of the Final Fantasy franchise, they’re made to look as detailed and appealing as possible.

Wrapped up in all this is a new take on the Job System, the classic Final Fantasy trope that has appeared in many of the series’ games. For those not familiar with jobs, they are essentially entire ability sets, separated out according to the job title; thus, you have black mages which specialize in harmful magic, and knights which can pull off various physical attack moves. Chocobo’s Dungeon doesn’t have the wealth of jobs that are in, say, Final Fantasy Tactics, but there are still a good variety of them, and they are all different enough from each other to recommend certain ones for certain dungeons. 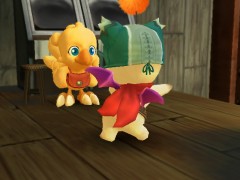 Who is that masked moogle?

So, the dungeon crawling and battle system is meaty and addictive. How about the rest? Getting around in the world is fairly easy overall, though the entire game is plagued by those much-loathed loading screens. There’s a decent crafting system to improve upon weapons bought and/or found in dungeons, as well as fishing and gardening sidequests which don’t have to be messed around with much and have some good payoffs. Overall, the graphics are all right, with some particularly nice aesthetic touches lent to the monsters, which are mostly unique takes on classic Final Fantasy baddies such as Bombs, Lamias, and Tonberries. Animation, particularly in cutscenes, is passable; oddly enough, the mouth positions in particular seem to be part of the overall movement cycles, and I highly doubt matching lip movements was a concern, even in Japanese. For most of the game, I used the Classic Controller; the quick item menu option in the dungeons would only work half the time, if that, but otherwise the controls were all right. However, for the minigames in the Mog House, the Wii Remote was required. I didn’t play these much, and the best one was Pop-Up Duel, which looks to have been directly ported from the earlier DS title Final Fantasy Fables: Chocobo Tales, where it wasn’t so much a diversion than a big part of the overall game. Speaking of Chocobo Tales, the script in Chocobo’s Dungeon is much better than the former game’s, with none of the forced humor, and a greater focus on drama. Finally, the soundtrack is nothing short of wonderful, consisting largely of inoffensive arrange tracks of classic Final Fantasy tunes, ranging from the familiar (the classic “Prelude”) to the unexpected (FFXI’s “Tarutaru Male”, among others).

In general, Final Fantasy Fables: Chocobo’s Dungeon is a solid second-tier Final Fantasy spinoff, and a game well worth checking out for RPG-starved Wii owners, and those wanting a good dungeon crawler in particular.