END_OF_DOCUMENT_TOKEN_TO_BE_REPLACED

Brain Scrap House originally took the form of a short-lived column for Clidus‘ now-defunct gaming site Fantasy World XD (you can read both installments via the Old Stuff page). Later, as okamiblog was dying out, I remade it into the site you see here, which went live on May 7, 2009. Ten years and change later, during which the title was changed into the punchier “Brainscraps.net”, I’m still here, writing about (and eventually making) video games for I don’t know how big an audience. Thanks to all of my visitors over the years, whether or not I know you personally. I hope to keep doing this for awhile yet.

Brainscraps’ original look. I can’t remember where I got the header image the first time around.

To celebrate this anniversary, Brainscraps has gotten a new look which was directly inspired by the site’s original Sonic the Hedgehog-themed design; for this remake, the header’s source image came from Sonic Retro. Brainscraps also now has a dedicated Twitter account,
@Brainscraps_net, which will include announcements of new posts and projects, and should hopefully have far fewer retweets than my main one. But wait, there’s more! A Brainscraps group has been founded on Steam, primarily to house a Curator page dedicated to the many PC and Mac titles featured in the annual Gaming Selections posts. Membership is currently restricted, meaning that you must request to join or receive an invite, since I’m not sure that I have the time to moderate a forum. This might change in the future, though; we’ll see.

As for any future anniversary-related stuff, I’m planning to revisit at least one of the games covered during the site’s first year of operation. If all goes well, expect to see new writing about Startopia, Ys VI: The Ark of Napishtim, and/or Halo: Combat Evolved sometime before next May (and before anyone asks, Chrono Cross is absolutely, completely, 100% out of the question). I also have a special project in the works which will be launching within the next week or two, so keep an eye out for it!

Finally, I feel like I should explain why this post is nearly a month overdue, and also why I haven’t posted at all since January. In early April, bitprophet and I moved back to the East Coast, and during the months leading up to it, we were both busy with preparations to do so. After a long, cross-country drive, we spent another month and a half setting up our new place, taking two trips (one planned and one unplanned), and dealing with other odds and ends. In case you’re wondering, I did manage to squeeze in some game time during all that, beating Bayonetta 2, Splitter Critters, and Witch & Hero III; getting roughly halfway through Disgaea 4 and Kirby’s Dream Land 2; and continuing on in Pokemon GO and Super Smash Bros. Ultimate. I’ve been also trying to keep up with my manga, but my current backlog is a bit heavier than usual. I’d like to write about some of this media consumption soon, but in the meantime, a belated Happy Birthday to Brainscraps, thank you for reading, and hope that you’ll all continue to stick with both me and this site.

Two years have passed since my 2016 Manga Selections, and now I’m finally going to come back at you with a whole new slate of recommendations. Since that post, I’ve finished most of the manga featured in that older article, with the exceptions being the still-ongoing My Hero Academia, Wandering Island, One-Punch Man, Vinland Saga, and Yotsuba&! (all of which are still great), so the time was right. As in 2016, to qualify, I had to have read at least one volume during the past year (and therefore, the fantastic Ooku: The Inner Chambers will once again have to wait for a future installment).

To refresh your memory as to how this is all set up, the series are presented in alphabetical order, and this year, for the first time, my top three are ranked at the end. After each manga’s title is the author(s), then the North American publisher, the first year of Japanese serialization, and the number of volumes I’d read up until the end of 2018 (followed, in parentheses, by the total number of Japanese volumes). Series printed in omnibus or other special editions are denoted with an asterisk (*), but the numbers reflect the original volumes as they were first printed in Japan. Finally, all of the cover images used here came from Right Stuf or the publisher’s website.

END_OF_DOCUMENT_TOKEN_TO_BE_REPLACED

Another year has ended, and with it, another pile of games beaten. My Backloggery breakdown for the previous year once again wound up in the negative, but what else is new? I can’t speak for whether this has been a great year for gaming, as the vast majority of what I played were pre-2018 releases, though I did enjoy myself.

If you’ve read one of my past year in review posts, you know the drill: every game here is one that I’ve beaten or completed in 2018, regardless of release date. This time, in addition to my top ten and five honorable mentions, I’d like to give special shoutouts to two games.

END_OF_DOCUMENT_TOKEN_TO_BE_REPLACED 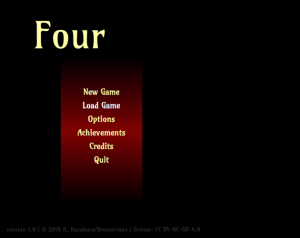