As usual, it’s been too long since my last post. Since then, I saw the rest of Nier‘s endings, rewatched the Utena movie, finished that Pile o’ Tezuka as well as three manga series that I’d been reading for awhile (My Love Story!!, Master Keaton, and Otherworld Barbara), and went on my first trip to Hawaii, among other things.

I’ve also been getting back into playing short games on the weekends. This time around, in addition to indies, I played a couple of promotional tie-in games, one of which was excellent for what basically amounted to an ad. Let’s get to discussing them all, shall we? 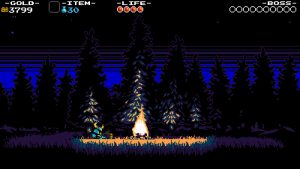 A disclaimer before I begin: the version of the game I have is Shovel Knight: Treasure Trove, though this review is only for the main campaign. The other campaigns originally began life as free updates before the overall name change, but they’ve been put on the backburner for now.

Anyway, on with the review. When I first tried out Shovel Knight at PAX Prime one year, I was impressed by how much closer it hewed to the aesthetic of 8-bit games than other indie titles inspired by that era; the color palette and the insistence on showing single screens one at a time were its most memorable touches. After playing through the main campaign, it’s clear to me now that it’s not quite a true 8-bit throwback—I doubt it could run on a Nintendo Entertainment System without some further modifications—but it still plays as solidly as I remembered from that short session.

Some apparent inspirations for this platformer include Mega Man, Super Mario Bros. 3, and Capcom’s DuckTales, but Shovel Knight has a bit of its own flavor as well. Though it’s not an easy game, it’s also not as difficult as any of those classics (especially the Capcom ones), and manages to be fair in its toughness. There are new abilities to collect throughout the game, though as best as I could tell, none are required to get through the main story. Speaking of which, one thing I really like is that it’s possible to go back to previous levels to grind for additional money to purchase those abilities and other upgrades. Jake Kaufman and Manami Matsumae’s soundtrack is delightful and catchy, but the story less so, consisting of a cloying plot involving an imprisoned knight (female, of course), whom the title character sets off to rescue. 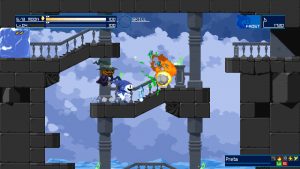 The DS dungeon crawler Shin Megami Tensei: Strange Journey is one of the better MegaTen spinoffs out there, and as it happens, a 3DS rerelease has recently come out in Japan. To promote this new version, Atlus published Synchronicity Prologue, a free metroidvania for Windows PCs set in Strange Journey‘s universe starring series mascot Jack Frost (luckily for us English-speakers, a fan translation patch for the dialogue soon followed). For a piece of promotional material, this game wound up being very, very good.

Like Strange Journey, Synchronicity Prologue takes place in Antarctica and deals with an anomaly there. As Jack Frost, the player teams up with Jack O’Lantern (aka Pyro Jack) to track down an antagonistic Black Frost. There’s a handful of familiar demons and callbacks to Strange Journey, and the story is fairly basic though a little confusing at times. The areas are huge and sprawling, filled with the usual metroidvania-style barriers to encourage later backtracking to get at various hidden upgrades, and the boss battles each have their own unique flavor. If you’re a fellow MegaTen fan, especially one who’s played Strange Journey, you’ll get a kick out of Synchronicity Prologue. However, be sure to download it soon; it’s only available until December 24th. 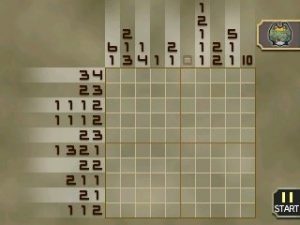 This is the other promotional game I played recently, though this time, it wasn’t exactly free. It cost me 1000 Platinum Points over at My Nintendo. As a Picross fan, it naturally caught my attention, so I saved those points and picked it up.

For those of you unfamiliar with Picross, it’s an excellent puzzle game series by Jupiter and Nintendo where you use number hints to fill in squares on a grid to create a picture. It has a bit of a learning curve, but each game in the series tends to come with a good tutorial and starts players off slowly with small puzzles before ramping up to the larger, more complex ones. This particular Picross release is themed around Twilight Princess, so the puzzles’ images include tools, characters, and locales from said game. It’s a relatively short entry at forty-five puzzles, but for a piece of promo material, it’s a got pretty decent amount of content.

I normally love the games in this series, and this one is very good as well, though I do have two gripes. First off, the tutorial is mandatory; you can’t even see the main puzzle menus until it’s completed. Secondly, the Mega Picross puzzles are the same images from the regular Picross mode, just presented in a different order and with more complex rules. While I’d normally be fine with this, these modes are presented in such a way as to suggest that they’re two completely separate sets of puzzles. With these issues taken into account, this is merely an okay Picross release. 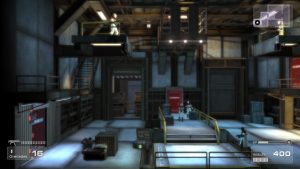 And here’s our second metroidvania for this installment. I haven’t looked up how this version is “remastered”, but at any rate, it’s a multi-platform rerelease of the 2009 Xbox Live Arcade hit Shadow Complex, which I remember being sort of a big deal back then. It combines the 3D sci-fi/military aesthetic of your average big-budget Western title with a genre that doesn’t normally see games in this style. Once again, the story is simple, but is somewhat amusing in its extremes: a guy goes exploring a cave with a girl he just met and reluctantly gets caught up in trying to stop a conspiracy to take over the United States. In the meantime, he comes across various weapons, special equipment, and upgrades to help him explore a gigantic underground base.

One of the abilities he gets, a dashing move which enables him to crash through certain objects, is rather tricky to use, and largely because of that, I ended up passing on a handful of upgrades because I wasn’t really sure how to get to them with said move. However, the others are fairly straightforward, and include things like double-jumping and infinite underwater breathing. There’s also the matter of the map, which could use a little bit more information in regards to marking inaccessible areas for later backtracking; many areas get noted, but not all of them. The final battle is gimmicky and too easy on Normal difficulty, but otherwise, the combat is fairly satisfying. Despite these problems, this is a reasonably polished, though imperfect, action-adventure game. 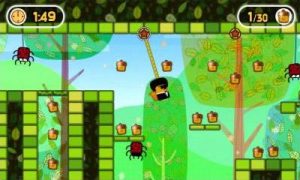 Finally, here’s something else I picked up as a My Nintendo reward. As of this writing, it is still available for the low, low price of 60 Gold Points (and unlike the Zelda Picross game, it can also be found on the eShop). I had never heard of the game before Nintendo started this promotion, but it sounded like the sort of thing I would like, so I decided to go for it.

The basic plot is that a papa squirrel sets out to get back the acorns that were stolen from his family’s stash. He does this by collecting all the acorns strewn across seasonally-themed levels before the timer runs out, avoiding obstacles like bats, bugs, and water. He starts off with a basic run and jump, and later gains a rope to swing from specially designated points; there are also timed power-ups, for higher jumps and other effects, in various levels. Each season wraps up with a level where baby squirrels have to be collected in addition to acorns, and every one of the game’s three “years” has a boss battle at the end, which is actually more of a boss race. Additional goals are included in every level for completionists, and there are unlockable costume options and achievements as well.

Though it reminds me of games like Toki Tori, it is less puzzle-oriented, with the main problem in each level being how to find the fastest, most efficient route. It should also be noted that the platforming physics run on the slidier side, with the rope-swinging in particular taking an extra bit of getting used to. Aesthetically, it recalls a second-tier mobile game from the Angry Birds school of visual design. Not a bad little game, but not noteworthy, either.