There were two unusual things I noticed about Persona 5 during the first hour or so of playing.

The first was that it started a little ways into the future, with a botched heist at a casino. The protagonist, who the player names when the police force him to sign a confession, is told that he was ratted out by one of his teammates and is later interrogated by a hard-nosed prosecutor while under the influence of a truth serum. It is this conversation which becomes the game proper, starting in early April of “20XX”. While betrayal isn’t unheard of in this series, it was a little jarring to be told straight off that one of my future party members isn’t to be trusted, and it led me to spending a bit of time winnowing down my personal list of suspects. Certain other aspects of the story proved to be predictable as well, though for different reasons; it wasn’t until some time after the tale caught up with “the present” of the interrogation that the game’s biggest surprises came to light. 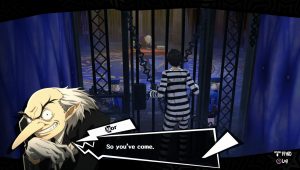 The second was the Velvet Room, the metaphysical place “between dream and reality” where series protagonists craft new Personas from old ones. In Persona 3, the Velvet Room was a spacious, elegant elevator, constantly climbing upward. In Persona 4, it was the back seat of a stretch limousine, which drove forward on an etherial road. On the other hand, Persona 5‘s Velvet Room is static, a circular prison occupied by overseer Igor and this installment’s blue-clad attendants, the twin wardens Justine and Caroline. Igor doubled-down on the metaphysical metaphors by noting the protagonist’s mental imprisonment, and implying that he could be freed through “rehabilitation”. I found this situation—the Velvet Room’s traditional motion replaced by stasis—to be unusual at first, but it ended up feeling appropriate.

This rehab takes the form of fighting Shadows—manifestations of human personality and cognition—in a parallel world. This time around, it is called the Metaverse, which is filled with “Palaces” and is accessible to a chosen few via a mysterious smartphone app. Most of the Palaces are ruled over by a Shadow whose real-world counterpart has desires distorted enough to negatively affect the people around them, often in abusive ways. The protagonist and his fellow Phantom Thieves change not just their outfits while in the Metaverse (a nice touch that, for one, avoids the awkwardness of characters wearing winter school uniforms during summer vacation while exploring dungeons, as in the previous two games). They also change things for the better by stealing special Treasures—symbolic items representing hearts—from these Palaces, which collapse as a result and permanently alter their owners’ perceptions in the real world.

There’s much more to the rules and such governing the Metaverse, but those are the basics. The plot is dense, especially early on when the protagonist and schoolmate Ryuji meet Morgana, an amnesiac who is nevertheless intimately familiar with the Metaverse, for the first time. Morgana is this installment’s requisite Pinocchio figure; like Aigis and Teddie before him, he has a somewhat mysterious past and a deep-seated yearning for humanity. However, even though he’s a fun and interesting character, he is also the most unlikeable of the three. Perhaps because he takes the form of a cat, Morgana is a conceited, and sometimes childish, jerk at times. 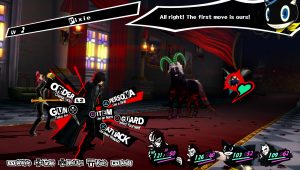 The rest of the Phantom Thieves crew is made up of a bunch of outcasts, which includes the protagonist. All formerly conformist misfits who don’t quite fit in because of who they are, and victims of selfish, powerful adults, the Phantom Thieves earn their Personas by embracing rebellion, which fit this theme through their appearances as inspired by fictional outlaws (Arsene [based on Arsene Lupin], Zorro) and larger-than-life historical figures (Captain Kidd, Johanna [based on Pope Joan]). The implementation of this theme, as well as the inconsistent seven deadly sins one which is prevalent throughout the game, is kind of goofy, but I mostly got used to it. Like its predecessor, Persona 5 has a lot to say about the role of the media in society and how the seemingly innocuous, everyday views of the general public can further shape which direction it takes. However, it is a much darker tale, with highly-motivated villains and several instances of Very Bad Things, some potentially triggering, happening to the main cast and/or their associates. There’s also the usual range of MegaTen demons for the protagonist, who bears the “wild card”, to collect and use. This time around, Shin Megami Tensei’s oft-dreaded demon conversation system is how one obtains new Personas. I had mixed feelings about this design choice going in, but certain abilities that can be obtained throughout the game ended up making this process a bit less painful than it has generally been in the past.

Speaking of those abilities, I got them and others by nurturing relationships with Confidants, Persona 5‘s version of Social Links. Each Confidant has a distinct set of abilities that can be obtained, along with the usual Persona Fusion stat bonuses and unlocks, depending on who they are. For example, spending time with a politician named Yoshida leads to special conversational abilities which make negotiating with Shadows easier and/or more profitable. Even some social stats, like Kindness and Proficiency, can be improved through certain interactions, which is a welcome addition. There’s a more unusual and diverse range of Confidants in this installment, including shopkeepers and even residents of the Velvet Room. However, there is also a certain Confidant whose story can’t be advanced until after a certain point in the main tale—and the game doesn’t warn you about this. Aside from this problematic design flaw, plus a certain basic sameness between many Confidants that becomes apparent as the game wears on, the overall relationship system is as polished as it has ever been in a Persona game.

The other core component of Persona 5 is, of course, the dungeon-crawling and Shadow-battling. The Palaces where the Phantom Thieves do their work are wonderfully designed—easily amongst the best levels Atlus has ever made, in any of their RPGs. While there are some repetitive elements—particularly in the randomly-generated “Palace of the Public” Mementos—there are also many unique spaces, both large and small, and a wide range of thematic differences between each dungeon. The battling is the same reliable system from Persona 4, complete with All-Out Attacks, but there are a few new tweaks, among my favorites being Bless and Curse spells that don’t instantly kill and are almost always guaranteed to work. Different this time around is an overwhelming number of types of items, particularly for healing HP, and many of which will go unused.

That leads me to the main menu, which any player will undoubtedly spend a lot of time in. Like much of the rest of the game’s trimmings, the menus are in stark black, white, and red, with manga-esque character art and typography inspired by cut-and-paste ransom notes. They are gorgeous to look at, with slick little animations between the main menu and its subsections, and neatly organized, too. There’s also a separate (and just as stylized) menu for text messages, which the protagonist receives on an daily basis and are helpful for both plot-related reasons and for keeping up with Confidants; a robust fast-travel system; and the ability to save just about anywhere while out and about in everyday life.

As for the previously-mentioned amount of items, a large part of that is thanks to a crafting system to make tools such as lockpicks, as well as another one to duplicate cards which can be used to teach skills to Personas. There’s also treasure items which can be sold for cash, key items such as Palace maps, books, gifts, and as mentioned before, a lot of HP healers. Many of the HP, SP, and status effect curatives can be bought at a variety of shops, including a supermarket, a pharmacy, a discount store, a convenience store, a train station kiosk, and several vending machines, and some are only available for a limited time. 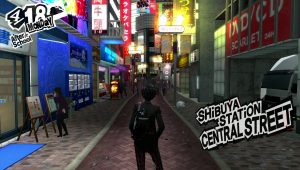 If this sounds overwhelming, it is (and you will want to ignore the vast majority of those items), but it is also reflective of its setting: Tokyo, including the real-life districts of Aoyama-Ichome, Shibuya, and many others which become available later on. Persona 5 is overwhelming in both its shopping choices and activities for beefing up social stats, but this is because Tokyo is overwhelming. Notably, some of the shops present in the game are parodies of real-life chains such as Don Quijote, 7-Eleven, and Tsutaya, while the odd bits of actual product placement by the likes of HMV and Calbee blend into the setting fairly well. In these aspects, Persona 5 has captured the consumerist chaos of the Tokyo metro area perfectly, and feels even truer to life than it would have otherwise.

All this is presented with crisp and colorful graphics which straddle the lines between painterly, typical of a modern-day “anime” game, and the MegaTen series’ traditional flat style. As mentioned before, the dungeons have been handled with care, and the same is true of the named characters, Shadows, and Personas. Some character models, like the sparkly and snowy Jack Frost, even have an extra bit of textural oomph to them. Design-wise it’s excellent, with the notable exception of Ann; given that her story arc focused on sexual harassment, and her dislike of being put into perverse situations in general, her skin-tight and boob-windowed Phantom Thief outfit is in questionable taste. A few scenes appeared to push my PS3 to its limit, which resulted in some audio hiccups. While I’m on that topic, the voice acting was average—not amazing, but generally not bad, either. This is especially true of the handful of traditionally animated cutscenes, where the dub cast clearly tries to match lip flaps as closely as possible. As for the localized script, it has a handful of corny and awkwardly-written moments, but is otherwise very good.

Finally, I must mention the wonderful, wonderful music. Fellow fans of composer Shoji Meguro will recognize his signature style all over the soundtrack, especially his love of electric organ and sometimes distracting English-language vocals. However, the soundtrack is particularly lovely in that it captures some of the essence of Shibuya-kei, the diverse musical movement which originated in the real-life version of one of Persona 5‘s most important locations. I already own the soundtrack and it’s currently living with my other game music, but perhaps I should place it next to my Pizzicato 5 and Fantastic Plastic Machine albums instead.

The long wait for this game’s release has been worth it. Despite its flaws—including others I’ve not mentioned here, such as Atlus’ continued use of gross gay stereotypes; more to do with less time, thanks to frequent story events; and a certain rushed-feeling story arc and new character introduction—Persona 5 makes for an outstanding addition to any JRPG fan’s library. It has a darker story than its predecessors, a fascinating and well-realized cast of characters, and the most stylish visual and aural trappings you’ll see and hear in any game this year. If you somehow haven’t played this yet, it is not to be missed.

Special Stage: Back in May, Anime News Network posted an interesting feature article titled “The Real Japan Behind Persona 5” which discusses the likely inspirations behind certain story events. Note that it contains spoilers for the whole game, and especially the first and fifth major story arcs.