I beat Frog Fractions 2 this afternoon (or is that Frog Fractions 3?), a game that’s much longer, more incoherent, and harder than its predecessor. It’s also the first game I’ve Kickstarted which has since come out, which is funny since it’s the only one whose release was obfuscated on purpose, rather than openly falling into some form of Development Hell. There is one part I must spoil, since it involves hardware: at some point, there’s a section which, out of the blue, requires a microphone or similar audio input. However, this section is optional, but the game doesn’t tell you that it is. I don’t use a microphone when PC gaming, and anyway, my offbeat setup makes hooking one up uniquely frustrating. Also, there were no alternative control schemes offered within the game for this part. To me, this particular section wasn’t very well thought out, but Frog Fractions 2 is, in many ways, not a friendly or approachable game. Though it is never unfair (aside from the microphone thing), it does demand a decent amount of imagination and cleverness from its players.

Finding it within Glittermitten Grove is easy enough—I just used the same basic approach as one does with Frog Fractions—but once I got there, what confronted me was a place which got more and more difficult to deal with the further I dove in. Without giving away too much, Frog Fractions 2 is full of funny and weird moments, but in other aspects, it’s a different beast. 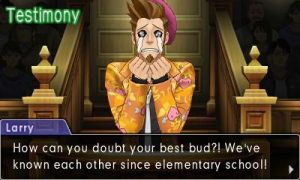 On another end of the humor spectrum, I went through all three of the playable Phoenix Wright Ace Attorney: Spirit of Justice DLC episodes. The first, a full-length case titled “Turnabout Time Traveler”, was not nearly as good as its equivalent from the previous game. Instead of an orca at a musically-inclined aquarium, the client is a bride who claims to have relived her wedding reception thanks to a time machine. Oh, and of course, there’s been a murder, and she’s the main suspect. A few of the arguments made in court are sloppy and poorly worded in a way that typically happens in the worst Ace Attorney cases. On the other hand, a major highlight of this episode is the return of Larry Butz, a regular from the first Ace Attorney trilogy who has a tendency for getting into trouble. Phoenix, Maya, and Edgeworth are all present as well; just add Gumshoe and this would’ve been a full-on nostalgic reunion. However, perhaps it is for the best that Gummy didn’t appear, as I would’ve preferred a better case to accompany all the fanservice.

The other two DLCs, brief alternate universe stories called “Phoenix Wright: Asinine Attorney” and “Apollo Justice: Asinine Attorney”, are much fluffier trifles. Phoenix’s tale centers around Pearl and her visit to Kuhra’in, and on the flip-side, Apollo’s features that kingdom’s Princess Rayfa visiting the United States. They are both very short and lighthearted, with Apollo’s episode being both slightly longer and generally better. Both also come with pixel-art 3DS themes, adding some more value to what would otherwise be a pair of overpriced tales.

Before playing through all of that, however, I beat a couple of much longer games. First was Picross 3D Round 2, which is sort of misleading since, after the credits rolled, many more new puzzles unlocked. Round 2 is just as good as the original Picross 3D, which is to say that it’s one of the best picture puzzle video games one could ask for. The puzzles are plentiful and brilliantly conceived, and although there’s an additional level of complexity now, with specially shaped pieces, the game does a great job of easing you into things, as expected from this series.

The other game was Dragon Quest Heroes: The World Tree’s Woe and the Blight Below, a crossover between Dragon Quest, a JRPG series with a solid reputation, and Dynasty Warriors, which is looked upon… a bit less fondly. Although the basic flavor of the latter is definitely present—in the forms of simple combat controls and massive swarms of enemies—this is also very much a Dragon Quest game in terms of aesthetics, polish, and, on the more negative side, some old-school JRPG menu clunkiness. Still, it was great fun carving through dozens of slimes and the like alongside Alena, Yangus, and other beloved characters from mainline Dragon Quest games, and it’s not like I mind a bit of mostly simple hacky-slashy fun every now and again.

I also replayed the first Frog Fractions (it’s always a good time on Bug Mars) and continued on with Pokemon Sun, which, if anything, recalls the tedium of Pokemon Platinum. However, I hope that unlike with Platinum, I don’t end up taking nine months to beat it. Right now, I would guess that if I’m not at the halfway mark, then I’m very close to it. Also, this isn’t exactly a video game, but a few days ago, I dug out my old Tamagochi and started messing around with it, an experience I may or may not write more about later. The most amazing thing about it so far is that the batteries, which I believe are the original ones from the late 1990s, still work.

As for what I’ll start next, I’m really not sure right now. With Persona 5‘s release date coming up, I’ve been eyeing the two Persona spinoffs I have left in my backlog, Persona 4 Arena Ultimax and Persona Q: Shadow of the Labyrinth. There’s also my dwindling pile of Xbox 360 games, Tales of Vesperia arguably being the longest amongst them. However, for the time being, I might be best off plugging away at Pokemon Sun, since I’ve been neglecting it lately. We’ll see how it goes.