There’s a series of Japanese figures called Pinky:st that I’ve been a collector of for a number of years now. These days, they aren’t nearly as popular as they used to be, but since I still have some interest in them, their dip in popularity simply means that I can get some of the previously expensive ones at much lower prices. As it happens, two of these figures were Pucchi and the second release of Evil, which were included in the limited-edition box sets for their respective DS games. Although my main interest was in the figures, I felt an obligation to play the games as well, and so I did.

These two were the rhythm game Pinky:st Kira Kira * Music Hour and its sequel Pinky:st Kira Kira * Music Night (there is a third Pinky:st game, a PS2 RPG titled Mahoraba Stories, but I neither own nor have played it). Music Hour follows Pucchi on her quest to become a great dancer and fashionista; Music Night stars Pucchi’s rival Evil in a similar story. Strictly on a gameplay level, both are reasonably import-friendly, with a handful of icons and English words in menus and the like. For those who can read Japanese, the text is entirely in hiragana and katakana, so one doesn’t have to worry about any complex or unfamiliar kanji. In addition, the first game was localized in Europe as Kira Kira Pop Princess, so one can forego the Japanese version entirely if they want to. I can’t find any evidence of Music Night‘s European version, Pop Town, actually seeing release anywhere besides Italy, and have to wonder if the German WWII military uniforms that a couple of the characters briefly cosplay in at one point had anything to do with it. 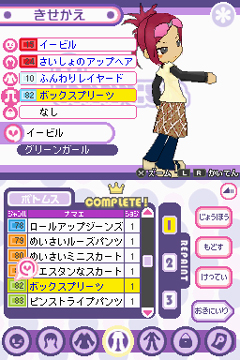 Not being well-versed in Japanese, I couldn’t read the dialogue bits in the cutscenes (although, after beating Music Hour, I was able to find fan translations of the script). There are a lot of cutscenes, too. In addition to the handful of cutscenes related to the core story, there’s one before and after each dance battle round. I must’ve spent just as much—or more—time looking at cutscenes than I had actually playing the games.

Cutscenes aside, here’s how the games are structured. The main character’s home base is at ANGELA, a club on George Hill. Here, Pucchi (or Evil) can practice dance routines for the songs unlocked to that point, save, connect to other players wirelessly, or access the wardrobe. This last part reflects Pinky:st’s core appeal: the mixing and matching of dozens of tops, bottoms, hairstyles, accessories, and so on. The sheer number of clothing articles is astonishing, and not only includes styles from the Pinky:st figure line, but also completely original ones. On top of that, each item has a total of three color variations, and up to ten complete outfits can be created and saved for easy access.

There are other neighborhoods in Rainbow Town besides George Hill. Each one has a ludicrously overpriced clothing store, an accessory-dispensing gashapon (capsule) machine, a place to take photos of the main character with a rudimentary camera feature, and a venue where the dance battles occur, devoted to a specific musical genre. Who participates in these battles and the number of songs for each genre varies between the two games, but the actual dance battle gameplay is the same. For these segments, the DS has to be held book-style, and the touchscreen is used to tap, swipe, and scratch the cues that pop up within three rectangular fields. It’s a simple enough system, but it breaks from the conventional wisdom of rhythm game design in some peculiar ways.

There are typically two schools of design when it comes to rhythm games: the “Simon Says” approach and the “scrolling cues” one. In a Simon Says rhythm game, such as Parappa the Rapper or Space Channel 5, the actions to be taken are played first by the game, and then the player repeats the same sequence. Those that use scrolling cues, including the Dance Dance Revolution and Rock Band games, offer a preview of the beats to hit as they scroll toward the goal. The Music Hour/Music Night approach lies somewhere in between. In these two games, cues for where the notes will appear briefly pop up in a small box at the top of the touchscreen, though these cues rarely indicate what type of action will be required (the aforementioned tapping, swiping, and scratching). This preview box also does not tie in to the rest of the playfield in any way, and in fact can distract from it. 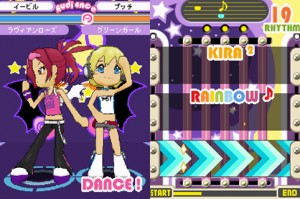 The dance segments have some other unique features. How the notes of each music track sound depends on how precisely they are played, which can result in some rather clunky sounding melodies. While an interesting approach, it can make it harder to determine how a track is supposed to sound. Other than pulling off a completely perfect performance, there is a way to hear tracks played properly, but it requires hoofing it back to ANGELA and going through the practice menu, without actually activating a practice. Then there’s the dancing itself: not only is it difficult to watch the Pinky characters dance on the opposite screen while playing (note that a replay button does become available at the end if you want to watch the simple dance animations), but there are also two measurements of how well a performance goes—and only one of them determines if you pass or fail. As in DDR, a grade is given at the end for how well the notes were hit, chains, and so on. However, there is also the “audience” meter, reminiscent of a similar feature in the PS1 dance battle game Bust a Groove, which shows how well your character fares against the Pinky NPC they’re up against. This second metric is the one that ultimately determines success, and because of that, it’s entirely possible to get a great grade on certain songs and fail. To call such a setup contradictory and maddening is an understatement; the game’s designers should’ve gone with either the grade system or the audience meter, not both.

Once a dance battle has been won, a small amount of money and a prize is issued—usually a new wardrobe item, or said item plus a P-Coin for use with the gashapon machines (for losing battles, only the money and sometimes a P-Coin is given). Speaking of money, as I said before, the clothing stores are overpriced. One has to do a lot of dance battles to build up enough capital to afford even the cheapest items, and even selling off unwanted goods doesn’t help, as only a very small amount is offered for them. That said, the best way to build up a decent wardrobe is simply to win the dance battles.

Finally, this wouldn’t be much of a rhythm game review if I didn’t talk about the music itself. Although the graphics are mostly lovely, with bright colors and clear, crisp designs, the music is, unfortunately, not as memorable. It’s actually fairly generic, and the only tracks that I found stuck in my head were the ones that I had trouble with in the game, and had thus played a dozen times over in hopes of getting past.

As licensed games from a small, and now-defunct, developer, I wasn’t expecting much. That said, these two were pretty much what I was expecting: mediocre, brief, and laden with Pinky:st fanservice. The Pinky figures themselves are all right as well, though the pegs on Evil’s front hair piece and base are too large (either that or the holes are too small). Evil also doesn’t come with as many extras as Pucchi, but like too few other figures in the line, has a ball-jointed neck. Nevertheless, both girls are now on display in my figure case, and their respective games have been filed away in my library, two more for the “beaten” pile.