Shadow of the Colossus annoyed me. It was a very atmospheric game, the control scheme was inventive, and the animation was satisfyingly realistic, but there was one thing about it that broke the immersion for me: the hints given to you by the game’s god-like being, Dormin, if you happen to take awhile figuring something out. There was no way to turn them off, at least in the first playthrough (I tried), which made the whole situation worse, especially since SotC‘s excellent predecessor, ICO, didn’t drop hints at all. If there’s one thing that irks me, it’s a game that doesn’t trust its player.

Recently, though, I’ve thought about it some more and came up with a story-related explanation for these unwanted hints: the protagonist character, Wander, is a fucking moron.

The story is a simple one: girl is sacrificed, boy wants to resurrect girl, boy makes a deal with a deity to have it done. This is all the information we get at the beginning of the game, and your time spent through most of the rest of it is in carrying out the task the deity has outlined, namely killing sixteen giant beings scattered across the land. Thus, from the beginning, we know that Wander is determined and focused, but there’s also a strong hint of selfishness in there. (It’s worth noting here that we don’t know the nature of the relationship between him and the dead girl, Mono, though it’s often theorized that they were lovers.) In any case, Wander seems not to trust the people who sacrificed the cursed Mono, and it’s pretty clear that he alone wants to bring her back to life. 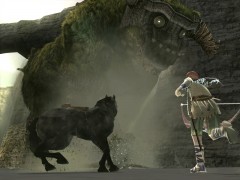 The fool takes on a poor giant, while the Most Awesome Horse in Video Games looks on.

So anyway, after accepting the task and dismissing Dormin’s warning that he may pay a “heavy price” at the end, Wander sets off on the back of the best character in the game, the loyal steed Agro, in search of colossi to kill. The first colossus is basically a tutorial for the controls, which I didn’t mind at all considering the offbeat nature of them. However, for every colossus, Dormin will not only provide a vague hint at the beginning as to its location (again, I don’t mind this, as it feels like the opening of a new chapter), but take too long once you find one and s/he will drop a hint or two.

Like I said at the beginning, this annoyed me to no end. This is because SotC is, at its heart, an environmental puzzle game. This is a genre where, in the best games, hints tend to be nonexistent (such as in the aforementioned ICO), or, if they are given, are presented within the context with the story (Portal is a great example of this). If Dormin’s hints are to be taken as the latter, then it reveals an impatient personality. This makes even more sense when you consider that at the end, it’s revealed that Dormin had motives of his/her own, and on top of that, is an evil being (of course). It turned out that the colossi were seals locking Dormin away, and that the entire land is a forbidden one.

So if Dormin is impatient—so impatient that, after waiting all this time for a person to come by with the sacred sword to do his/her bidding, he drips out hints on how to destroy the seals containing him—what does this say about Wander, the recipient of the hints? Does he ever stop and think, “Why is this deity helping me along? Isn’t this a test of strength to see if I’m worthy enough to have this person I care about brought back to life?”

The answer is no, no he doesn’t. This is by design, of course, as Wander can’t leave this land, but that’s not what the player is supposed to attempt, either. There’s no story event where Wander goes, “Fuck it,” collects the corpse he came with, and rides Agro toward the exit, only to find that he is Dormin’s prisoner. That would be great if there was. Instead, the player is expected to do Dormin’s bidding, obediently. Wander is not only determined and selfish, but way, way too trusting. In my opinion, when he became the vessel for Dormin’s earthly form, only to be defeated and turn into a horned baby, he got what he deserved.

I don’t know about anyone else, but I don’t like playing idiots in games. Amnesiacs, sullen teenagers who don’t give a shit, cheerful children, would-be megalomaniacs—they’re all fine with me, as long as they have their wits about them and a good grounding in common sense. Vaan from Final Fantasy XII is one of the worst protagonists in the series due to his naïvete, but Wander takes the cake in sheer foolishness, especially since the former is only clueless during cutscenes. Some might look at Wander’s actions as romantic, and I don’t blame them, but if so, it’s a youthful romanticism taken to careless extremes.

So, do I deduct points from the otherwise outstanding Shadow of the Colossus due to the hints, or because Wander is stupid? A bit of both, but still largely the former. I’m not saying all game protagonists have to be smart, or at least sensible, but I don’t ever want to have my own intelligence insulted in the process, especially in a genre where the whole point of it is to figure things out.

There should be no place for idiots to succeed in puzzle games; it’s possible Dormin knew this, and sensed Wander’s lack of wits the moment the young man strode into his/her domain. For Dormin, Wander was the perfect patsy, but a fatally flawed one. Wander left an obvious trail behind him during his escape to Dormin’s forbidden land, leading to the latter’s defeat shortly after s/he obtained his/her goal. Perhaps in the end, the both of them, Dormin and Wander, were fools.