The Final Word on Okami 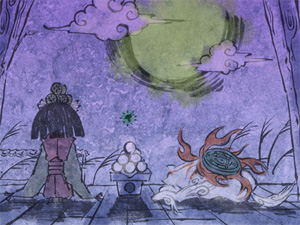 I beat Okami late Monday morning. I failed to write down the total completion time when the final stats were tallied, but by taking the timestamp from my New Game Plus file and adding on whatever time passed between that and my previous save file, I was able to come up with a good estimate: 50:10:43. Those fifty hours ten minutes and change took me over six months to compile, and my fellow okamibloggers have pretty much given up on the game (I know this is the case with namatamiku; not sure about CloudANDTidus). Despite its pretty graphics and atypical setting, there was something about Okami that seemed not to click with us, and it’s not the type of thing that can’t be explained either.

One major problem with Okami is how the story is paced. Certain events happen in such a way as to lead one to assume that the game is really and truly ending, but instead it keeps going, and in shorter, less satisfactory chunks; that these latter chunks differ from the main initial one in certain significant ways also feels problematic. It’s as if the whole of Okami is one tangent-riddled, dialogue-heavy game squashed together with its slightly more focused, but also even more haphazardly-paced, sequel. In the game’s second half, certain things are revisited for reasons that make very little sense in the grand scheme of the story, and are more tedious to deal with on top of that. The game doesn’t start to feel coherent again until the final few hours (which also includes one of the single best dungeons, in a game with several decent ones already), and even then, some bits of story come out of nowhere for the vaguest of reasons.

While the pacing is off, this isn’t helped by the fact that Okami can’t settle on an overall tone. While some characters and quests are quite entertaining and well thought out (Issun, the Sasa Sanctuary sequence, and certain canines come to mind), others waffle between the lighthearted and the serious, and some of these changes aren’t entirely convincing. I think part of this lies at fault with the game’s borderline whimsical audio-visual style, and I don’t mean the traditional Japanese elements, either. The characters’ broad animations, particularly the squashing and stretching of the heads used in lieu of lipsynch (as the human characters lack visible mouths), serve the story well in lighter moments, but when it comes to the heavier ones, they’re a detriment.

Let’s move on to the gameplay, which is pretty much the main reason why I play games to begin with. While I enjoyed certain quests, sidequests, boss battles, and what have you a good deal, this was a little disappointing too. Perhaps the biggest letdown of them all was how easy it was in certain respects, and how difficult it could be in others, especially in getting certain brush techniques to work the first time. Getting all the money you could ever need was a fairly simple affair, as was finding items for use in battle without having to buy them, and even then, I wasn’t compelled to use handy items like Exorcism Slips, Steel Soul Sake, and Inkfinity Stones in battle until the second half. Even the health-regenerating Holy Bones saw rather limited use during the first twenty hours or so. In my final stat wrapup for Okami, I found that I had ended up clearing the entire game without losing a single life.

All in all, Okami was okay. Not amazing, not fantastic, and definitely not engrossing or compelling, just okay. The graphics are beautiful, as is the music, and the setting is a refreshing break from those you tend to see in other action/adventure games, but it also contains an oddly-paced, tangent-filled story in an already sidequest-heavy world. A bit more polish and tightening up of the narrative structure, a slightly less forgiving overall difficulty, and a more subdued character animation style to make the serious bits feel more serious while keeping the whimsical ones whimsical would’ve gone a long way to making this okay game into one that is truly great.