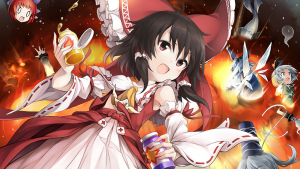 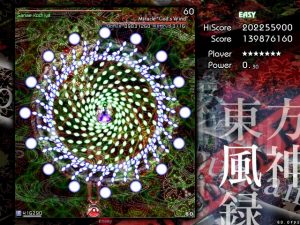 Mountain of Faith turned out to be very good indeed, with some frustrating, brilliant, and frustratingly brilliant bullet patterns. Mid-boss Momiji’s were some of my favorites, despite being easy to dodge, with curling loops of circles swirling outward against a waterfall backdrop, almost in time to the music. Sanae’s transforming stars and other elegantly-designed danmaku surprised me so much the first time I saw them that I lost my focus—and some lives. Mountain of Faith is often held up by Touhou fans as a good place for series newcomers to start, and even though Imperishable Night is somewhat easier, I see their point. There are a lot fewer playable characters—and therefore, playstyles—to have to worry about, and the bombing system is both flexible and generous. Like Imperishable Night, it is available on Steam, and fan translation patches exist.

Anyway, back to Touhou Genso Wanderer Reloaded, which is a far longer and meatier Mystery Dungeon clone than a fangame has any right to be. The main story, which centers around a male(!) character’s store transforming into an imposing tower thanks to a strange sphere, can be cleared in about four hours. What led me to spending 90+ hours on the game was everything that came afterward. Once the credits roll and heroine Reimu and her partner Futo return home to Hakurei Shrine, additional stories become available. Some of these star other characters and are accessed by talking to them or visiting their homes, while others require some light exploring to find, or unlock after clearing certain objectives. I must’ve gone through at least two dozen sidestory dungeons, and by the time I finally set down the game earlier this week, there were still a handful I hadn’t cleared, much less tackled at all. 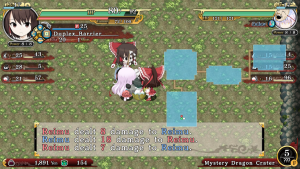 Every dungeon is filled with superdeformed Touhou characters to defeat, in differently colored and sized variants depending on the floor and/or difficulty level. Each enemy has their own particular quirk or gimmick, much like in Mystery Dungeon: Shiren the Wanderer, and they’re typically assigned to suitable characters in the Touhou canon. For example, like the Evil Soldiers in Shiren, the half-phantom gardener-slash-swordswoman Youmu Konpaku leaves behind a spirit after being defeated, which can level up another enemy if it’s not destroyed in time. As with the enemies, the gameplay and interface borrow heavily from the Mystery Dungeon tradition, with a map overlay, hunger meter, status effects, traps, special containers to surpass the inventory limit, and other such mainstays present. 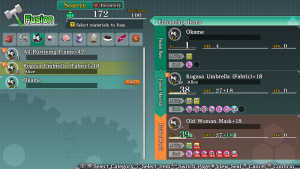 A signature highlight of the game is a robust crafting system called Nito Fusion, for which new features can be gradually unlocked the deeper one gets into the game. Even outside of this system, weapons and armor will often change in both name and appearance as they level up, and the overall amount of equipment, consumables, crafting items, and so forth is enormous. Depending on who you’re playing as and when, all of these items can be carried over between dungeons, unlike character levels and, in the case of failed runs, money. Although there could be a little more variety in the randomly generated dungeon layouts, this is absolutely not a problem when it comes to sidequests, enemies, items, crafting recipes, unlockable playable and partner characters, and so forth. In terms of crafting, customization, and, of course, dungeon crawling, there is so much to do and see here that it’s hard to get bored. Outside of battle, the visual novel-style cutscenes can be rewatched in a special menu at Hakurei Shrine, which also features sections for special attack illustrations (but not those for the dungeon clear artwork, sadly), dungeon records, and achievements.

As an aside, you may notice that I haven’t said much about the story aside from a broad outline of the initial plot, but it’s arguably the least important part of the game. One’s enjoyment of the story largely depends on one’s familiarity with the Touhou universe (including, I suspect, the previous two games in the Fushigi no Gensokyo series), and also one’s tolerance for pleasant but insubstantial banter. The graphics range from lovely to—in the case of certain dungeon tilesets—garish, and the soundtrack is pleasant enough.

After a long break to start Rune Factory 5, I recently picked up Genso Wanderer again and played through enough additional dungeons where I can now say I’m satisfied and ready to put the game down. To be honest, I hit a point where the few major sidestory dungeons I had left were all on the hardest difficulty, Lunatic, and would require quite a bit more grinding than I wanted to do. Even so, it says something about a game when I was willing to invest dozens of hours in postgame activities, given that I barely touch postgames at all. If you love Mystery Dungeon-style roguelikes as much as I do, you absolutely must pick this one up; doubly so if you’re a Touhou fan, or merely Touhou-curious.