I don’t replay games as often as I used to, in part because my backlog of fresh, new-to-me titles has grown so large. The last time I did was in August 2020, when I played through the version of Pinky:st Kira Kira * Music Hour released in Europe, titled Kira Kira Pop Princess. Still, ports and reissues of games I’ve played before enter my collection from time to time, causing me to file mental notes to someday replay the likes of Phantom Brave, Halo: Reach, and Final Fantasy IX. 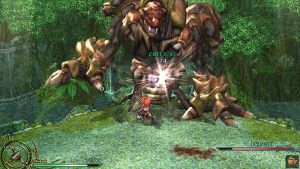 Given that one of my projects this year has been to whittle down the Ys wing of my backlog, on this year’s agenda was Ys VI: The Ark of Napishtim. The PS2 port of Ys VI was one of the games I wrote about during the very first year this blog was in operation, and I was curious to see how it had held up. This time, I played the PC version, which, aside from the addition of save point warping and some other tweaks, is more or less the same game that Falcom originally released for that platform back in 2003. What this means is that the PS2’s 3D character models are gone in favor of the original sprites, and there’s neither ugly CG FMVs nor substandard voice acting (or any voice acting, for that matter). What few out-of-engine cutscenes exist are done in a 2D style reminiscent of those in other Ys games from that time. Despite some jaggies and blurriness on the 2D art assets—artifacts of this game’s age, if nothing else—this PC version is probably the optimal way to play Ys VI in the year 2022.

As for the game itself, it turned out that my thirteen year-old review was still largely on-point, though I found myself having less patience for the amount of backtracking and grinding I had to do, to say nothing of the ridiculousness of the dash jump controls. The dash jump is a special move that can be used to traverse distances that are a bit too far for a regular jump. To pull one off requires doing a dash attack, which is not an easy thing to do in the first place, while jumping. Given that this was a replay where I didn’t feel like going for any sort of total completion, I gave up trying to reach certain treasure chests after awhile. I still went around and took on the optional bosses, though, which resulted in gear that helped me out a good deal in the endgame.

In comparison with Memories of Celceta, the Ys game I had played prior to this one, it’s evident that the series has come a long way. Celceta isn’t as grindy, sports better map and dungeon designs, and had a bit more variety in general. It’s also about 33% longer than Ys VI, yet with less of a reliance on backtracking and grinding, doesn’t feel as padded out. However, both games share that exhilarating fast-paced sword-swinging gameplay that is a hallmark of the Ys series. Despite their differences, some of which are rather significant, both games fit comfortably within the Ys canon.

There is at least one other replay I want to do this year, the aforementioned Phantom Brave. On my first playthrough of that isometric strategy RPG, I came away loving everything but the gameplay, which is done in a “tile free” style that I found to be fussy more than anything else. As I (successfully) did with Final Fantasy VIII many years ago, I want to give Phantom Brave another chance; the main question is when. As for Ys, I have all three of the latest numbered entries to play next, starting with Ys Seven. Hopefully I can get through both that and Ys VIII: Lacrimosa of Dana before the end of the year. I won’t be done with Adol Christin for awhile yet.