Until this past Sunday, when the credits rolled on Ys: Memories of Celceta, I hadn’t beaten an Ys game since 2013. Even though I love the series, they had been starting to pile up, but so many other games got in the way. A reimagining of Ys IV, Celceta is a fairly standard entry, which is by no means a bad thing. There are a handful of party members to manage, which isn’t typical of many Ys games, along with a sprawling forested overworld, decently-sized dungeons, sidequests, crafting, and more. Weapon reinforcement felt extraneous, especially given the pace at which new gear would be introduced, and a certain dungeon sported some annoying design quirks, but otherwise, this was another engaging adventure with heartthrob explorer Adol Christin. Most importantly, I was able to get through the main story and most of the side stuff in thirty and a half hours. This is two and a half hours more than the average Main+Extra time on HowLongToBeat. I tend to go over these averages by about 10%, so my own beat time was about the length I had expected. 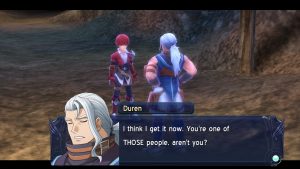 Adol and I have no time to waste!

Length is one area in which Ys games excel. The most recent game in the series, Ys IX: Monstrum Nox, is long by series standards, but even that has an average beat time of 41 hours. Compared to some of the other JRPGs I’ve beaten in recent years, this is positively breezy. Back in January, I finally wrapped up Dragon Quest VII: Fragments of the Forgotten Past with a total logged time of 96:16. Ni no Kuni: Wrath of the White Witch was less of a slog, but still took me just over 72 hours to finish. With some series, such as Pokemon or Disgaea, I come into those games expecting to spend a minimum of fifty hours with them. For mainline Personas, I plan for at least a hundred hours.

As much as I enjoy these series, I do wish that their individual installments were shorter on average, particularly given the size of my backlog. Ys’ stories never feel rushed, have appropriate amounts of tone-setting flavor baked in, and don’t overstay their welcome. Sure, some JRPGs, like the aforementioned Dragon Quest VII, feel bloated in terms of storytelling and lore, but even those with tighter pacing often end up being long. How is it that Ys can pull off a similar experience with less gameplay time?

For starters, Ys-style combat and movement feels snappier than those in other action RPGs, such as the Tales and Kingdom Hearts series. This isn’t unique to action RPGs, either; the turn-based Bravely Default features quick, breezy battles. Ys games also tend to have no more towns than you can count on one hand, which cuts down on NPC chatter. Compare this to Dragon Quest VII, which not only has a ton of towns, but most of these locales change in significant ways depending on the time period you visit them in. There’s also the matter of grinding, which, to be honest, is a non-issue with the main storylines of most JRPGs, but does rear its ugly head every once in awhile. In short, to get a JRPG down to Ys length, a good balance between brevity and design seems to be ideal.

When I looked at some more of last year’s big JRPG releases on HowLongToBeat, it was heartening to see that Monstrum Nox wasn’t alone in terms of reasonable length. Final Fantasy VII Remake‘s Main+Extras time is 42 hours and Disgaea 6‘s is, remarkably, 46.5. Even Tales of Arise has a Main+Extras time that is less than 60 hours, which seems remarkable for a Tales game. Perhaps JRPG developers are finally moving away from the idea, prevalent since at least the PS2 era, that longer equals better. Perhaps they are remembering that the best JRPGs don’t have to be the longest.

I certainly hope so. There are a number of potentially very long JRPGs still sitting in my backlog, some of which are so intimidating in terms of length that I keep putting them off. On the other hand, there’s also more Ys games. The plan is to get through most, if not all, of those Yses by the end of this year, interspersing them with other JRPGs of a reasonable length. As for the longer ones, I’ll continue to chip away at that pile whenever the mood strikes me.