Even though my desktop machine was packed away until a few weeks ago—and the TV until this past weekend—I managed to play through and beat a couple of games on my laptop. The first one beaten was Aviary Attorney, a visual novel strongly inspired by the core Ace Attorney series, with some added twists. The most frustrating of these was that it is much easier to fail during a trial, in one way or another, and that, unlike in Phoenix Wright’s cases, those failures don’t result in a game over, but rather, stick with you on through to the next part of the story. By the halfway point, I was so demoralized by this game that I put it aside for awhile and almost forgot about it entirely. When I did pick it up again, the results of the next case were frustrating enough that I started it over again. It doesn’t help that, due to certain quirks of the game’s design, it’s very easy to overlook things, or be unable to check out specific places before the pre-set time limit is up. In addition, manual saves are broken and have been for awhile, so saving during a day’s investigation or trial is impossible. 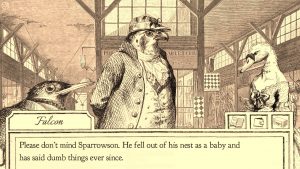 There were some good things about Aviary Attorney. though. The writing was generally decent, with Sparrowson, a comedy relief assistant in the Maya Fey mold, being a highlight. I enjoyed the overall 19th century-inspired aesthetic, which makes ample use of public domain artwork and music. The automatic checkpoints are easily accessible if one wishes to restart from a certain day. I just wish there had been enough time to do my investigations without having to rely on trial and error.

The second laptop game I beat—later that same day, no less—was Plunge, a roguelike with an interesting gimmick and a mostly black-and-white look reminiscent of underground comics. The aforementioned gimmick is the player character’s always-on ability to slide from one end of a floor to another during a single turn, stopping only when running into an enemy or other obstacle. Conveniently enough, slamming into enemies, most of whom can only move one tile at a time, is also how the player attacks them. Each set of thirty-odd floors brings its own unique challenges, along with randomized potions and power-ups, and the chance to unlock new characters or even escape from the prison once and for all. Oh yes, the player is the billionth prisoner in this massive dungeon/jail, and their ultimate goal is freedom. I won’t spoil what happens as the end, but the trip to get there is snappy, fun (especially the boss battles), and very much worth it. If you happened to pick up that massive bundle that was on itch.io last month, Plunge was in it, and you should absolutely give it a go. 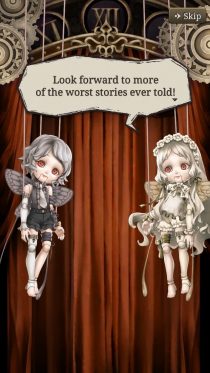 Right now, aside from Pokemon GO, the only other game I’m actively playing is also on iPhone: the long-awaited Yoko Taro joint SINoALICE. It’s a gacha game, a genre I’ve had zero experience with—Pokemon GO has some gacha elements, such as the egg and incubator system, but is very much its own thing. By gacha standards, SINoALICE supposedly isn’t very good, but I can’t really tell, and besides, being mechanically sub-par is one of the hallmarks of A Yoko Taro Game™ (never forget that the circumstances that led to NieR:Automata were something of a happy accident). The story concerns fairy tale characters out to slaughter anything and everything in a world called the Library, all to revive and meet their dead author; I’m currently playing as Snow White. There will probably be some twist at the end of hers and the others’ tales which reveals the horrible truth about the Library, but I’m not at that point yet. The gacha elements come in the form of weapons of random types and qualities, and just like in the DrakeNieR canon, they have their own stories which can be revealed bit by bit. The art, music, and writing are great, but as a game, I’m not sure what to make of it so far. I’ll at least stick with it long enough to finish Snow’s arc and play through some of the others’.

In between all of this, I’ve also been enjoying some manga. I read all the way through Yukarism, one of many short series in my backlog, and found its tale of a courtesan reborn as a high school-aged novelist to be entertaining, though not exactly top-shelf stuff. The same held true for the first volume of the self-explanatory fantasy The Seven Princes of the Thousand-Year Labyrinth, though I had a little bit of a scramble to pick up the remaining three books, as it seems this series has recently gone out of print. The third omnibus of Kimagure Orange Road was a delight, with the introduction of a major new character to throw even more wrenches in the love triangle at the heart of this wonderfully 80s rom-com classic. Shortcake Cake vol. 8 offered a more dramatic love triangle story, drawn with delicacy. BL Metamorphosis vol. 1 lived up to the hype, and another manga about an unlikely female friendship, Satoko and Nada, continued to entertain in vol. 3. More recently, after over a year, I finally picked up where I left off in Detroit Metal City, digging into volume five. 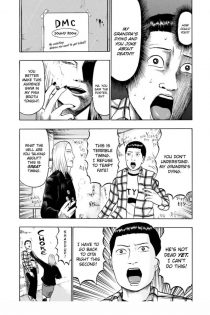 Detroit Metal City is a comedy unlike almost anything else in English-translated manga. It stars Soichi Negishi, a wholesome hipster with a bowl cut who loves indie pop bands like Flipper’s Guitar. He lives in Tokyo hoping to make it big as a musician, but suffers from a complete lack of talent—when it comes to pop, that is. His “day job” is as the lead singer and guitarist of the death metal band Detroit Metal City, and although he hates the music and the scene, he is shockingly good at his work. The manga chronicles his adventures both on and off the job, and examines how his two worlds intersect. A central question the manga poses: is the personality of Negishi’s rude and crude DMC alter ego, Johannes Krauser II, affecting his own, or have they always been one and the same?

Volume five comes no closer to answering that question, though it does introduce a new hipster friend for Negishi, catches us up with certain other musicians DMC has clashed with in the past, sends us on a trip back to Negishi’s hometown for a special event, and starts off a new multi-chapter storyline which will challenge DMC’s metal supremacy like never before.

After vol. 5 of Detroit Metal City, I started vol. 11 of Vinland Saga, another manga I hadn’t read in a long time (though for different reasons; namely, its publishing schedule). So far, it continues to be a must-read for me. I have no idea what I’ll read afterward, or what new game I’ll start. I’m not done unpacking yet, either. However, now that most of that latter work’s done, I can hopefully spend more time with the games and manga I so love.