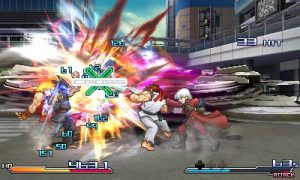 Crossover games, like most in the Super Robot Wars and Super Smash Bros. franchises, are all about the fanservice, and Project X Zone is no different. Developed in part by the creators of SRW, Project X Zone (pronounced “Project Cross Zone”) takes the basic idea behind the earlier Namco x Capcom, throws in Sega characters, arrives on the 3DS, and even gets itself officially localized into English. The licensing hoops probably weren’t nearly as big as they would’ve been for a SRW game, which typically involve characters and mecha from a couple dozen different anime, but even so, this sort of thing is a rare treat.

The characters are pulled from all sorts of titles, including some which are relatively obscure outside of Japan, such as Yumeria. There are many fighting game characters, a smattering from JRPGs and action/adventures, and some interesting one-offs, such as Frank West from Dead Rising. In what feels like cheating, there are also some of the protagonists from the aforementioned SRW franchise and Namco x Capcom. There’s also lots of boob jiggle, not only from fan-favorite obvious choices like Morrigan (Darkstalkers series) and KOS-MOS (Xenosaga series), but several (but thankfully not all) of the other women present, including one or two of the created-for-this-game original characters. It’s as though the creators felt that the fanservice in the form of multiple characters from different games wasn’t enough, and decided to put in some of the more traditional kind just to be sure. This strain of fanservice gets a little excessive at times, particularly when it comes to special attacks and certain bits of dialogue.

Characterization here is mostly on-point, but can be a bit repetitive when it comes to the heroes from more story-light games (one example: count the number of individual lines where Dante says the word “party”). On a final note about the character selection, I thought it was odd that anthropomorphic animal characters were left out. Sonic the Hedgehog is a bold omission and, given the game’s plot, Namco’s Klonoa would’ve been a very good fit, but such is not to be. Aside from Tron Bonne’s Servbots, there isn’t much on the cartoonier side.

As for the game itself, it’s a relatively perfunctory SRPG with action elements, broken up into chapters with lots of talky bits in between battles. Most of these chapters are long and can take between one and three hours to complete, thanks not only to the large party—which do battle in groups of two or three—but massive maps and up to a few dozen enemies populating each one. What this means is that a single round might involve fifty or so character groups and enemies acting in turn. The battle system is action-based, with attacks that can be strung together and combined with those of third “solo” and/or neighboring “support” characters. It’s not very deep, with the player’s main concern being how to pull off the proper timing to unleash these combos—enemies can be knocked into the air, meaning some attacks can miss—and when to use specials for that sweet experience boost when an enemy is defeated. Customization outside of battle is done in between chapters, though there’s not much of it, mainly just setting up teams with good solo partners and equipping the items—themselves from many different games—obtained during battles.

The story, as one might expect, has to do with characters suddenly finding themselves in worlds where they don’t belong, then teaming up to get to the bottom of things. There are callbacks to many of the represented games throughout the story, in terms of enemies faced, locations, plot points, music, and even sound and visual cues, but from what I can tell with the handful of represented games I was familiar with, there was nothing too spoilery for most of these originals. Overall, this is a nice bit of fluff for fans of Japanese games, if you can invest the time and don’t mind some frequently gratuitous, and mostly skippable, fanservice. It’s no longer available on the eShop, so if you’d like to pick this up, physical is the way to go. 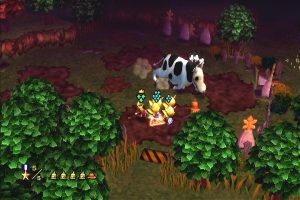 I enjoy management games, so for me, it was an immediate turn-off when, in Little King’s Story, I first gained the ability to build new structures only to learn that I had no control over where they can be placed. Other console games with town-building features, such as Dark Cloud 2 and Final Fantasy Crystal Chronicles: My Life as a King, let you do at least that much. This was how I learned that Little King’s Story is barely a simulation, and more like a Pikmin-esque action RPG.

The parts where the main character, default name Corobo, gets to do kingly tasks are mainly relegated to paying for things (buildings, upgrades, equipment), taking on quests for his citizens, and raising an army. The kingdom itself has little to offer on its own, and there isn’t much variety in the townspeople’s lines and independent actions. Even festivals, which occur whenever a neighboring kingdom is defeated, are dull affairs, with nothing much to do save for watching the villagers dance and talking to them to hear the same small handful of lines.

While the kingdom is mere window dressing, the real meat of the game lies in defeating UMA (short for “Unidentified Mysterious Animal[s]”), Guardians scattered about the land, and rival Kings. Corobo does this by building special facilities that enable him to turn his layabout subjects into workers of various classes, each with their own particular abilities. There’s your standard soldier and archer types, but also Farmers, who can unearth healing springs; Miners, who can break rocks; and so on.

Many enemy types, and the Guardians and Kings in particular, are best tackled by specific classes. For the gimmicky Kings, Corobo can find special hint sheets before a boss battle which can help the player narrow down who to bring, but even so, these fights often involve trial and error. The Guardians’ difficulty ramps up gradually, but the Kings’ are a bit more uneven, with some being more frustrating than others. Things get especially hairy the bigger your party gets, and when instant-kill attacks on the part of the enemies becomes more common. Any deceased party members will come back to life after one or two in-game days, but that is of little comfort during the heat of battle. The boss battles grow longer and longer as the game goes on as well, but the only checkpointing occurs at the beginning of each fight. Imagine taking on the multi-stage final battle and getting wiped out near the end only to have to start the whole thing all over again. It’s the sort of old-school design which, as I grow older, I have less and less patience for.

On that note, I feel like I might’ve loved Little King’s Story back when it was first released. The children’s book feel, combined with the painterly cutscenes and thoughtfully-arranged classical music, make for a lovely aesthetic. The characters have a quirky charm—although some of them wouldn’t fly in today’s world—and the map design is very good. However, actually playing the thing felt tedious, particularly when it came to troop management, both via menus and out on the field, and I never got over the letdown of the kingdom’s shallowness. There’s also some optional bits that feel like they were designed to sell strategy guides, they’re that opaque. It’s disappointing, but Little King’s Story didn’t leave much of a good impression on me.