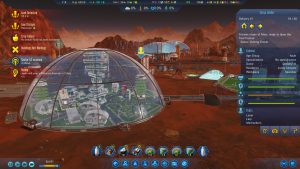 During the past decade or so, Haemimont Games became my favorite developer of management sims. I sank literally hundreds of hours into their trilogy of modern Tropico games, and also enjoyed their older, more grounded Imperium Romanum. Normally, I wouldn’t go for a hard sci-fi-themed builder, nor do I have any particular feelings about publisher Paradox Interactive, but Haemimont’s involvement was a big plus for me. Their signature style shines through in Surviving Mars, with approachable yet hard to master systems, a keen sense of humor, and a soundtrack that ranges from pleasant to earwormy.

Surviving Mars puts the player in the shoes of a nameless commander whose goal is to explore, exploit, colonize and—via the Green Planet expansion—terraform the titular world. The “Surviving” in the title does a lot of work as well. Not only do food supplies and an economy have to be managed, but so too do water and oxygen levels; I’ve asphyxiated dozens of colonists in at least one game due to a series of careless mistakes. Juggling water and oxygen along with food, concrete, and metals, in between exploring, trading, and other tasks, can add up to a lot of potential headaches, even if you don’t wind up suffocating half your colony. In short, this is a more complex and difficult game than Haemimont’s previous city builders, with a steeper learning curve. Still, it’s worth it to see your colony grow and expand across the Martian surface and it’s magical, if one chooses to terraform, to witness it transform into something more Earth-like.

As mentioned before, there’s no campaign, but a set of twelve “mysteries”, which can be assigned when setting up a game, can serve as a sort of story mode. These mysteries involve aliens, humans, and things that are neither, and vary in tone and difficulty. Other variables which change how a game plays out include choice of country (or company) as sponsor for your mission and where on Mars your colony starts out—though, unfortunately, there is no way to see what your chosen patch of terrain actually looks before starting a new game.

Besides this lack of terrain preview, the most frustrating thing about Surviving Mars is a bug: sometimes, often when either Windows or Steam has an update pending, the game will crash. This happens rarely enough (and usually right after loading a save file) that this isn’t too annoying, but it’s worth keeping in mind should you be the type of player who has little patience for such technical issues. 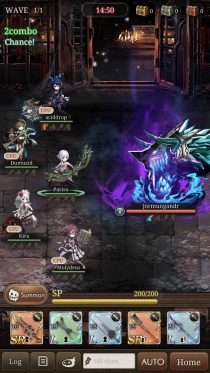 As I understand it, SINoALICE, which finally came out in North America and Europe this summer after three years of being Japan-only, is fairly outdated for a gacha game. The bleeding edge of gacha nowadays is Genshin Impact, a fully 3D open-world adventure stuffed to the gills with content. However, I haven’t touched Genshin in some time—it’s pretty and has a great battle system, but is also highly derivative and missing a certain something—yet continue to play SINoALICE every day.

SINoALICE is set in a realm called the Library, where characters from classic tales have set out to revive their authors by slaughtering Nightmares, goaded on all the while by the creepy marionettes Parrah and Noya. Each character embodies a certain trait, which is where the game’s biggest inconsistencies lie. For instance, some take on the traits of their stories’ villains (Red Riding Hood’s Brutality and Cinderella’s Depravity are two good examples), while others have traits that would be more suitable under different characters (Dorothy, from The Wizard of Oz, has Curiosity, which seems like it would be a better fit for Alice, who has Bondage). A few traits feel appropriate (Pinocchio’s Dependence, Little Mermaid’s Misery), but otherwise, most of them are quirky choices at best and lazy ones at worst. Anyway, the cast fights through the Library, sometimes struggling with what they learn about themselves in the process, and then they reach the third act, which is where things really start to go all Yoko Taro.

Yoko’s signature is all over the game, from the dark themes within the main and event stories, to the twisted weapon tales (which vary wildly in quality this time), to the random injections of snarky humor. There’s also a haunting soundtrack by Keiichi Okabe, which doesn’t hit the heights of his work on the NieR games, but is still quite good; quality Japanese voice acting; and delicate, and frequently racy, character designs. The equipment options are fairly straightforward, with eight classes of weapons, sets of armor, and a variety of summons. Story combat typically takes place in “chapters” of three to five rounds using a simple three-element system, and certain special enemies require a little strategy to take down. This is one of those RPGs where the basics are easy to grasp, and from there, it’s mostly a matter of grinding for upgrades to raise your stats.

The gacha aspect involves cashing in Twilight Crystals, which can be obtained through completing story quests and missions, special promotions, or through cold, hard cash—though they’re absurdly expensive. The drop rates for the “Super Rare” weapons—some of which unlock new classes—and summons are as low as you might expect; there’s one character, Gretel, who I like but whose variants I’ve never had any good luck getting through gacha pulls. Also present is some limited multiplayer in the form of drop-in co-op and daily guild vs. guild battles; as someone who doesn’t do much of that sort of thing, I’m having fun playing and sometimes chatting with others through the game. It’s these social aspects, along with the stories and the addictive grind, that have kept me playing for this long. 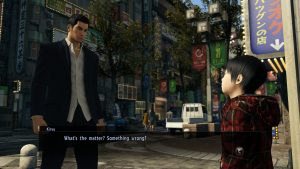 This is my first experience with a game in the Yakuza series, and although I’m enjoying it, I also feel overwhelmed by it. In between the two protagonists, Kazuma Kiryu and Goro Majima, there are two impressively detailed cities to explore and a wealth of things to do: minigames like karaoke, shogi, darts, pool, mahjong, and more; arcade games to play, including the actual Space Harrier and Out Run; and side stories galore. I’ve infiltrated a cult, won crane machine toys for a little girl, helped out with a music video, and had my fortune told, amongst other things. Oh, and there’s also three fighting styles for each character to master, as well as their own unique management sims: Real Estate Royale for Kiryu, and Cabaret Club Czar for Majima.

I haven’t even gotten to the main storyline yet, which is set in 1988, when Japan’s economy was still booming. Kiryu, in Kamurocho (based on Shinjuku’s Kabukicho) finds himself a pawn in a battle between yakuza clans and other parties over the Empty Lot, a prime piece of real estate in one of Asia’s hottest markets. Meanwhile, in Osaka’s Sotenbori (based on Dotonbori), Majima runs the most popular cabaret in town while trying to get back into his former yakuza family’s good graces, and soon finds himself with more trouble than he’d bargained for. Kiryu is a little too straight-laced for his own good, and Majima the opposite, but both are kind-hearted despite their criminal activities and much easier to relate to than their equivalents in Rockstar’s Grand Theft Auto series.

It’s a manly game set in a manly world, full of grimacing, fistfights, and endless posturing and grasping for power. For interesting female characters, they can mostly be found in the side stories, and even there, the game revels in its chauvinism, though it also treats its women with respect and feels true to the setting. The core cast and their relationships to each other, to say nothing of the yakuza family hierarchies, are just complex enough to be a little confusing at times, but the main story is relatively easy to follow, even with the action split between two protagonists.

Yakuza 0 is as good an introduction to the series as I’d heard, but it’s also a bit much, and I don’t see myself playing the next chronological entry on PC, Yakuza Kiwami, anytime soon. I rarely play open-world games to begin with, and my time so far with Yakuza 0 has served to remind me what I find both compelling and intimidating about them. I hope to be finished with Yakuza 0, and perhaps Surviving Mars as well, by the end of the year, so that I can get a fresh start with my gaming in 2021.