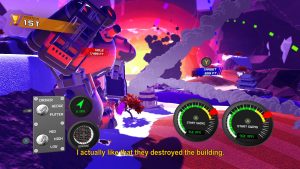 For their follow-up to the revolving limo adventure Roundabout, No Goblin went with a similarly wacky idea: giant robots playing golf. As one might expect, the influence of anime is all over this game, from the mechs themselves to the 2D cutscenes, whose visual style resembles an OVA from the late 80s. One touch I didn’t expect was an extended parody of a certain famous giant robot show. It is hilarious, as is the writing in general. I particularly enjoyed the commentary, which is done in the same calm, restrained tone as one might expect from a TV broadcast of regular old golf.

The golfing itself has a little bit of a learning curve, for a couple of reasons. The first of these is that most of the campaign missions are variants of Speedgolf as opposed to the traditional sort, and the game doesn’t do much of anything to warn you about this. To win the round, one merely has to sink their ball the fastest. The rest of the campaign’s missions are played using the standard rule of whoever gets a hole in one with the least number of strokes is the winner. The second thing that takes getting used to is that the mechs vary quite a bit in how they control. The basic controls of movement, attacking (some parts of the courses are destructible), club selection, and lining up the shot are the same between mechs, but the action of accurately swinging the club ranges from trigger-operated dials to synchronization meters requiring well-timed button presses. These control styles highlight the differences between mechs, and can help someone narrow down a favorite if they want to dive into the multiplayer, but as I said, there is a slight learning curve with each one.

Like Roundabout, 100ft Robot Golf can be challenging, particularly if you’re after the gold medals needed to unlock certain cosmetics. However, it also shares that game’s unique retro-fueled comedic spirit. A few of the cutscenes didn’t quite nail the anime flavor—in particular, those featuring walk cycles or other types of full-body movement—but otherwise, this game’s aesthetic is spot-on. There’s also not much variety in the landscapes, but that’s a minor concern, as the layouts of each hole are unique. Overall, a very funny game with an enjoyable basic conceit, and which should be especially appealing to old school anime fans. 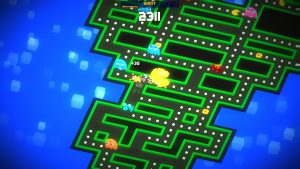 It’s fascinating seeing how old video game franchises get revived. In the case of Pac-Man 256, an endless runner based on classic Pac-Man mechanics, one might wonder why this hasn’t been done before. As in the original arcade games, Pac-Man gobbles dots and Power Pellets while dodging or destroying a variety of ghosts. However, here, the maze never ends, and the player is pushed ever onward by a massive “glitch” below which destroys anything it touches and marches ever upward. In addition, each of the ghosts follows a specific pattern this time, and there’s more special pickups than just Power Pellets and fruit.

These unlockable, assignable pickups are the highlight of the game. There’s one which causes Pac-Man to leave a trail of lava behind him; another which creates a tornado that randomly travels around the screen to destroy ghosts; yet another which turns Pac-Man giant, crushing any ghost in his path; and so on. Like the Power Pellets, each of these abilities comes with an extendable time limit—your remaining time is indicated in a bar at the top of the screen—but they also differ in that they can be upgraded. Upgrades can be purchased by spending coins collected during play and by completing missions.

Point multipliers, largely courtesy of the fruit, are one thing that score chasers will want to keep in mind. Then there’s chaining dots and other pickups. Reaching a chain of 256 pickups results in every currently active ghost being wiped from the screen in a celebratory burst. It’s a visual treat, as is the rest of the game. That said, now is a good time to mention the multiple graphical skins, including a few based on previous series entries like Pac-Mania. The only bad thing about Pac-Man 256 is the nearly complete lack of music, but if you’re fine with that, it’s a fantastic modern-day arcade-style game. 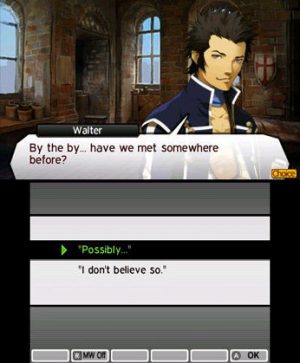 I’ve been covering the Shin Megami Tensei, aka MegaTen, series since this blog’s inception. My least favorite of the bunch was, and remains, Shin Megami Tensei: Nocturne, the third entry in the main series and, incidentally, the third MegaTen that I ever played. That said, I’m pleased to report that Shin Megami Tensei IV is better than its most direct predecessor in just about every way.

SMTIV has a very different main setting than the norm for this series. In this installment, it is the Eastern Kingdom of Mikado, a feudal-style country consisting of a massive city and some rural villages. The player character is a newbie, or Prentice, Samurai, a soldier whose job it is to keep the kingdom safe from the demons in Naraku, a subterranean dungeon. He and his fellow Prentices carry out missions for both Mikado’s military and religious faction and eventually discover that there’s much more to Naraku than meets the eye. As in previous MegaTens, the protagonist is mute, though his main companions are more interesting and relatable than their Nocturne equivalents. The plot is more involved as well, containing developments and twists that kept me wanting to know what would happen next. There’s also quite a bit less of the offensive elements that pervaded Nocturne, though they haven’t completely gone away.

The press-turn battle system and demon recruitment and fusion are more or less the same as always, though a handful of little tweaks—such as unlockable party upgrades and being able to fuse directly from the menu—bring these aspects up to date. This isn’t to say that instantly being wiped out by a particularly aggressive demon is a thing that no longer happens—it totally does—but the quality of life changes make for some less stressful gameplay. Regarding demon fusion and leveling in particular, and my distaste for how it worked in Nocturne, I’ve since come to understand the practical reasons why these systems are set up this way, and have also started to see it as just another cruel element of MegaTen’s often cruel settings.

And SMTIV‘s world is nothing if not cruel. There is some dark, dark stuff that happens throughout the protagonist’s adventure, and none of the choices I was presented with at the very end were devoid of serious downsides. As I typically do for these games, I went in what I believed to be the “neutral” direction, but I was left uncomfortable with this choice, which is not typical of me when it comes to MegaTen.

As for SMTIV‘s downsides, some of the sidequests can be slogs, the maps often contain a bit less information than I’d like, and there were one or two plot threads that were never satisfactorily resolved (though that might be explained by the choices I made throughout the game). Otherwise, I found it to be a fascinating, morally complex JRPG and a more than worthwhile entry in the franchise.