It’s a much bigger adventure than The Legend of Zelda, and the number and types of items there are to collect reflect that. In addition to familiar tools such as the boomerang and bow, there’s a hammer, a flute, magical medallions, a book used to translate ancient text, and several others. Many of these items are highly situational and, outside of battle, are only used once to find new areas or items. On a related note, the amount of secrets which can be discovered throughout the course of the game has also multiplied, though the vast majority of them are not as deeply buried, thanks in part to a robust hint system fueled by a large cast of NPCs as well as fortune teller’s shops. The fortune tellers, however, sometimes give you hints well before you can act on them, which led me to a lot of time wasted searching for certain items which didn’t exist in the game yet. Meanwhile, some vitally important information is only barely hinted at, if it’s given at all.

The more obscure secrets, both mandatory and optional, must be found through careful exploration, and can often only be accessed after receiving a certain piece of equipment. As in my review of the first game, I’m once again tempted to draw comparisons to the Metroid series. Not only are optional items and areas gated off depending on Link’s gear, but also access to story-related dungeons. In The Legend of Zelda, it’s possible to tackle dungeons out of order, but it’s much harder to do so here. For example, in order to reach the region where the sixth Dark World dungeon is located, Link must acquire a specific equipment upgrade from the fifth dungeon.

The Metroid-esque progression in A Link to the Past didn’t surprise me, but what did was how much a certain part of the game reminded me of Ys II: The Final Chapter. Both the Zelda and Ys series are action RPGs which feature specialized tools and large bosses as major components, and while the first Zelda predates the first Ys by two years, Ys II debuted in 1989, three years before A Link to the Past. Anyway, here’s that section, spoilers and all: at one point in A Link to the Past, Link travels to the Dark World for the first time, but because he lacks the Moon Pearl, he is transformed into a rabbit-like beast and can talk to two monsters there. This reminded me of how in Ys II, the protagonist Adol acquires an ability which turns him into a monster and allows him to chat with other monsters. The implementation in A Link to the Past is different—Link’s transformation is involuntary and doesn’t change how most monsters treat him—but I found it to be an interesting resemblance. Also, speaking of the Moon Pearl, which is simply another tool in Link’s arsenal, an item called the Black Pearl happens to be a core part of Ys II‘s story. All of this makes me wonder how much the Ys series might’ve influenced the Zelda one, and vice versa, over the years. 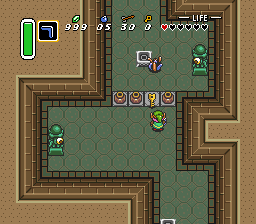 What is undeniable is that A Link to the Past draws directly from The Legend of Zelda in how it is structured. As in the older game, all action takes place looking top-down, divided into individual segments, though many of them are bigger than a single screen this time, and the addition of an in-game overworld map makes getting around a bit easier. In the dungeons, maps, compasses, and keys all make returns, and several new gimmicks are gradually introduced. Enemies and locations both old and new are present, with the most notable return of the latter being Death Mountain. On a very different note, there are a couple of small Mario series Easter eggs, most notably portraits of the titular red-hatted plumber in some houses.

The relatively tight design of both the overworld and the dungeons is another carry-over from The Legend of Zelda, and is actually improved upon. Progress through the game is organized in a way that makes sense; it’s much easier to figure out where to go next than in TLoZ, thanks to the aforementioned maps and hint systems. The graphics are attractive and clear, and the iconic music remains catchy, yet is thankfully not as repetitive as in the first game. Each area and dungeon has a distinctive look and feel, and there’s a nice diversity to the enemies and obstacles that attempt to hinder Link’s journey. The only time I ran into a problem with how the game’s world was laid out was in the final dungeon, which is designed in such a way so that one of the keys is entirely missable (as an aside, being able to leave a dungeon and come back to it without resetting was a feature I especially liked, but not so much in this case). This key is for an area which isn’t mandatory, but as I went into every dungeon with the intent of seeing everything, this proved to be an annoyance. Thankfully, I was playing the game on a SNES Classic and was diligently using save states; I just went back to one from before I had started this dungeon and went through it again.

Spoiler ahead: this same dungeon also featured a personal pet peeve in the form of encore boss battles. Speaking of the bosses, a few of them had somewhat samey gimmicks, a problem which also crops up another classic 16-bit RPG, Chrono Trigger. In the case of A Link to the Past, this meant bosses made of multiple individual parts which must be whittled down, after which the last part may become (or just is) stronger than the rest and require more hits than the others.

The Legend of Zelda: A Link to the Past is flawed, but these flaws are few, and the polish and care that has gone into the overall work are more evident than its problems. Its plot is trite in a way which is both Nintendo-esque and of its time, but the journey itself makes it worth playing. It has been interesting to see what has been preserved, and what has been improved upon, from The Legend of Zelda, and I found the exploration aspects to be engrossing, even if I ultimately did not find everything. A Link to the Past has aged very well indeed, and I look forward to engaging in more of Link’s 2D adventures sometime in the future.

Some quick site business: As mentioned on Twitter this past Monday, the Games section has been retitled Criticism. This was done mainly to avoid any confusion with Projects, particularly in regards to the Holiday Cards and similar works listed on that page. In addition, manga and anime reviews and best-ofs have been added to Criticism.