On the PC at least, I almost never buy triple A games at launch, the collector’s editions of the three StarCraft II installments being a notable exception. These games ran fine once I fired them up, a testament to Blizzard’s obsessive attention to technical polish. At the time the second part of the series, Heart of the Swarm, launched, the hardware I used to play it was seven years old, the same age as the machine I first installed Doom Eternal on.

As with my previous Boot Camped Mac Pro, I had future-proofed my desktop computer enough so that it would meet the minimum requirements for the likes of Doom Eternal here in the year 2020. However, due to a combination of Apple more or less abandoning Boot Camp support for the 2013 Mac Pro, and AMD being AMD, I suffered through several rounds of driver update attempts only to wind up with a machine that wouldn’t be able to run Doom Eternal after all. It ended up that the only way I could do so was with a gaming PC borrowed from bitprophet, featuring some newer hardware.

It looks good, but not much more on medium/high graphics settings than DOOM 2016 did. Beyond the visuals, the enemy AI seems to have gotten an overhaul; their movements are tough to predict at times. It is this AI which, in part, has led to my frustration with the “Hurt Me Plenty” difficulty. “Hurt Me Plenty” is typically the series’ version of “Normal” and what I have played through every canonical PC Doom game on (or its equivalent, in the case of Doom 3). However, in Doom Eternal, “Hurt Me Plenty” feels more brutal than it has in the past. In the battle arena areas of the campaign’s maps, waves of enemies become punishingly difficult by the second level. Cacodemons aren’t so bad this time, but Hell Knights, Spider Mastermind-esque Arachnotrons, and Mancubuses are all huge pains to deal with. Revenants are annoying as always, but especially so when fending off one or two of those big bruisers, plus assorted zombies, Imps, and demonified Marines. Dreading to find out what traditional toughies such as Pinkies, Barons of Hell, and Cyberdemons will be like later on, I have reluctantly decided to dial down the difficulty. Thankfully, “I’m Too Young To Die” is more manageable thus far, plus I was able to switch to this difficulty on the fly. 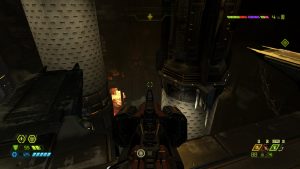 Aside from the difficulty spike, some other things feel different this time. Chief amongst these is the level design. The sprawling, nook-and-cranny filled maps from Doom 2016 are back, but there are some additional wrinkles added which alter their overall feel. Thanks to new wall climbing and air dashing moves, there are more bottomless pits than before, pockmarked with dented sections of wall, platforms that may or may not fall after a few seconds, and vertical obstacles. Rather than being level design that happens to support new movement gimmicks, it feels like these segments were made to show them off, oftentimes requiring that they be used in quick succession. It can be very easy to mix up the controls for climbing, dashing, and jumping when there’s only a second or two to spare, and when some moves must be used two (or three, or four) times in a row. These segments can be entertaining and challenging, don’t get me wrong, but they also don’t feel very Doom-like. If anything, they remind me of the similarly platforming-heavy Metroid Prime games.

On that note, my impression so far of Doom Eternal is that, in the grand pantheon of all things Doom, it sits somewhere between Doom II: Hell on Earth and Doom 3. Like Doom II, Eternal aims to be bigger and better, and even starts with Earth being overrun by the forces of Hell. However, like Doom 3, it doesn’t feel quite enough like Doom, though not to the extent that that earlier game did.

Doom 3‘s disconnect from what Doom is was largely in its tone: it leaned into a survival horror template, with an emphasis on darkness and scariness, and a Doomguy who felt much more like an ordinary human than the original. It’s telling that Doom 3 doesn’t really start to feel like Doom until the player arrives in Hell. Where Doom Eternal lacks in Doominess is a complete 180° from Doom 3‘s case. Now, Doomguy doesn’t feel human enough. Aside from a few bits here and there, including some of the Glory Kill animations, the previous game’s sense of humor is in short supply, plus the story leans hard into the Sentinel mythology that was lightly touched upon in DOOM 2016. The lore of the Sentinel race from which the Doom Slayer (née Doomguy) has originated from is alluded to throughout in cutscenes, and goes into excruciating detail in many of the scattered text files, which seem more numerous than they did in the previous game. It’s sort of the Halo 3 of Doom games, which is not a direction I ever wanted this series to go in. 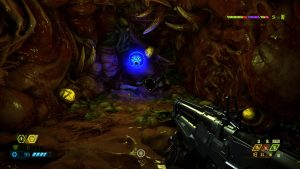 Doom Eternal does some things very well, though. The combat is as slick as it was in its predecessor, and a fan-favorite weapon, the Super Shotgun, makes a welcome return. There’s opportunities to play from a demon’s perspective, both within the campaign and outside of it; players can even “invade” others’ games (a feature which can thankfully be disabled). The parts of the levels which don’t involve tricky platforming are satisfying to poke around in, although I’ve yet to come across one as memorable as DOOM 2016’s Foundry or Argent Tower. As has long been standard in this series, there are a decent number of nods to previous Doom games, as well as some to other id and Bethesda franchises. Secrets abound, from hidden collectibles and classic music tracks to special challenges which unlock upgrade points. On a more ambivalent note, there are a bunch of different options for upgrading weapons, equipment, and so on, almost to the point of being overwhelming. Rounding all this out are some nice quality-of-life features, such as fast travel, which becomes available once most of a given level has been explored.

As the follow-up to one of the best single-player run-and-gun FPS campaigns of all time, my expectations for Doom Eternal were high. A handful of these were met, but in the case of others, I feel like the developers have inched away from some of what makes Doom, Doom. The balance between seriousness and humor, scariness and badassery, and constant movement and careful exploration is one that both the original Doom and its 2016 reboot nailed, with varying results for the sequels in-between. Hopefully, the rest of the game regains some of what was missing from the first few levels, but right now, I’m expecting more of the same, just with tougher enemies and trickier traversals. However, if it ends with John Romero’s head on a pike, all might be forgiven.