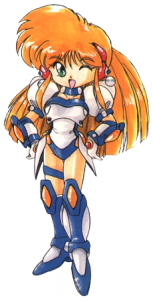 Remember that huge stack of game soundtracks I bought awhile ago? I’m still working my way through them. Have managed to listen to most of them, but one I haven’t touched at all is Front Mission 5 ~Scars of the War~ Original Soundtrack. A big part of this is because, as I said before, I haven’t played the actual game. Although this sort of thing hasn’t stopped me before, this is Front Mission, and therefore, special in my eyes.

The group completed the beta translation patch of Front Mission 5 in December of last year, so all I would need to do is to hunt down a copy of the game and the necessary PS2 modding tools to get it to run. However, this brings me to the one criticism I have of the project. If the group’s goal is to draw Square Enix’s attention to English-speaking Front Mission 5 fans, then why make it so the patch works only on the non-Ultimate Hits verion of the game, which has long been out of print? I think a spike in sales of new copies of FM5, rather than secondhand ones, would push Square to consider an official release even more. For historical evidence, I point to Capcom, who localized the DS port of Gyakuten Saiban in North America (as Phoenix Wright: Ace Attorney) after noticing all the sales of the bilingual game that were coming from outside of Japan. Anyway, I know the fan translation team is well aware of this issue, and I hope they make an Ultimate Hits version of the FM5 patch a priority for future releases.

With FM5 on my mind lately, I got to thinking about what other Japanese games never made it over here that I would like to see complete translations of. There are some games that are “import friendly” in that you don’t have to know a lot of Japanese—if any—to be able to enjoy them, so those aren’t a problem. There are also those like Tales of Graces, Front Mission 2089: Border of Madness, and Game Center CX: Arino’s Challenge 2 that are still recent enough to have a chance of localization, slim though they may be. What’s left are the text-heavy titles which are on dead systems and have small cult followings, if they’re lucky. What’s left, in other words, are games like those on my wishlist.

Ys V: Lost Kefin, Kingdom of Sand, Super Famicom – I’m cheating a little bit here with a couple of them, including this first one. You see, a fan translation of Ys V was started several years ago, but the patch is currently incomplete. This leaves Ys V as the only main-series Ys storyline whose translation has never been made available. Rather frustrating if you’re interested in the Ys canon and don’t read Japanese, but even after all these years, the patching project is not dead, so there’s still hope.

Galaxy Fraulein Yuna and Galaxy Fraulein Yuna 2, PC Engine – And now for something completely different: visual novels! My initial exposure to Galaxy Fraulein Yuna came in the form of the first OVA series; later, I saw the much more coherent second series, Galaxy Fraulein Yuna Returns. Each storyline follows the adventures of teenage Yuna Kagurazaka, who is the savior of the universe, a popular celebrity, and a regular girl all at the same time. It’s a pretty wacky series, with some amazingly good character designs, all courtesy of mecha designer and Gundam Girl artist Mika Akitaka.

Some years ago, I learned that these anime were based on a “digital comic” game series, which gave me a better perspective on the character-stuffed OVAs. However, aside from the Sega Saturn’s Galaxy Fraulein Yuna 3 these games have never been translated into English, by anyone. The Yuna games have shown up on several systems, but the first two in the series are on the PC Engine, thus, my wishlist request. A PSP collection of the first two Yuna games as well as a related title, Galaxy Policewoman Sapphire, was published only a couple of years ago, so it seems there’s still interest in these oldies, at least in Japan.

Chocobo Stallion, PlayStation – Unlike the others on this list, I actually own this game. If I recall, I first learned about Chocobo Stallion while reading some information about a different Squaresoft-related thing. The idea of a chocobo sim racer intrigued me, and I later picked up a cheap copy on eBay, only to find that this was not an import-friendly game in the least. There are no English-language guides of any sort on GameFAQs or anywhere, and, naturally, no translation patches. I’ve long had the idea to make a rudimentary guide of my own, but have yet to get around to putting something together.

Segagaga, Dreamcast – A translation of this navel-gazing RPG/sim is the dream of every English-speaking Sega fan ever, and as with Ys V, is an actual project that has been ongoing, with occasional updates. Started in 2006, the project lead is still pushing forward with it as of September 2009. Will it ever see the light of day? Let’s hope it does!