It was time to come down from the space station. The lack of natural, Earth gravity wasn’t good for my body, and one could only take so much of Arona’s wheeling and dealing after awhile. I had to return to familiar territory. Fortunately, a budget flight to a Caribbean island grouping known as Tropico came upon my radar. Having grown up in Miami and its environs—as entrenched in the world of Carribean and Central and South American politics as it is its cultures—I had some minor reservations, given the borderline-snarky brochure about Tropico, but I was also eager to see palm trees and soak in streets filled with sunshine and Spanish again. Yes, there would be a lot of Spanish; none of the English patois of my own West Indian side of the family, no Hatian Creole, no Brazilian Portuguese. Still, I suppose this simplified things a bit. 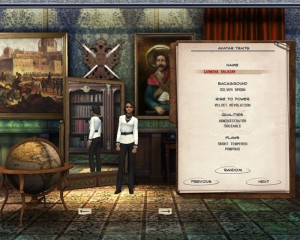 My return to Earth involved a bit of time travel, and I was thrust back into the 1950s, in the thick of the Cold War. I took on the alias of “Carmina Salazar” and found myself alarmed at both the limited wardrobe options she/I was presented with compared with the men’s closet, as well as the fact that her/my advisor, throughout our administrations, seemed to assume that the presidente was, in fact, a man the entire time. Even Carmina’s musings to herself about her own beauty as she walked the streets and countrysides seemed not to be enough to convey her femininity. Did the presidential advisor, Penultimo, not get out much?

Perhaps Penultimo simply wasn’t a very good listener. There was one administration where I was advised to build up a nice nest egg for myself in my Swiss bank account. However, after my first specific order through Penultimo, which netted me a cool three thou, subsequent ones wouldn’t go through for some reason. I finally mucked my way through things and amassed the required balance, but it took the more routine measure of money laundering through a bank I had built myself to make most of that ill-gotten cash. This was not the only technical problem I faced, though it was the only one that involved miscommunication with my advisor; the others were minor, of the sort the computer back on the space station might term “glitches”, and simply stepping away for a bit and coming back seemed to right things. Then there were the less technical ones, the typos in the memos that Penultimo would present to me during a few specific administrations. In one instance, the name of a country was spelled both correctly and incorrectly within the same note!

There were other frustrating moments, though some of these came out of my own moral quandries. For the most part, I refused to grow tobacco and erect cigar factories, which severely hampered me during an administration on an island on which tobacco was practically the only thing that would grow. Then there were the offshore oil deposits. Considering the indescribably disgusting mess going on in the present-day Gulf of Mexico, I stayed away from offshore rigs until the very end, when the need to amass an incredible amount of money presented itself. 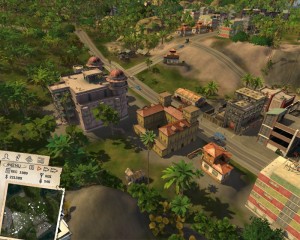 Still, despite the tough work, long hours, and little annoyances, the islands of Tropico were beautiful places to manage. Palm trees swayed gently on landscapes of rolling hills, flat, sandy beaches, and steep cliffsides. The terrain was oftentimes tricky to navigate, but the well-worn footpaths, probably made by natives from a more agrarian past, were a great help. Laying roads straight was another fussy bit of business, but I got the hang of it after awhile, and would even sometimes go back and repave the old crooked roads that I had been presented with at the start of my term of an island. The buildings for the islands inhabitants all proved to be useful in one way or another. Those for the tourists—them being a picky bunch—not so much. When land becomes flattened to place a building, sometimes it’s a crapshoot as to whether or not it looks okay, or just silly. Meanwhile, the people had their problems and demands, as people everywhere do, but that’s life, yeah? At least I could silence the radio announcer, Juanito, when his interruptions got too distracting.

My time running the islands of Tropico has ended, at least for now. It was a interesting and engrossing series of terms, but not enough to make me forget about that spinning metal bicycle tyre some light years away from here. That place will likely remain my first choice should I be torn between a gig as Administrator, and one as El Presidente. Still, I wouldn’t mind dipping my toes into that clear blue water again in the future, lively Latin music playing on the radio. It’d be hard to say no to such a beautiful place.