There was a post on Kotaku that made the rounds awhile back that attempted to answer the question, “What if Super Mario Bros. was made in 2010?” Although I myself would’ve added a ton of logos at the beginning, it hit the mark, showing just how much mandatory tutorials, dumb achievements, and so forth routinely interrupt what used to be a pure experience. 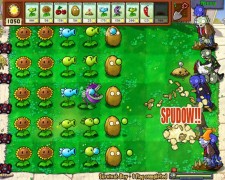 Remember when you would go to an arcade, or turn on your NES, to play, say, Super Mario Bros.? You’d just get a starting screen with a small copyright notice and an option to select the number of players, and away you’d go. No fuss, nothing telling you how to move or attack before setting you free to explore the world, break blocks, defeat enemies, or what have you. You just dove right in and played. These days, it’s hard to find that sort of experience outside of retrogames (of course) and casual games, or as they might be better termed, “retrogames from the future”.

One of the current kings of retrogames from the future is Popcap, and one of their handful of popular titles, even amongst “hardcore” types, is Plants vs. Zombies, a strategy game where the goal is to use garden vegetables and the like to keep a horde of brainthirsty undead from making it all the way across your suburban lawn and into your equally suburban house. It had been enthusiastically recommended to me not long after its release by CloudANDTidus, and although I took forever even just to check out the demo (sorry about that, Clidus), I’m glad I did. Plants vs. Zombies is fun, funny, addictive, and aside from a brief logo screen, an equally brief bit of loading time at the beginning, and a small smattering of Steam achievements (none of which are of the silly “First mission beaten” variety), at its core, it feels like it could’ve been made twenty years ago.

A bit more about how the game plays. As I understand it, Plants vs. Zombies is in the trendy “Tower Defense” genre, which I am not too familiar with. However, if a “Tower Defense” game means an RTS without building construction and offensive maneuvering, where all one has to worry about is unit generation, resource gathering, and defending the base, then I guess Plants vs. Zombies fits the bill. 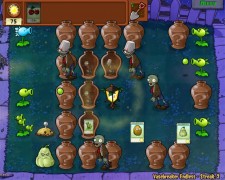 Vasebreaker requires a lot of luck, but is also a lot of fun.

The game takes place on a loosely defined grid outside your home. Only Peashooters (which, naturally, shoot out pea bullets) are available at first, but new species become unlocked as the Adventure mode wears on. So too do new enemies show up, and features become unlocked, including the Minigame, Puzzle, and Survival modes. Some of these modes, particularly Vasebreaker and certain minigames, have a heavy element of luck involved, but this is obvious by their design and does not make them any less fun.

The pacing and aesthetics have a lot to do with keeping things lively. The individual missions, whatever mode they’re in, are just the right length, and can be paused at any time and picked up again later, even if you quit out of the game. The awesome end credits notwithstanding, the music is inoffensive and not particularly earwormy, which is fine with me. Your plants are brightly-colored and bouncy, with beady, dark pupils, while the zombies are bug-eyed and tend to shamble forward at a more languid pace. In between all this, you’ll talk to your neighbor Dave, aka “Crazy Dave”, a scruffy fellow who wears a saucepan on his head and knows a thing or two about zombies (he can also be counted on for some lines of laugh-out-loud dialogue, including a gamer’s in-joke or two).

This game offers so much variety and straight-up fun that it’s hard to put down at times. Flaws are few, the most damning being that your mouse cursor stays the same as it is in Windows. The lack of a custom, game-specific cursor wouldn’t be a problem were it not for the fact that the action can get very hectic at times, especially in Survival mode, and it’s far too easy to lose track of the damned thing. I also wish there was a way to archive the Tree of Wisdom’s sayings for future reference, but there doesn’t seem to be such an option, unless I’m overlooking something. Other than that, I’ve no complaints, and like CloudANDTidus did before me, I urge you all to at least check out the demo for Plants vs. Zombies as soon as possible, or at least before the zombies eat your brains.