Rather, it’s Steam’s fault as to why I haven’t been posting here lately. They had a sale on Tropico 3 that I couldn’t pass up, so I bit on that, and also finally picked up Plants vs. Zombies, and ended up being hooked on them both. Oh, and if those two weren’t enough, on the same day I bought them, Kirby Super Star came out on Virtual Console! It’s been a long time since I purchased three games in one day, and I think three downloadable titles all at once is a personal first. 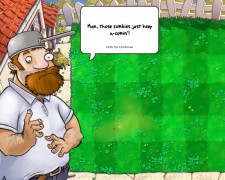 You said it, Crazy Dave.

Plants vs. Zombies was the first of the three I dove into, playing all the way through to the end of Adventure mode and then some, until all the minigames and other extra game modes were cleared. Tropico 3, being a management sim, was a much lengthier time-sink, moreso when taken into consideration the fact that a fair number of the campaign’s missions simply require you to stay in power for a set amount of time, rather than just amass a certain amount of resources or some such. Both games had their share of quirks and annoyances—the latter moreso than the former—but I’ll get into those later, really. I also have to beat Dragon Quest V, but one reason I’ve been putting that off, besides the PC game distractions, is that I don’t want it to end…

Have to play more of Kirby Super Star as well. Did clear the first two platforming games in this most unusual collection of little Kirbies—neither of which did much for me—awhile ago, but recently I went back to it and made some more progress in “The Great Cave Offensive”, a treasure-hunting platformer which is pretty decent. I’m still dreading additional attempts at the racing/eating game against King Dedede, which gets especially tricky on the third course (no pun intended); they’re the types of races where memorization will doubtless play a big role in beating the damned things.

Also, been going back to Pokemon Platinum every once in awhile. I’m currently somewhere in the third gym. Party-wise, Bronzor’s kicking ass and Combee is the cutest thing to happen since Piplup. One thing that’s annoying about only playing Pokemon occasionally is that all the berries that I had planted die out. Oh well. However, I’ll be going away on a trip at the end of the month, which will, hopefully, give me ample opportunity to rebuild my berry hoard.

Finally, I made an attempt at Cave Story‘s Sacred Grounds (aka “Hell”) a few weeks ago. This required playing through the entire game again in order to unlock the place, and although the WiiWare version’s “easy” mode made this a snap, I messed up one of the requirements more than halfway through and had to start all over again. The second time around, I got the secret, “hardcore” version of the Last Cave and, after the endgame, was able to descend into the even more intimidating Sacred Grounds itself. I managed to make it all the way to the first form of Hell’s final boss before dying, and this, remember, was on easy. There’s no way I would’ve made it that far in normal mode. Anyway, after giving up, I looked up a speed run on YouTube (spoilers, of course). Braggadocious, of course, but more importantly, insane.

Coming soon, some reviews! That is, if I’m not sucked into more PC games this week…