The Life and Times of a Hero

As I did with Earthbound last year, I’m compelled to go in-depth with my Dragon Quest V: Hand of the Heavenly Bride review, so I’m splitting this into two sections. The first will discuss the game overall, spoiler-free. The second will go heavily into spoiler territory and talk about things I both liked and didn’t like with how the game progressed. Spoilers will be under a cut and clearly marked (at least, better marked than they were in the Earthbound review, cut notwithstanding). So, here we go.

Dragon Quest V is wonderful. There isn’t really much more to say about it than that. It takes the refined formula that characterizes the series and stitches to it a story that outshines and outclasses most other JRPG tales, along with a handful of unique features and engaging diversions. The Dragon Quest formula, for those who aren’t familiar with it, is a certain style of first-person turn-based fighting, combined with interesting dungeons, lively towns and castles, casino minigames, and a reasonable amount of grinding, all presented in a brightly-colored Akira Toriyama world set to a serene Koichi Sugiyama soundtrack. It’s a world with blue slimes with round eyes and goofy smiles, lamps that can turn day into night, and mini-medals sought after by an eccentric king. If you’re at all familiar with Dragon Quest, then you know what I’m talking about and should feel right at home.

One of the major features specific to Dragon Quest V is the ability to recruit monsters as party members. This isn’t as clear-cut as it sounds. Unlike in monster-collecting RPGs like Pokemon, the player doesn’t have any control over the recruiting process; there’s no special spells or items that can be used to convince them to join your side. Rather, at the end of battles, a monster might randomly show up and ask to join your party. This happens pretty rarely and, as one learns after obtaining the Big Book of Beasts, not all monsters are recruitable, and some are harder to enlist than others. All told, I don’t think I recruited much more than a dozen monsters, but that was okay, as I wound up with a pretty solid all-monster backup team by the time the final dungeon came around, including a Slime Knight that had been with me for a good majority of the game. 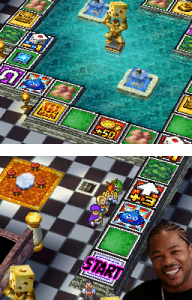 Another way in which Dragon Quest V differentiates itself is with its diversions. The usual casino games (slots, roulette, etc.) are present, as is the sidequest wherein mini-medals, which are scattered all over the world, can be exchanged for rare goodies, but there are some new things to do as well. One of my favorites is Treasures and Trapdoors, or T’n’T for short. T’n’T is a giant, life-size board game played with a die and a set number of turns; the spaces along the board contain anything from an additional turn or three to a random battle, a treasure chest to an inn, a dungeon entrance to a stat boost. It’s sort of like playing a scaled-down version of Dragon Quest within Dragon Quest. The prizes for winning a round of T’n’T are good, and later on, playing certain boards can be a great way to amass a lot of cash without having to dungeon-crawl in the traditional sense. Another I liked is the Knick-Knackatory, a museum where the “knick-knacks” that the hero collects on his journey can be displayed. I never did get all of the knickknacks, but I came pretty close, and it was neat to see the museum slowly fill up over time, both with exhibits and with visitors.

As for Dragon Quest V‘s story, like I said, I really do believe it is one of the best ever in a JRPG, and in large part, this is due to its structure and approach. For instance, while there is backstory, and a fair amount of it—this being the second part of the Zenithian Trilogy, the events of Dragon Quest IV are very vaguely alluded to, but there are other bits of history, specific to DQV, that factor in as well—there is no need for flashbacks on the part of the hero, as we see every important thing that happens in his life right then and there, in whatever the present happens to be at the time. From hereon in, I’ll call the “hero” Kiyoshi, as that’s what I named mine; like all Dragon Quest heroes, he is nameless until the player intervenes.

The game starts with Kiyoshi’s birth, and quickly jumps forward six years when he is wandering the world with his father, Pankraz. Who Pankraz and Kiyoshi are and what the former’s quest is are major plot points in the game, and ones that follow our hero through the years. We follow the six year-old on his adventures, and after another timeskip, see him again as a teenager, growing into a young man. He has more adventures, learns more about himself, and chooses a bride. The quest he embarks with his wife continues on from there, and his life, as all our lives do, grows larger and larger.

Major spoilers from this point on.

I believe this manner of handling the hero’s life made the high points higher and the low points lower. Getting to know the young, adventurous Kiyoshi before his father is killed before his eyes and he and a bratty prince are forced into slavery for ten years is a more affecting experience than merely being told about or shown the event in flashback. The same goes for a similar timeskip: the heartbreaking sequence after Kiyoshi and his wife (not long after the joys of becoming king and queen of Gotha and witnessing the birth of their children) are turned to stone and separated. Here, he becomes a lawn ornament for a wealthy family who is helpless, even as the family’s son is kidnapped. The seasons slowly pass until, one day, Kiyoshi’s own children, along with a family friend, come to rescue him. 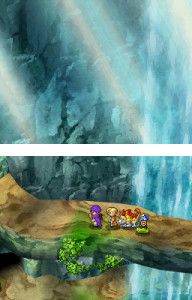 This following of the entire hero’s life also takes advantage of a multi-generational story angle. The true nature of the quest concerns the search for Kiyoshi’s mother. The lineage of the heroine whom I married, childhood friend Bianca, is subtly revealed. The legendary hero whom Pankraz was searching for turns out to be his grandson, Kiyoshi’s son. Dragon Quest V is, at its core, the story of a family and how they happened to become one, and save the world. To a lesser extent, it is also the story of their friends who help them along the way, most notably Pankraz’s pal Sancho, who becomes Kiyoshi’s pal and protector, and the wild-turned-tame sabrecat Saber, whose freedom was won as a result of Kiyoshi and Bianca’s first adventure together.

One major complaint I have concerns the handling of the Zenithian equipment, specifically the Zenithian Armour. In Dragon Quest IV, this “legendary equipment” was needed in order to progress through the story, and they play a role here as well. However, while the Zenithian Sword, Shield, and Helm appear during some very memorable story events, the Armour is in an easily-missed area in the finished Crocodopolis, a place which is only accessible after entering Zenithia itself. While the location of the Crocodopolis makes sense within the context of the story, it’s odd that the Zenithian Armor is treated less like a cornerstone of the entire quest and more like a hidden bonus item. It’s also odd that not a whole lot of people, including the Zenith Dragon himself, mentioned the Armour, which was the only piece of Zenithian equipment still unaccounted for by that point in the game. To be honest, I’m also annoyed that I overlooked this area—I rushed a little through the Crocodopolis compared to other dungeons, and never made a return trip, but I’m not sure I would’ve been able to find it even if I had been more patient—and didn’t learn about the Zenithian Armour’s presence there until after I beat the game. (There’s also the matter of the Shimmering Shield, one of the four bits of Ultimate Equipment for Kiyoshi, which is, unlike the others, only available in the postgame section, but that’s a lesser complaint.)

Another thing I want to note, though this is more of a wry observation than a complaint: that Legendary Hero son of mine who was destined to defeat the great evil and save the world? Since he had the best all-around healing and support magic, in the final battle, he didn’t get many hits in as he was too busy healing my party and casting protective spells like Insulate. Meanwhile, Kiyoshi’s wife—and the Legendary Hero’s mom—delivered the finishing blow.

Anyway, that’s all I have. Once again, Dragon Quest V is wonderful. You don’t have to have played Dragon Quest IV first to enjoy it, but it might help as an introduction to this whole Zenithia business, and especially if you’ve never played a game in the series before (it is also easier to find, not to mention a great game in its own right). It is one of the very finest traditional JRPGs you could ask for, and I absolutely, sincerely recommend it to all fans of the genre—hardcore and casual—and to newcomers as well.