A Pile of Braincrumbs Before I Go

Leaving on a trip tomorrow, and it’s going to be one of those rare times where I unplug for awhile. That said, I made sure that whatever I started playing in the past few weeks were things that I could beat before leaving. In the end, I played through four games and read a Let’s Play of Dare to Dream, an early effort by one Clifford Blezinski (thankfully, he’s improved since then).

That aside, here’s what I thought of those four games I played:

Even though my main gaming goal for the year is to beat as much of my MegaTen backlog as possible, I haven’t made much progress with that. After Persona 4, I didn’t play another SMT-related game until this one, which is a 3DS port-with-extras of the original Devil Survivor on DS. It’s also a strategy RPG, which is unusual for this franchise, but as I love the genre, I wasn’t going to complain. 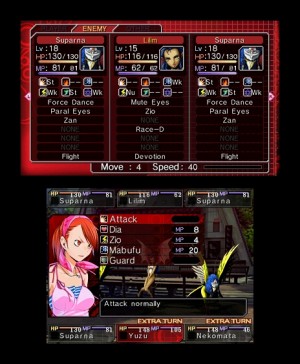 It was the SRPG elements, and the battle system in general, which proved to be the most fun part of the game. Characters move around on a grid and can attack and use special actions, but the twist here is that each of your party members can have a team of up to two demons tagging along with them, and initiating battle leads to a first-person turn-based affair that’s more typical of MegaTen. This mixing of traditional and strategy JRPG gameplay works really well, and is further augmented by robust customization options and demon recruitment and creation systems.

Despite this, the game is grindy on the normal difficulty, which wouldn’t be as bad if there were more than one or two “free battle” areas to level up in at a time. As for the story, it’s pretty good, though hardly original—much like The World Ends with You, the game takes place in Tokyo over a period of seven days, which is the time limit the main characters’ have in order to sort things out (it’s worth noting here that among Overclocked‘s new features are some unlockable “eighth day” scenarios, though I didn’t get one with the ending I chose). In other aspects, the plot is your standard boilerplate MegaTen, with a silent protagonist, characters with varied personal agendas, and multiple endings. Most of the time, it’s well-paced for a portable game, though the density of plot threads means that it can be easy to forget your place at times, which can lead to unintended (by you) consenquences.

The game is fully voiced (though the results are hit or miss), the music and graphics are decent… for the most part (I want to know what the hell is up with that strap on Haru’s dress), and the localized script is up to Atlus USA’s usual high standards. Strangely, there isn’t much use of 3D aside from the opening movie and demon fusing animations, but other than that, it looks great on my XL. As a MegaTen game, it’s a reasonably solid entry overall.

A Little Story in a Cave – Ikachan 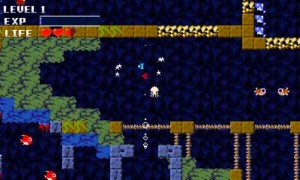 By the time I beat Devil Survivor Overclocked, there wasn’t enough time to start something similarly lengthy, so everything I’ve played since then has been much shorter. First up was Ikachan, a 3DS port of a pre-Cave Story PC game by Studio Pixel. It takes place in an underwater cavern, and the main character is a squid. As in Cave Story, there are snaking passages, cute little regular enemies, deadly red spikes to avoid, strange beings to talk to (barnacle/anemone people, in this case), useful items to collect, and an atmosphere that ably blends the unusual with the mundane.

The story, however, is much simpler, and so is the game itself. There is only one area—the gigantic cave where the tale takes place—and very few boss battles. For Cave Story fans, Ikachan is notable for being the game that Ironhead, a large fish with an, er, iron head, came from. Ikachan is also easier; none of the enemies are as taxing as, say, Monster X in Cave Story. It’s cute, very short, and worth a look if you have a spare hour or two. The original PC game is freeware (note: some spoilers in link), though the 3DS version adds some new features, including a subtle layered 3D effect.

I don’t normally play zombie games, but I do play platformers, and picked up Deadlight in a Steam sale awhile back. Unfortunately, my old Mac Pro couldn’t handle it, and so it was one of those games I shuttled off into my “Save for new compy” folder. As I now have said new compy, I’ve started digging into that folder. Sonic & SEGA All-Stars Racing was the acid test, and not long after playing through that, I found myself moving on to games like this one. 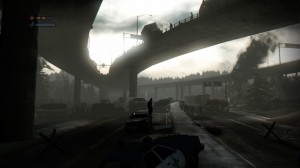 Deadlight takes place in early July 1986, in Seattle, in which it seems like pretty much the whole world has been overrun by zombies—sorry, “Shadows”—and what few humans are left in this one particular city try their best to survive. The main character is a scruffy middle-aged Canadian man (we know for sure he is Canadian because the game likes to remind us of this every so often, mostly through his diary entries and some comments on the items he finds during his travels) who is searching for his wife and daughter. He gets separated from his friends early on and is forced to make his way to a designated safe point on his own. This he does by running, jumping, climbing, walking, etc. all over the Seattle metro area in a linear fashion, occasionally solving puzzles and finding hidden areas. On a superficial level, at least, it’s pretty similar to Mark of the Ninja, but with much less stealth and a lot more zombies Shadows.

The game is thick with zombie genre cliches and sports at least a couple of frustrating sections in the third act, plus pausing is sometimes buggy, but otherwise it is generally well made (as unbelievable as some of it seems at times) and appropriately gritty and moody. It’s the sort of game that isn’t going to change the world, but does provide some fairly decent entertainment for a little while.

A Hungrier, Toothier Kirby – The Maw

I beat Deadlight quicker than I thought I would, and still needed something to play! To satiate this hunger, I turned to The Maw, which is, like Deadlight, a PC port of an XBLA game. This time, however, you play a small blue alien who befriends a small purple alien shortly before the ship on which you are both imprisoned crash-lands. The blue alien finds a handy laser lasso gauntlet thing, and accompanies the purple alien, a walking eyeball and mouth called Maw, on a journey to do… something. Though there are parts where they have to outwit their former captors, it’s never made very clear what the protagonists’ specific goal is. 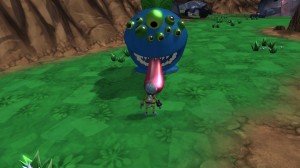 The Maw is a neat little piece of platforming goodness—the kind of lower-budgeted, but still polished, work you’d commonly see released on disk form throughout the PS2 era. The lasso gauntlet is the main character’s means of interacting with Maw and the various creatures and objects within the world they’ve crashed onto. Maw itself grows as it eats and, much like a certain famous pink puffball, can gain different appearances and abilities if it consumes certain creatures; for example, a large horned beetle enables Maw to do a ramming move, which can destroy boulders and surpass certain obstacles. There are only a handful of these moves, but the small number of them makes sense given the game’s brief length.

Unlike many other, older platformers, the challenge is dialed down a bit. There are no lives, and respawning takes you back pretty much to exactly the same spot you were at when you died (for example, structures that you had destroyed before will remain destroyed). This being the case, it makes me wonder why it’s been made possible to die to begin with. Although it lessens some frustration, it’s still a very odd design choice.

The version of The Maw that I played included all of the DLC levels, which were omitted scenes interspersed throughout the campaign. While this is a nifty use of DLC, for the most part, they stuck out like a sore thumb in that they tended to be longer and more intricate than the “regular” stages.

Aside from some camera issues when Maw gets to be on the big side, a soundtrack that’s sometimes too repetitive, and the aforementioned issues regarding the difficulty and DLC, there’s really nothing bad I can say about this game. It’s just long enough that it doesn’t wear out its welcome, it controls well, it’s stable, and it’s enjoyable. For a lot of games, I couldn’t ask for much more than that.