It’s been about three months since my last post, and much has happened in the meantime: something about gates on the Twitterverse and elsewhere, another fun trip to PAX Prime, and seeing a handful of highly anticipated games come out. I’ve played quite a few games to completion since then as well, including the outstanding DS dungeon crawler Shin Megami Tensei: Strange Journey, underdog (underhog?) platformer Sonic Unleashed, and the last two unplayed Guild games I had sitting on my 3DS, Attack of the Friday Monsters! and Crimson Shroud. All were good-to-excellent, but none of them cross the masterpiece threshold save for one game and its official expansions: Half-Life 2.

Yes, as with so many others, I’m really late to the party on this one. This November marks the tenth anniversary of Half-Life 2‘s release. Back in 2004, it won a staggering number of Game of the Year honors, well more than other notable releases of the time, including Katamari Damacy and World of WarCraft. Since then, it and its episodic expansions, Episode One and Episode Two, have left gamers wanting more, cracking numerologic jokes about Half-Life 3 and being frustrated over the long-delayed Episode Three. Now, I know for sure that all of the above is justifiable. 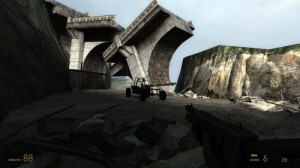 Firstly, there’s the superficial stuff: for a ten year old game, Half-Life 2 looks and sounds incredibly good. I said much the same thing about the original Half-Life, and it’s just as true for the sequel. It’s almost criminal that a game this old can feel this contemporary, and even with my blazingly fast desktop computer, the loading screens can still take a little while. Sure, some of the environment models look blocky, but they’re the only really strong indicator of the game’s true age. A great deal of credit for Half-Life 2‘s time-tested aesthetic goes out to Valve’s texture artists and sound designers, who rank alongside the likes of Blizzard’s as some of the best in the business.

Speaking of textures, they maintain the aesthetic that Valve had previously established for the series’ world. Although the action has shifted from the American Southwest to somewhere in Eastern Europe, the well-worn industrial trappings are still there. Rust lines the edges of barrels, wooden pallets and concrete foundations are weather-beaten, and paint quietly peels from neglected living room walls. The characters, too, have a certain worn quality about them as well, in ways both obvious and subtle. 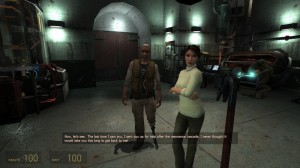 The rust-filled setting this time is City 17, an old-world urban center with a giant, unearthly tower plunked down in the middle. It is on a train headed to this place where player character Gordon Freeman is deposited by the “G-Man”, a suit with unknown motives and an unusual bearing. The opening credit sequence on board the train is but one of many callbacks to the original Half-Life, and others soon follow, including a pair of scientists from that older game, who now bear actual names, as well as Barney Calhoun, the security guard from the Blue Shift expansion pack. In the meantime, we are also informed about the Combine, the extradimensional invaders who conquered the Earth while Gordon was gone; get our first glimpse of Dr. Breen, the Black Mesa administrator turned leader of the oppressed city, who appears on giant viewscreens around town; and are formally introduced to Alyx Vance, the mechanically-inclined daughter of Eli, one of the aforementioned scientists.

Alyx is regularly touted as one of the best female game characters to date, which says a bit about how backward the representation of women in games is. Her engineering and combat skills aside, she is pretty normal: level-headed, compassionate, a little bit sarcastic. Whenever she is teamed up with Gordon, which happens infrequently in Half-Life 2 and more often in the Episodes, she doesn’t neatly fit the typical female sidekick role of guide or some other inflexible stereotype. Instead, she’s a genuine partner, who helps Gordon past obstacles just as often as he does for her. Together, they’re a well-balanced team, and much the same can be said of others who accompany Gordon throughout his adventures, from the nameless human and Vortigaunt rebels to Barney and the suitably monikered robot Dog.

Still, it seems Valve couldn’t resist shoving some sort of subtle romantic overture in there, as Eli and others occasionally inquire about Alyx and Gordon’s prospects together. At least Alyx, for her part, never brings such matters up to Gordon herself, leaving the whole situation vague. Similar romantic undercurrents are present in scenes featuring the game’s other major female character, a scientist named Judith Mossman who is more than she appears. Still, despite these minor instances of pandering, both Alyx and Judith have been interesting steps forward for female characterization in first-person shooters. 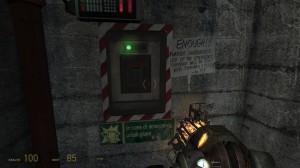 Speaking of which, the storytelling is handled in the same natural way as it was in the original Half-Life, with exposition and such presented to you by non-player characters and background details in-game, without ever interrupting the flow of the action for a static cutscene (and, thankfully, subtitles and closed-captioning are options this time). However, with a fair number of actual named characters this time comes a greater emphasis on plot and characterization. This is by no means a bad thing, of course, and lends Half-Life 2 and its follow-up episodes a depth that was lacking from their predecessors. One aspect of the storytelling which is a bit more faithful, style-wise, to Half-Life is the general tone; this is still an unpredictable world dealing with the consequences of scientific curiosity, but one with its little bits of dark humor well intact. For better or worse, this is also an unfinished story, with Episode Two closing with a dramatic cliffhanger and many, many questions left unanswered.

Anyway, enough about the finer trappings: this is a first-person shooter, and I haven’t talked about the shooting bits yet. The enemies are challenging and diverse enough while being rarely annoying and never out of place. In a similar vein, the weapons and ancillary controls (running, flashlight, etc.) are all reasonably satisfying for their respective purposes, with the shotgun and Antlion pheropods being two particular highlights. There’s also the famed Gravity Gun, the second tool-style weapon received in the game; the first is, of course, Gordon’s iconic crowbar. The Gravity Gun is the most dependable and versatile out of all the weapons, and is deceptively simple in operation: the left mouse button brings objects (up to a certain size) closer, while the right one pushes them away. Aside from its combat uses, the Gravity Gun is essential for solving many of the puzzles which quietly present themselves throughout Gordon’s adventures.

One area in which the controls falter a bit is in the driving sections, which are overly long in Half-Life 2 and thankfully few in the Episodes. Keeping consistent with the series’ level of immersion, these driving sections are in first-person view and have similar controls to those for walking around. This approach, while seeming sensible, leaves something to be desired, as it can be somewhat difficult to use mouselook (which doesn’t affect driving direction) and WASD controls (which does) simultaneously. Acceleration and braking are also somewhat tied in with the directional controls, which seems a little odd at first, but at least works better than turning does.

Half-Life was already an incredible game for its day, and one which has stood the test of time. For Half-Life 2 and its Episodes (especially the brutal and harrowing Episode Two) to surpass it is no mean feat. Even the bite-sized nugget of an expansion, the excised-level-turned-playable-tech-demo Lost Coast, is an outstanding little production that does its franchise proud. With better driving controls and less of a reliance on romance as a minor plot crutch, this whole package would’ve been perfect; however, what masterpiece is truly without flaw? Half-Life 2 expands on Half-Life‘s promise that subtlety and intense action needn’t be strangers, reminds us that silent protagonists are worthy avatars, and, in an extraordinary world, revels in little details and moments of normalcy.