For the past week, I’ve been alternately too tired or too busy to play games. Right now I’m both, since my new desktop machine is due to arrive tomorrow and I still haven’t finished backing up the old one. I’m really looking forward to setting everything up once it gets here, but it’ll also be a little while before I settle into a normal routine again. Oh, and I still have some sleep to catch up on.

After beating Steins;Gate and a trip to see family, I settled back down in front of Steam and started up Frozen Synapse. However, it was more difficult than I had expected, plus the campaign’s story is a jargon-filled stew that, at its very core, isn’t novel enough to justify its complexity. Therefore, I put it aside and booted up Half-Life. 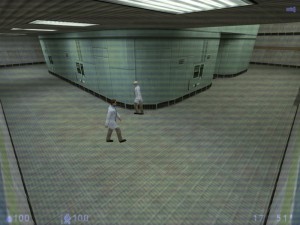 Protagonist Gordon Freeman is, like S;G‘s Okabe, a physicist involved with fantastical research, but that’s where their similarities end. Gordon is a professional as opposed to a mere student, talks way less (as in, not at all), and, I imagine, plays lots of Quake when he’s not working. The nature of his research at Black Mesa is barely explained and, after something goes wrong with the day’s experiment and the game begins in earnest, you’re only ever given as much information as you need. The narrative flows naturally in this way and, aside from the loading screens and occasional bug, so does the game itself. Half-Life is wonderfully designed (aside from the aforementioned bugs, plus the lack of a subtitle option) and doesn’t feel as old as it is; I was afraid that the graphics would be blockier and jaggier than they actually were. It’s obvious as to why it’s held in such high esteem.

Not long after wrapping up Gordon’s adventures (for now), I dug into two expansion packs, Blue Shift and Opposing Force, which has you play as Black Mesa security guard Barney Calhoun and US Marine Corporal Adrian Shepard, respectively. Even though it was made later, I played Blue Shift first; it was short and had a limited selection of weapons, but expanded on Half-Life‘s dry and dark humor, making for a light but yummy snack of a game. Opposing Force was meatier and the most difficult of the three that I played; it had some interesting new weapons and enemies, and both added to the original game’s story and echoed it in certain ways, or at least more than Blue Shift did. By the time I had wrapped it up, I was ready to take another lengthy break from first-person shooters. I’ve been meaning to start a JRPG of some sort (either a MegaTen game or Rune Factory 4), but have run into the whole tired/busy problem. 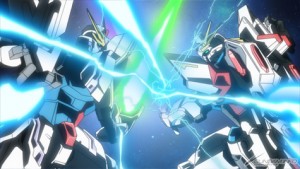 Instead of games, I’ve been spending my leisure time reading and, along with bitprophet, finally finishing up Gundam Build Fighters, the most recent anime in one of Japan’s biggest cash cow franchises. The premise of this show is even more commercialized than usual: instead of a story of war, politics, and giant mecha, here we have a lively tale of kids battling with Gundam plastic models (Gunpla) on special playfields where they’re brought to life. This type of story is not new to anime—it most reminded me of CLAMP’s Angelic Layer, which features battles between user-customized dolls instead of robots—but it’s new(ish) to Gundam, and was pulled off rather well. Once again, the scientific stuff—in this case, the technology behind the “Gunpla Battle” game—is barely touched upon; for most of the series, pretty much all we know is that the mysterious “Plavsky particles” make it possible. Rather, the important parts of the series are the characters, Gundam models, and the international tournament in which they all come together.

The core story involves Sei Iori, a boy who loves Gunpla and is a talented builder of them, but isn’t very good when it comes to the fighting aspect. One fateful day, he meets Reiji, a strange kid who, as it turns out, is very talented at Gunpla battling. The two of them team up with the goal of making it to the Gunpla Battle World Tournament. It’s worth noting that there was an earlier OAV series with a similar Gunpla-based focus, but Gundam Build Fighters is a wholly new story.

All of the characters, as cliched as they can act at times, are fun or at least interesting, and they’re lovingly drawn, with some of the best gag expressions I’ve ever seen in an anime series. The Gunpla battles themselves have a stunning level of care put into them, and are generally a treat to watch. As for the story, it’s predictable (and is basically one big commercial for real-life Gunpla), but this is one series where the journey is just as important—or perhaps moreso—than the destination. Some previous experience with the Gundam franchise is recommended, as not only are there tons of little bits of series fanservice, but it is also nothing like the other, more serious shows. Still, it’s a quality production and a lot of fun, and I hope it doesn’t ultimately get overlooked in favor of whatever shows are super-hot at the moment. If you’re in the US or Canada and want to check it out, the entire series is legally available on YouTube, fully subtitled in English.