Of Backlogs and Buccaneers

It was a long time in coming, but I finally, finally managed to play Level-5’s space pirate action RPG Rogue Galaxy. I don’t know exactly how long I’d had it sitting around, but its presence there dates back from at least April 2008. After roughly a month and a half of playing, the Rogue Galaxy Era of my backlog officially ended on November 7, 2011 after watching the credits roll. Looking at my “Currently playing/in my backlog” list from that post, it seems that Persona 3 (or rather, Persona 3 FES, which I had acquired since then) should be my next major priority.

However, let’s not concern ourselves with that right now; this post is about Rogue Galaxy. Ah, Rogue Galaxy! I can still remember how excited I was about this game before it launched. The splendidly quirky Dark Cloud 2 had been my first introduction to a small development house called Level-5, and from that point on, I was immediately interested in anything they produced. However, since that time, I had played their masterful collaborations with Square Enix, Dragon Quest VIII and IX, and none of their other titles. The first Dark Cloud and Professor Layton games are currently languishing in my backlog, but Rogue Galaxy had been in the Pile of Shame longer than either of them. This is not the case any more, and now, I feel obliged tell you about this game which took me way too long to get around to playing. 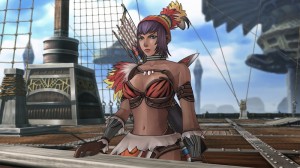 Much like Dark Cloud 2, Rogue Galaxy is a beautifully cel-shaded action RPG (with even more beautifully cel-shaded FMVs). The story follows Jaster Rogue, a young man on a desert planet who dreams of going up into space. One day, his dreams come true when a pair of crew members serving under the pirate captain Dorgengoa mistake Jaster for one of the galaxy’s top bounty hunters and bring the young man aboard their ship. What follows is an adventure filled with planet-hopping, interesting characters, and gobs of clichés. Think Treasure Planet with touches of every JRPG ever, told through cutscenes as long as Xenosaga, Episode I‘s, but without the sluggish pacing. Finally, I’d like to mention one handy feature in relation to the plot: a brief recap of recent events that pops up when starting a new game or continuing from a save. 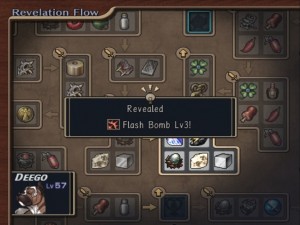 The game is jam-packed with things to do. In addition to the main quest, there are a handful of sidequests and optional goals, including bounties to hunt down, a multi-tiered insect fighting tournament, and a complex factory-based item creation system that’s reminiscent of the town-rebuilding aspects of the Dark Cloud series. Speaking of items, there are an overwhelming number of them—not just in the form of weapons and healing medicines, but shields, foods, metals, gems, machines, circuitry, random objects, event-specific things, a talking purple frog that can merge two weapons into one, and a handful of alternate outfits for your party members. These items are used in some of the optional activities I described above, as well as the Revelation Flow, charts (specialized for each character) from which new abilities and augmentations can be unlocked. Then, there’s the separate section for special items—three types of them, to be exact. This is a game that loves its stuff. 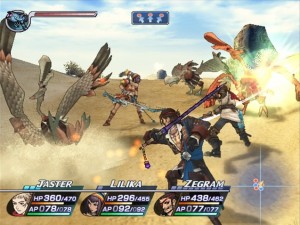 At the core of all this is some very good combat made use of in environments that are pretty but relatively monotonous, and all far larger than they need to be. The party-based battle system most closely resembles that of Kingdom Hearts; there are no cutaways to “battle screens”—instead, enemies simply appear on the field—and one character is directly controlled by the player while the other two are handled by AI. However, here the action can be paused at any time to access party members’ menus for special commands, and AI-controlled members will often ask for advice on which attack or item to use. All of the special moves, by the way, are accompanied by brief cutscenes, which are thankfully skippable, though not right away. Each character also has a set of “Burning Strike” attacks, which relies on a filling up a meter and timed button presses, as well as combo moves that recall the Double and Triple Techs from Chrono Trigger.

It’s an engaging, well-executed system… for the most part. Its major weakness comes about in the rare instances when characters find themselves in one-on-one battles. Although Rogue Galaxy tends to err on the easy side, once party strength is cut down by a third, you’re facing the toughest fights in the game. It’s easy to blow through a dozen or more healing potions during one of these battles, to say nothing of dying and getting “Game Over”.

As for the environments, as previously implied, they are generally gorgeous, but also wear out their welcome fairly quickly, with little variety within single areas, and wide, lengthy pathways that take a long time to get through. Backtracking to unlock special chests, defeat bounties, or seek out any other extra content is often tedious, to say nothing of going through the game’s dungeons the first time around. The save points, which double as teleporters, do help to lessen this tedium. Unfortunately, I wish I could say the same about the map system, which only allows for views of many different floors at once at save points, and can be unreliable once the ability to see all unlocked chests on a given planet is accessed.

The music is inoffensive and only occasionally ear-wormy. The regular battle theme in particular has a starting similarity to the one in a certain other game about pirates in flying ships. As for the voice acting and sound effects, much like the music, they get the job done reasonably well. There’s nothing truly outstanding about the sound design in general, but nor is there anything bad.

I’m sure I’m forgetting something; Rogue Galaxy has so much going on that it would be hard not to. It’s a beautiful, ambitious title filled with both great and frivolous ideas, and arguably one of the better Sony-published JRPGs of the PS2 era. However, it lacks some of the coherence and originality of the best that console has to offer. I hesitate to call Rogue Galaxy average—since it isn’t—but it’s also not the masterpiece it had the potential to be. That said, it is still a very good game, and although it took me ages to get around to playing it, I’m glad to have ultimately done so.