Like many Sonic fans, I had a curious eye on this year’s Sonic Generations. When the reviews started to hit, many of them were positive, calling it the best Sonic in a long time. However, Tailsnake’s comment at Ars Technica stood out to me:

I’m not sure why the gaming media keeps acting like Sonic Colors didn’t exist. Sonic Generations is the Sonic Colors engine in HD on redesigned classic levels. Colors didn’t have the nostalgia factor, but it played just as well as Generations and didn’t have any annoying sidekicks either. Colors was the Sonic gameplay fans were waiting for, Generations is just Sega taking that engine HD (which is a great thing for fans, I just wanted to give Colors the credit it deserves).

At the time I was playing Sonic Colors—I still am, actually—and this comment resonated with me. Colors, not Generations, should hold the title for “best new console Sonic in years”. I haven’t bought Generations yet, but the Green Hill Zone-focused demo confirmed that the “modern Sonic” sections are indeed simply HD versions of the Colors formula. 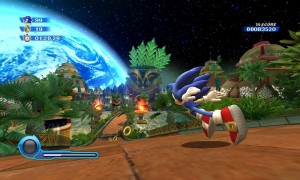 Why was Sonic Colors—arguably the best 3D Sonic ever made at the time of its release—so sorely overlooked by Generations reviewers? I feel this is mainly due to Colors‘ status as Wii and DS exclusives, as opposed to Generations‘ more hardcore-friendly presence on 360 and PS3, to say nothing of the nostalgia factor hardwired into the latter game. As with many quality third-party Wii games, it’s a shame that Colors hasn’t been played by more enthusiast gamers, because it’s both a great platformer and a fantastic step forward for the long-troubled Sonic series.

The plot of Colors is simple, much like those of the Sonic games of old: Dr. Eggman has opened a theme park in outer space. Sonic and Tails, suspecting an ulterior motive, head to this park to investigate. The cutscenes and especially the dialogue are cheesy, but they’re also refreshingly wholesome, and with few additional characters to complicate things.

On a similar note, the only playable character is Sonic, though robotic Sonics and Miis can be used in an optional area. Sonic controls much like he always has, with breakneck speed and a strong sense of inertia. The major new feature this time around are the Wisps, diminutive aliens that can be collected for speed boosts or special abilities. Said abilities make up for the lack of other playable characters; for instance, the green Wisp allows Sonic to hover like Tails, and the pink one to climb walls, a la Knuckles. These powers can only be used for a limited time, though run into enough refills on the way, and the player can keep using them for as long as necessary. 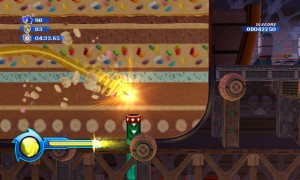 In addition to the Wisps, the most striking thing about Colors are the environments. Standard platformer tropes are reimagined to fit the world—for instance, the requisite water level is a Japanese-themed aquarium—or ignored altogether. There are layer cake mountains, checkered lanes of light, and roller coasters that weave between asteroids. These levels are traversed from both front-facing and side-scrolling perspectives, shifting as necessary, and with none of the cameras-from-hell that mar certain other 3D Sonics. They also contain multiple paths, and with new kinds of Wisps unlockable in each area, many of them encourage repeat plays.

With the game’s outer space theme and some of its more eye-popping moments—not to mention the occasional shift in gravity and bounce between asteroids—Sonic Colors has been compared to Super Mario Galaxy, but they are alike only in superficial ways. Sonic is and has always been a very different character from Mario, and the levels in both characters’ platformers reflect that, including Colors. The thirty-plus Colors levels are built for speed and have plenty of springs, loops, and boosters, to say nothing of enemies placed in just the right spot to make you drop all your rings. Colors, then, does not come from the Super Mario Galaxy school of level design so much as that of classic Sonic; it is a well-done, modern take on a classic formula.

However, Sonic being Sonic, there are some frustrating bits. For some gimmicks, particularly the giant lollipops in Sweet Mountain and the special multi-jump sections, the timing is stopwatch-tight, and can require extreme precision to use successfully. The placement of at least one mid-level marker—from which Sonic can respawn, as long as there are lives available—is lousy in such a way that it’s preferable to simply start the entire level over again should the player die. It is difficult in spots where it doesn’t need to be, but in a way, this is just another affirmation that it’s a Sonic game.

Still, it’s a gorgeous game, with an outstanding and varied soundtrack and the type of zippy, interesting gameplay that one would want from a Sonic. Though I still have a ways to go until the end, I do plan on continuing with Sonic Colors in the new year, and I hope that future console Sonic games—not just Generations—build upon its template.