Our Wii has been getting a decent amount of playing time these past few months. First there was Chrono Trigger‘s much celebrated arrival on Virtual Console. At the time of its purchase, I also got Toki Tori, an environmental puzzler I’d been meaning to pick up for awhile. Later on, Kirby’s Epic Yarn gave me a nice respite from JRPGs, and not too long afterward, Shiren the Wanderer marked the end of my break.

I didn’t play Chrono Trigger, seeing as how my most recent playthrough was only just last year, via the DS port. Instead, my husband dove into this personal favorite of both of ours (ironically enough, we had named our Wii “Marle” when we had first gotten it). It is, like other Virtual Console offerings, the original game with nothing else added on, warts and all. Therefore, instead of the rich, fleshed-out DS localization, the original Ted Woolsey script is in full effect here. I have no problem with these old Woolsey localizations; the rushed Secret of Mana notwithstanding, he did a bang-up job given the restrictions he had to work with. The G-rated references to “juice” and “lemonade” in bar scenes are pretty silly to our adult selves, though. Localization aside, one interesting thing my husband pointed out in his playthrough was how similar the boss battles are in terms of the number of targets, how they act, and how they must be handled. This lack of diversity is one of the game’s weaker points, and only obvious to us now.

Oh, and before I forget, Chrono Trigger looks magnificent on an HDTV, especially those huge boss sprites. Not to mention the ending which was, this time around, one that neither of us had ever seen before. It was a fun playthrough to watch, and we even learned some new tricks; thanks to RPG Classics’ comprehensive Chrono Trigger shrine for those. 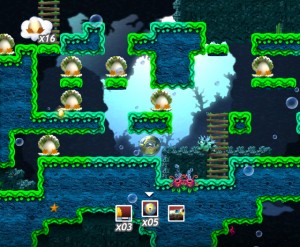 While he was playing Chrono Trigger, I started Toki Tori, and alternated between that and Final Fantasy Tactics A2 in my regular game-playing. Toki Tori is a remake of a Game Boy Color title; it has the same puzzles, apparently, but all new graphics and control options. The goal of the game, a 2D puzzler starring a squat yellow bird, is to collect all the eggs in each stage. There isn’t a time limit, but the bird can’t jump, plus there are restrictions on special moves and items. It’s possible to beat some stages with items to spare, but most of the time, I found myself coming up with solutions that neatly used everything at my disposal. The difficulty ramps up a bit in the final set of stages, which take place underwater and includes a new, albeit limited, floating action.

The WiiWare version favors the Wiimote, with not too much prompt-wise in either the documentation or the game itself for those of us who prefer the Classic Controller. Also, with its forty stages (not including tutorials), it feels shorter than it should be for a game of this type. Still, despite these quibbles, not to mention a rather… unexpected ending, Toki Tori is fun and worth checking out for puzzle fans. 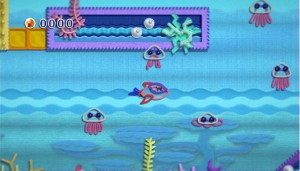 Kirby’s Epic Yarn was the next game to keep the Wii busy. Although I haven’t played the entire series, I have loved Kirby games since the very first one on the original Game Boy. This particular entry might just be the best one of all. Many Kirby hallmarks are present—capturing and using enemies as projectiles, tons of collectables, and an optional co-op mode for starters—but Kirby cannot fly (under normal circumstances), his more elaborate transformations are context-sensitive, and there are no lives, just ways to lose a ton of beads. These differences are just that—differences—and in no way lessen the “Kirbyness” of the game. In general, this is a tightly-designed Kirby with many inspired implementations of its fabric-based theme and one of the best soundtracks ever recorded for a platformer. Only the final boss battle, which could’ve been bigger and better, disappointed, and even then only a little. Currently, even though I’ve beaten it, there’s still tons of doodads to collect (most of which can be used to decorate “Kirby’s Pad” in the hub world), minigames to tackle, and high scores to beat. I expect to be playing this, on and off, for some time yet.

Finally, there’s Shiren the Wanderer, which I came to neglect FFTA2 in favor of. As in the DS port of the original Shiren, we’re in the shoes of the titular silent protagonist, who has come to a strange new land chasing legends and treasure. This time around, his party members are old colleagues, one of which is with you from the beginning. These party members can also be directed to do certain actions, or even controlled individually. Also different this time is how the dungeons are presented. Instead of having to go through the entire thing in one straight line (with breaks along the way in the form of towns), multi-level dungeons are given to you in chunks with as few as three floors and as many as twenty-five, and typically with a brief boss fight at the end. Upon completing most of these, Shiren and his friends not only get to keep their money and items, but their levels as well. If you die, however, you will have all of your non-stored stuff taken away (in Normal mode, anyway) and your levels reset to what they were before you entered that dungeon.

The story this time around is a bit more complicated, not to mention convoluted, with a legendary mansion and mysterious girl as its centerpieces. It all made sense by the end—well, most of it—but the story is mere window dressing for the randomly-generated and sometimes devilish dungeons. As for the other trappings, the music is decent and the graphics are sometimes ugly, but generally okay. This goes for the animation as well, though the slidiness of the characters’ (especially the ferret Koppa’s) walks in non-dungeon areas can be distracting.

That’s it for the Wii games for awhile. Since this Wii binge started, Final Fantasy III (aka FFVI) came out on Virtual Console (on my birthday, no less!) and was promptly purchased, though I have no idea when either of us are going to start it. I also have a few disk-based Wii and Gamecube titles in my backlog. However, the almost-beaten FFTA2 has been neglected for some time now and there’s a decently-sized pile of games for other systems still to play. Time to get crackin’.