The Land of Auto-Attacking and Assholes

It took several months—nearly half a year, actually—to get through Shin Megami Tensei: Nocturne start to finish. While this can be largely attributed to real-life factors (namely, moving to and resettling on the opposite side of the contiguous United States), there’s still the matter of the game itself. After all, during that same timeframe, I beat one game, started and beat two others, and started and logged over ninety hours into a fourth. Why was I dragging my heels with Nocturne specifically? 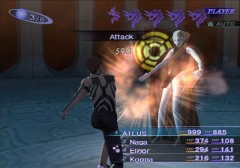 The game itself certainly had something to do with it. Nocturne is a slog at times, made all the more dull by overly simplistic dungeons for most of the game, a peculiar enemy distribution setup, and the auto attack feature. The bare-bones story—Tokyo is destroyed during a ritual, and a new world is going to be born from its ruins—doesn’t help much either, nor does the fact that a good portion of the game’s small cast is made up of bastards. Meanwhile, the NPC human spirits floating around are largely blazé about the horror that has befallen their city; one would think there’d be a bit more panic, or a sense of dread, rather than your typical NPC banter on what various important characters are up to these days. On the other hand, the NPC demons behave in a somewhat more believable manner, given the context.

The meat of the gameplay revolves around the battle and demon recruitment/fusion systems. The turn-based battle system is the same as the one in the later, and superior, Digital Devil Saga games, complete with its potential for unfairness. However, it also shares its auto battle option, which I used as frequently in Nocturne as I did sparingly in DDS. Thanks to an uneven demon distribution in a handful of locations—resulting in some low-level enemies regularly showing up in what should be higher-level areas—I found myself pressing the Triangle button quite often, in order to get the stupidly easy battles over and done with. However, I turned on Auto Mode in more evenly matched bouts as well, the faster to grind my way through dungeons that were, more often than not, the same three corridors (or even worse, the same one or two tiles) over and over again.

As for demon recruitment and fusion, it is a neat idea, but the system is set up to force the player to constantly “upgrade” to better demons. How this is accomplished is simple: all the game’s demons level slower than the main character. Thusly, unlike other RPGs with monster recruitment elements, you cannot develop a fondness for any particular demon, lest you be left behind. This, I believe, is overlooking a crucial element in what makes a good monster recruitment system. Demons are not companions, but mere weapons; they are utterly disposable, and must constantly be replaced with (or fused into) something better. 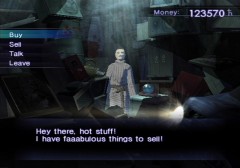 The smaller touches sprinkled throughout the game aren’t much better. There is a peaceful race of beings in the game, the Manikins, who are all right for the most part, but the vast majority of the Manikin shopkeepers are gay stereotypes who give the Jamaican accent of Digital Devil Saga‘s Cielo a run for its eyeroll-inducing money. A neat puzzle-based minigame is marred by its length and the lack of a way of quitting without saving your progress. There is an optional area called the Labyrinth of Amala, but by the point in the game where I could first access it, I had already decided that I didn’t want to run around even more boring dungeons when I didn’t have to. Devil May Cry star Dante appears in the game, but I only saw him once, and I wasn’t compelled to go looking for him again. As for the aesthetics, the graphics are typical of an early PS2 game, if more washed out, and the music is nothing special.

So in short, I found Shin Megami Tensei: Nocturne mediocre and dry. That said, I don’t understand the love that Nocturne commands from many gamers on the Internet. Perhaps it garners such affection because it was the first main-series MegaTen game to be localized in English and contained themes and imagery unlike any other JRPG previously released in the West. Maybe it’s that an M-rated JRPG was unique in 2004—hell, it’s still a novelty to this day—and the Nocturne world has plenty of dark imagery to back up that ESRB designation, not to mention swear words and, it could be said, the aforementioned gay stereotypes, too. Many tout the deep demon fusion system, which is the best thing Nocturne has going for it, but this is not as interesting or enjoyable as similar party management features in other, better games (Pokemon comes to mind, as does Disgaea).

Whatever it is, I don’t think Nocturne has held up very well over the years, and I’m unsure if I would’ve liked it even back when it was first released. While appearing to be polished, in reality it’s rough around the edges, not to mention flawed, and lacks any sort of charisma to make up for its deficiencies. It wasn’t so bad or boring that I quit halfway through, but neither was I driven to find out what happens next in the story, or to see the next dungeon or set of enemies. Nocturne is a game that is the true definition of average.