The busy holiday season is upon us, and over the past couple of weeks, I have bought half a dozen games—not as gifts, but for myself. So far, I’ve played two of these, and have also beaten one of my older backlogged titles. Instead of doing entire posts for these games, which I was strongly considering for two of them, here are some capsule reviews which hopefully cover the core essence of each title.

In Which Chopin is a Bishie Who Dreams he’s in a JRPG: Eternal Sonata

What would the real Chopin have thought of Eternal Sonata?

I have a soft spot for games from early on in a console’s life. They’re an interesting glimpse into what developers were thinking back then in regards to a new platform. What are their priorities? How are graphics approached? What holdovers from the previous gen are apparent?

Eternal Sonata is one such game. It was the first major third-party JRPG on the Xbox 360, greeted with much fanfare by followers of the genre. However, it might also be seen as a sign of things to come, as JRPGs have yet to really find their footing on the high-definition consoles (meanwhile, handheld JRPGs are going through what might be termed a golden age, but that’s a topic for another time).

As one would expect from a game inspired by a composer, Eternal Sonata is musically lush, and the voice acting ranks up there with the Tales series in terms of quality. The anime-styled graphics are drop-dead gorgeous, though the animation is merely decent and the environments are more constrained and linear than you would expect. Eternal Sonata also features an engaging battle system that meshes turn-based and action gameplay, with a light and shadow component for special moves that is wholly dependent on the environment. Blocking and counterattacking moves are available, but these require extremely precise timing to pull off, and thus leave much to be desired. One of the characters also has the ability to take photos during battle, but the only thing that this feature is useful for is in amassing large amounts of money (photos can be sold at shops), and feels like a novelty at best, and a wasted opportunity (on the developers’ part) at worst.

Ostensibly, the story is about a dream that famed composer Frederic Chopin has while on his deathbed, and his questioning of this dream’s very nature. However, it is also the story of the heroine, Polka, a terminally ill teenage girl with magical powers. There are a few things in the story that don’t make sense, but thanks to good pacing and solid (if cliched at times) characterization, the game progresses in such a way as to lead one to believe that all will be answered by the end. However, in terms of plotting, the final chapter is a mess, and the ending is long, pretentious, and only led to more questions. The final boss, though startling at first, made sense; unfortunately, its abrupt emergence matched the haphazard tone of the entire ending.

There’s an Opera out on the Turnpike: Audiosurf 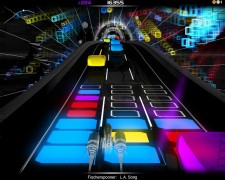 Screenshots don't do this game justice.

I have only been playing the PC game Audiosurf for a little under a week, and already, it’s my favorite game out of those that I’ve played this year. In fact, I was ready to post about this under Game Love, not Reviews; declare it the greatest music game of all time; and make room for it in my Holy Trifecta of Puzzle Games (Panel de Pon, Puyo Puyo, and Tetris). I don’t know if “quadfecta” is a real word, though.

Audiosurf, like many ingenious works, is simple in both form and function. Essentially, it is what would happen if you took an audio visualizer and mixed it with a match-three puzzle game. Plug in any audio file, and as long as it’s in a supported format, Audiosurf will generate a track out of it, complete with peaks, valleys, and lots of little colored pieces to collect for mad points. There are a handful of different characters to choose from, including a few that allow for two-player games. The Mono characters are the most basic of them all, and a good place to start for beginners; the colored blocks are all the same, and all one has to worry about is dodging the useless grey ones. When playing as one of the others, multiple colored pieces show up on the field at the same time, along with power-ups, and things really start to get hectic.

The graphics settings are quite flexible, plus a handful of optional sound effects are available. There’s also a set of achievements, but what really adds to the fun are the online leaderboards; there’s ones for each individual song that’s played with the game. Pick an obscure enough song and you could be the global champion at it, but of course, the real competition lies in the better-known stuff.

One of the most surprising things about Audiosurf is that it’s making me a better listener. Playing a track in the game, I find myself paying more attention to lyrics, instrumentation, and BPM. Regarding that last thing, some songs, like Michael Jackson’s “Wanna be Startin’ Somethin'” sound slower to me in Audiosurf than they do normally.

All in all, despite an interface that isn’t the most aesthetically pleasing thing ever, plus a tutorial mode that’s rough around the edges, this is an incredible game and a must-have for music lovers. By the way, I’m R. Kasahara on the official site, and if you have any doubts about Audiosurf, go see it in motion. 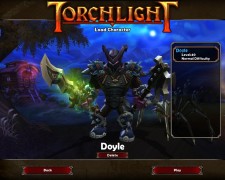 Here's what my Destroyer and his dog looked by the end of the story.

This is the most recent RPG I beat, and the first WRPG I’ve ever gotten to the end of. Torchlight, available for Windows and Mac OS X, is often described as a Diablo clone, but it’s one whose pedigree includes former staffers at Diablo home Blizzard North. Naturally, Torchlight has some of that Blizzard Touch™ about it, without the full-on robustness of that studio’s regular output. This lack of depth isn’t really a problem, though, since it’s a quality game made on a small scale by a small studio, and a good value at its full price of $20.

The story in Torchlight is pretty bare-bones. There’s mysterious happenings in the mines just outside of the town of Torchlight. You’re an adventurer who has come to town, and soon you find yourself teaming up with a woman named Syl in an effort to unravel the mine’s mysteries. It’s not a particularly deep story, but it gets the job done, and features some challenging moments and a tidy conclusion.

What largely kept me playing were the clean, World of WarCraft-style graphics and the satisfying loot grind. I also liked going in knowing that it was a short game—I like Diablo-esque RPGs but find many of them too long and too big. Oddly enough, in the end, the one game that Torchlight reminded me of most was Mystery Dungeon: Shiren the Wanderer. Shiren is turn-based and a roguelike, but other than that, there’s not much else separating the two: dungeon floors that were just the right size, item limits that were reasonable, the aforementioned story and loot points, the helper character concept, good graphics and music, and above all, plenty of fun to be had. Besides, if you want to play Torchlight in a more hardcore manner, there’s always the harder difficulty settings and permanent death option.