My Christmas break was longer than expected, thanks to the bad weather, but I’m back home now and catching up on crucial tasks, like changing the look of my Backloggery. While I was away, I finally became the Champion in Pokemon Platinum, started and beat the iPad version of Plants vs. Zombies, picked up a couple of PS2 games in decent condition at Gamestop of all places (a new Sakura Wars: So Long, My Love—it was the last copy and had a beat-up outer box, but the game case itself is sealed— and a used Baroque), got a DS game on sale at Best Buy (Picross 3D), and started Rune Factory 3 and the aforementioned Picross 3D. Upon returning home, yet another new game was added to the pile: Professor Layton and the Curious Village, a Christmas present that I wasn’t able to open until last night. There are other late gifts, but I’m not sure any games will be among them; this might be a good thing, given the current state of my backlog. 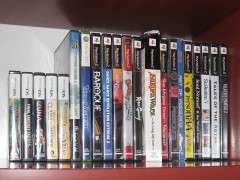 When I wrote last January’s backlog report, twenty-two game cases stood on my desk shelf. Counting Metroid Prime Trilogy as three distinct titles, this meant a total of twenty-five games. This year, there are twenty cases and twenty-one titles—World of Goo is currently sitting, unplayed, on one of my hard drives—but the number of RPGs is as unwieldy as ever. And yes, I still haven’t played Rogue Galaxy.

Speaking of which, there were three other 2009 must plays that I didn’t get around to: Nocturne, Persona 3 FES, and Tales of the Abyss. I did play the others, and, save for Chrono Cross, greatly enjoyed each one of them.

Here are my must-play games for 2010, in no particular order:
• Rogue Galaxy – Because, seriously, this is starting to get ridiculous.
• Dance Dance Revolution Extreme 2 – Might start this one later in the week, actually.
• Final Fantasy Tactics A2 – It’s been awhile since I’ve dug into a tactical RPG.
• Might & Magic: Clash of Heroes – Like FFTA2, a game I had intended to play last year.
• Shin Megami Tensei: Nocturne
• Ratchet and Clank
• Izuna: Legend of the Unemployed Ninja
• World of Goo
• Professor Layton and the Curious Village

How many of them will I get through, or even just start? Stay tuned.

My annual roundup, where I post brief impressions of all the games I played in the past year will be up shortly. Also, I will start keeping my annual Beaten Games tabs here from now on (I’ve got a post at the CAG forums’ current Completed Games thread I might use, too). As for the old tabs, they will be migrated here along with most all of my other game-related posts from LiveJournal; having seen this past year how ad-heavy that site has gotten, I feel this would be for the best. Anyway, more to come…