The Quarterly (Plus a Week and a Half) Progress Report

I’ve been playing a lot these past few weeks. First off, there was the WiiWare version of Cave Story, which I started the day it came out, and beat the week after PAX East. Save for the uneven “new” soundtrack and sound mix, it’s much the same as the freeware version, which is to say fantastic. I did a straight playthrough of the game, pretty much identical to my first one, save that this time I went after the Spur, a crazy awesome weapon. I want to replay it again sometime soon for certain secrets that I missed, mainly the ones that will unlock “Hell”.

Another game I’ve beaten recently, albeit one that I’ve been playing for much longer, was Rune Factory Frontier, the first and only non-handheld entry in the Rune Factory series, and also one devoid of any Harvest Moon branding, at least in its English-translated form (doubtless because the publisher on this one is Marvelous/XSEED instead of Natsume). Frontier is a direct continuation of the original Rune Factory, and is as deep, engrossing, and flawed as its DS predecessors. 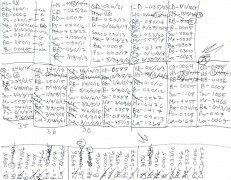 Here's some of my Runey notes. Really.

The major flaws this time around come courtesy of the Runey system. Unlike previous games, where runes can be collected to replenish action points both on the farm and in dungeons, said runes are dungeon-only. On the main character’s homestead—and in the surrounding town—live Runeys, color-coded creatures whose presence determines how fast and well your crops grow. Redistributing Runeys from area to area for good results is a finicky bit of business. First off, although Runeys have a set food chain, and certain types like certain areas more than others, it’s difficult to figure out how it all works; from day to day, some Runeys will decline or die off for no apparent reason, while others multiply. Secondly, there are only two ways to check the Runey level for the entire town, one of which is by talking to a specific person, and the other is by looking at a certain device in a fixed location. It would’ve been much more convenient to have an item in order to look up Runey levels whenever I wanted to, but such is not the case. That being said, I wound up keeping a pen and paper close by whenever I checked on Runeys, which was roughly every few (in-game) days at times.

Runeys—and constant loading screens—notwithstanding, this is the best Rune Factory yet. It feels like it moves at a slightly slower pace even though the actual in-game clock is the same (where one minute is equal to one real-life second), probably because it can be tough to figure out how to trigger the next round of story events, but these sorts of games were never meant to be rushed through. The farming, dungeon crawling, crafting, cooking, and so on are extremely well balanced, and can be challenging without being frustrating. The localization gets the job done, though I could’ve sworn I saw a bit of kanji slip through at one point, and the voice acting is good. The graphics are some of the most lush that I’ve ever seen on the Wii. The simplicity and charm that defines the series is in ample supply. In short, if I had to recommend a Rune Factory to someone, it would be Frontier.

I’ve also been playing a little more Pokemon Platinum, which, if you recall, I started on the way to PAX East. There’s not much to say here other than it’s a Pokemon game, though I am very much enjoying the aesthetic upgrades from Ruby, which I played last year (and speaking of Ruby, I’m still debating whether or not to import my Pokemon from that game). It’s very samey, though, but I kind of expected that. The current plan is to mostly play the game whenever I need to kill time, such as while doing laundry. As such, I expect to wrap up with the main quest several months from now.

After beating Rune Factory Frontier, I took a break for a little while, then started Breath of Fire: Dragon Quarter. Rather, I tried to start it. The difficulty caught me off-guard, as well as the system where some of your experience and whatnot can be carried over to a new game, and after a couple of tries, I quit. This after an aborted attempt to start the game some months ago. Well, the good news is that the fourth time was the charm, and I am now over ten hours in. The battle system is different, but very awesome, with its SRPG-esque character movement tactics making for some really interesting fights. Dragon Quarter has other quirks, too, though they don’t fit so much in the “awesome” column as the “it is what it is” one—from the character design to the fact that the game ends when a certain slowly and constantly upticking meter gets to 100.00%. Very strange game, but I’m having fun.

Finally: the backlog update! Since my January 3rd post, I have beaten five of the pictured games, started (but have not yet finished) two of them, bought and beat two, borrowed one (which I’m still playing), added one to the backlog (Etrian Odyssey II: Heroes of Lagaard), and currently have one on preorder (StarCraft II: Wings of Liberty Collector’s Edition).

Counting Metroid Prime: Trilogy as “one”, January’s photo showed 22 games, and now, on the shelf above me, there are 16 of them (not counting the preorder). I’m making progress!