Are You Ready For Some Space Marines?!

I was beginning to get burned out on RPGs, so yesterday, I installed and started Halo, one of the games on this year’s “must play” list. I say “installed” because it’s the PC port, which I’ve had for a long time, but never once touched. Having played FPSes since Wolfenstein 3D and Doom, I’m most accustomed with traditional computer controls; replacing WASD and a mouse with analog sticks is anathema to me.

That aside, Halo is clearly a previous-gen console game with traditional PC FPS window dressing, going by its aesthetics and limitations. This isn’t necessarily a bad thing, though. The graphics, as straightforward and colorful (albeit with a selective palette) as they are compared to other FPSes from back then, bring to mind much of Blizzard’s work, and certain limitations—namely, that the player can only carry two weapons at a time—lend an additional layer of challenge. Overall, an enormous amount of craft and care is on display, and although Halo remains the most overhyped game of the ’00s, it’s also hard to hate. 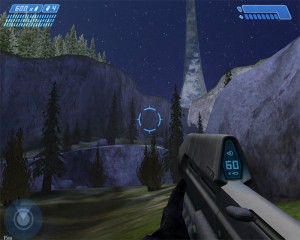 As every gamer knows by now, the player character is the nondescriptly-named Master Chief, a human marine fighting against the alien Covenant on a far-off world. His physical build is strong but not very distinctive, and he is completely covered by armor, right down to the reflective gold mask that hides his face. I’d always gotten the impression that his name and outward appearance were designed as such so that anyone could slide into his shoes, and had thus assumed that he was mute. However, he does have your typical tough-guy voice to match his special armor. Despite this, to his credit, he retains much of his blank-slate persona, and is as inoffensive and plain an avatar as I ever saw one.

The alien enemies are inoffensive as well—I’m a few hours in, and it looks as though I’ll never have to turn my guns against other humans. The grunt-level Covenant come across as cartoonish, what with their dwarven builds and high-pitched voices which wouldn’t be out of place in Worms, but the tougher ones have a certain lightness about them as well. No one would ever mistake Halo for hard sci-fi. Rather, it’s pop sci-fi, with a simple story centered around survival.

Halo‘s environments share much of this pop sensibility, but the best ones (that I’ve seen so far) are atmospheric, and add layers of character. Similarly distinctive is how the missions are presented in the campaign mode. Each mission blends right into the next one, with only a temporary, subtle display of said mission’s title letting the player know where they are in the grand scheme of things (ETA, 04/19: Now that I think about it, though, I do see very brief snippets of load screens between chapters. Either Halo‘s just that old or my computer’s just that badass). The HUD and NPC AI seem to be as good as it got for 2001, and still hold up well today. And the music, oh man the music. I had already been familiar with one or two tracks from Halo, but overall, the soundtrack is outstanding, and the sound editing even better, with much the same natural approach as the mission presentation. Oh, and no supply crates! All of the ammo, weapons, and whatnot I’ve picked up just lie there on the field, mostly near the dead.

So how does it feel playing Halo? As Master Chief, I feel very much like a leader of men, a soldier others look up to. However, there’s also an undercurrent of loneliness and a little bit of paranoia. So far, I’ve been on my own—both through chance and design—for decent stretches, where I am almost always outnumbered. When this happens, both large, open spaces and narrow hallways are approached with caution, with little to no music and a smattering of sound effects (as required) highlighting the action. NPCs—both enemies and fellow marines—don’t respawn, so backtracking adds to this emptiness. Also adding to it are the parts when I am with other marines; their simple camaraderie, via actions and dialogue, is missed when they aren’t around. It has been a long time since I played a proper FPS campaign, but I don’t recall one making me feel this way before (Portal, not being a “proper FPS”, doesn’t count).

The only major problem I’ve had with Halo so far has involved an apparent bug. A certain enemy disappears after I run away past a set point, and this disappearance seems to impede the flow of the story. I don’t think I’ll be able to take this guy down without a sniper rifle, which I had gotten rid of roughly a third of the way to that point, but after doing some lengthy backtracking, I found I couldn’t get to the place where I had ditched it. As such, I’m going to load up a save file from before I lost the sniper rifle, and make damn sure I hold onto it this time.

In general, I’m having a good time with Halo. The look is appealing in the way that any polished product made for a mass audience is. The fights are challenging enough (for the record, I’m playing on Normal), the maps are interesting but not overly complicated, and the Warthog vehicle, when it is available, handles well. It’s still weird to think of how this game helped change how traditionally PC genres were handled on consoles, since if Halo was PC-only, it might’ve earned the legacy of being merely “great” as opposed to “classic”. However, it’s still “great”, and because of that, I’m looking forward to finishing the campaign.