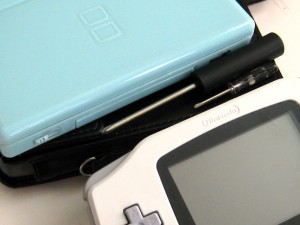 Still, after securing the tools and cleaning my desk, I took out my DS and began opening it up. The screws gave me the most trouble. There were a mix of triwing and Phillips heads, but that wasn’t an issue. What was, though, were two tiny Phillips screws in the bottom of the battery compartment. I couldn’t figure out what to do with them, and after looking up a repair guide online, found that they were not a set of screws I needed to deal with. The last couple that I needed to unscrew were instead under the two rubbery nubs on either side of the DS cart slot, nubs which I then carefully pried off. The underside of the DS came off fairly neatly after that, which was when I had to deal with my next problem: the spring-loaded shoulder buttons. Their construction is simple, and it is this very simplicity that caused them to come off with brief, inadvertent touches. Anyway, I didn’t worry about that for the time being and instead removed the last screw that held the motherboard (which had some kanji or kana scribbled on part of it in marker) in place.

When I took apart my GBA, I found that the rubbery plastic nubs for the buttons were moulded in large pads, with several contact points on each one—very much unlike that old Tiger handheld, which had one individual nub per button. This design, along with the pads’ construction in general, results in tough, high-quality parts which never suffer from inversion. I should’ve expected a similar setup when I opened my DS, but I had forgotten about it until then. Still, although the nub for “down” was not inverted, it did show signs of wear, as did its contact counterpart on the motherboard. It’s worth noting here that the “up” nub and contact were also noticeably worn, though not as much so as the “down” ones. I figured that my best option was to rotate the d-pad’s set of nubs so that the new “down” one would not be as worn out, and thus the old one would get assigned to a less worn contact.

With that done, I put the shoulder and volume buttons back into place, closed ‘er up, popped the battery in, put back said battery’s panel, then booted up the DS. The screens—both of them—flickered. Uh oh. I immediately turned the system off and retraced my steps. All the wires and other circuitry looked fine, so I began closing up the case again. However, this time around, putting the shoulder buttons back was an even bigger pain, and the power switch supplied its own share of annoyances. Case closed, battery in place (but with the cover left off for the time being), boot up the system again. Both screens still flickered.

At a loss for what to do, I did some Googling and came across this page. The “best” suggestion was the one that worked for me—turns out that those two “screws” I had fruitlessly noodled with earlier serve as calibration controls! I adjusted them until I got satisfactory results, then replaced the battery cover.

So, how did it go? After re-entering some basic settings (which the DS forgot due to the removal of the battery) I popped Pokemon Platinum back in and gave it a whirl. All the directional buttons worked nicely, as did the others besides. I played for a little while, then put in a longer play session in the evening. Again, no problems. Mission successful! I am now, once again, the proud owner of a working DS Lite.