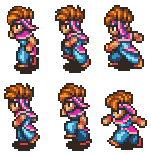 I beat Secret of Mana last night after a long, protracted round of final battles—my second attempt at them, actually. The whole endgame, very much including the boss before the final ones, was riddled with bugs that would make text boxes render incorrectly and, most annoyingly of all, the Mana Sword to randomly disappear from the main character’s hands during a certain battle. These sequences alone made it the buggiest Super Nintendo game I have ever played, and one of the buggiest games I’ve played and beaten, period.

Bugs aside, Secret of Mana is full of quirks—some charming, others annoying. One of the first things I noticed, after watching the simple yet lovely opening and starting a new game, was the animation. The main hero walks with an exaggerated bounce that even carries over to his hair, and the shopkeeper in the first town—like many that I would see later on—danced in a spastic rhythm. These wouldn’t be the last odd animations I would see, as the walk cycles for the playable girl and sprite characters were even more silly than the hero’s. However, the battle animations, as well as those for the monsters, are very straightforward, and later on, the dragon Flammie would fly and undulate in mid-air with an almost hypnotic fluidity.

I eventually got used to the heroes’ bouncy, flailing gaits, but one thing I was unable to really get the hang of up until the very end was the menu system. Pressing Y on a SNES (or Wii Classic) controller brings up the “ring commands”, a set of menus. The sprite and girl use four ring menus (items, magic, mana weapons, and everything else), while the hero uses everything save for magic; each menu can be searched through by pressing up or down on the directional pad, with left and right reserved for going through the menus themselves. Oh, and each character has their own individual set of commands; those for characters not directly controlled by a player are accessed via the X button. I understand why it was set up this way—Secret of Mana can be played cooperatively with one or two others—but I was never able to navigate through menus with the efficiency and ease that I have been with other action RPGs.

Battle has its own quirks as well. All enemies are visible and encounterable directly on the field, which I liked, and in general battle plays out like a more action-driven version of Chrono Trigger, but with individual power attacks subbing for combo moves. Although the sword is clearly intended to be the hero’s weapon, I had the whip equipped on him for a good portion of the game as it was excellent for ranged attacks and easier to hit flying enemies with. There’s also areas of certain dungeons that require either a sword, axe, or whip to be equipped in order to progress, and the latter weapon was the one that had to be employed the most frequently when it came to such situations. As I was playing alone, I had to constantly manage the computer-controlled characters both through the Action Grid and on the field, often backtracking when I would press forward only to find that at least one of them was stuck on a narrow ledge or some similar piece of scenery.

The game’s story, lovingly told with the help of distinctive graphics and a soundtrack to match, takes place in a world where the life force “Mana” is weakening. Many years ago, there was an advanced civilization which consumed a great deal of Mana. They reached their peak with the Mana Fortress, which was stopped by an ancient hero in order to restore nature’s balance. Now, an empire seeks to revive the ancient fortress while a boy in the village of Potos happens to come across the legendary Mana Sword, and thus the tale begins. Along with the plot itself, it’s got many other JRPG tropes, all served in an unusually compact package. There are Mana Seeds to seek out, Mana Weapons to level up, and elemental magics to gather. There’s also the odd plot hole or two, and several scenes that could have benefitted from more fleshing out. The dialogue could’ve also been better; apparently, the localization was a rush job by fan-favorite translator Ted Woolsey.

All in all, it’s an interesting, if average, action RPG with a smattering of unique ideas, some of which stick better than others. One recommendation I must make for anyone who is planning to download Secret of Mana via Virtual Console (which is how I got it), especially if one has never played it before, is to get the original manual via replacementdocs. Healing and support items like the barrel are not explained in game, nor are they in the VC download’s own documentation, but they are in this manual, which features tons of information in general. I only wish that I’d thought to seek out a printed world map as well. The overworld and mapping features within Secret of Mana are extravagant considering the game’s age, but flawed, a description which nicely sums up the game itself.