Sick and tired of being the victim of frequent kidnappings, Princess Plumcot of the Palmtree Province decides that the best offense is a powerful defense!

As a Captain under her command in the Palmtree Defense Squad, work to fend off the Saur Corps and make sure that Plumcot never gets kidnapped again.

Download it now ( Windows only ), and/or read more below!

I can’t find the exact quote now, but General Princess was inspired by Anita Sarkeesian mentioning how she’d like to see a game where a princess rescues herself. This isn’t that exact idea made manifest; rather, here, the princess attempts to prevent the need to be rescued in the first place.

Work on this game started in late 2016 and had originally been planned to be that year’s Holiday Card, but due to health problems, I postponed the whole project until 2017. When I picked up work again, the biggest change I made was the addition of Princess Sayre.

As with the previous Holiday Cards, I decided to make this game featuring a whole new genre (tower defense) and game engine (GameMaker), rather than retread what I had done before. Learning the ins and outs of GameMaker proved to be frustrating at times, and yet it wound up impressing me with its versatility and ease of use. There are some wonky aspects to this game, but I think I did the best I could with my limited time and resources.

Princess/General Plumcot: The beloved ruler of the Palmtree Province, who forms the Palmtree Defense Squad as a way to better protect herself and her people.

The Palms: The Palmtree Province’s peace-loving residents-turned-defenders. They take on a variety of roles during the course of the game.

King Saur: The villainous leader of the Saur Corps. His favorite hobby is kidnapping Princess Plumcot.

George and Phillip: British-American brothers who, in the past, were regularly counted on to rescue Plumcot from the clutches of King Saur.

Princess Sayre: Princess of a neighboring land and tactical advisor to the Palmtree Defense Squad. 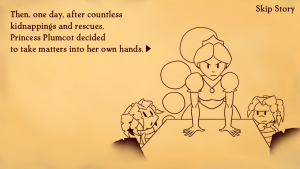 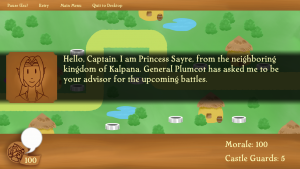 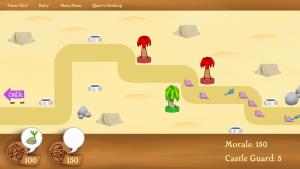 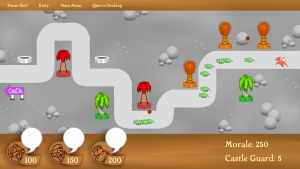 Windows: XP or later, with DirectX 9 or later
Recommended screen resolution: 1366×768 or higher

The entire game is designed to be played with just a mouse, though as an option, the ESC key can be used to pause during battle scenes.

The font AkaDora is ©2005 James D. Milligan/akaType. The font Mops, by Uwe Brodhert, is licensed under an Open Font License (OFL).