After a thousand years, a great evil has arisen once again, and only the Legendary Heroes can stop it! In order to find the four Doodads needed to confront this evil, the Heroes must find the secret lairs hidden behind the world’s waterfalls.

However, what if there were no more waterfalls left in the world, save for one?

Join Cascadia, the last remaining waterfall, in a journey to fulfill the requirements of legend and hide the Doodads from the Legendary Heroes, in this really short and pretty silly RPG!

The genesis of this game is a sole tweet by one Peter Molydeux:

Game in which you control a waterfall and must travel the world hiding outdoor passages from adventurers.

This being one of my favorite tweets of his, I kept the idea stored away in my brain. I wasn’t able to make anything based on it for either of the two MolyJams, but a solid idea started forming in my head in the second half of 2014, and I got to work that same November.

I also incorporated elements and text from The Grand List of Console Role-Playing Game Clichés, which, as evidence of longevity, sports a screenshot bearing a watermark from the original GIA. Yes, it’s that old. It’s also awesome, and I even had some of my small contributions included back in the day (I’m “Reeve, Shinra Inc.” in the credits).

Anyway, armed with these two sources of inspiration, a copy of RPG Maker VX Ace, some of my favorite graphics software, and a JRPG-soaked brain, over the course of the next month and a half, I slapped together this little game. Instead of doing one of my annual (usually) fanart “Holiday Cards”, I made this game my seasonal gift to my online friends. If you are one of those people here right now, Happy Holidays!

Cascadia: The titular waterfall, who travels the world at the behest of a fairy named Cicerone the Expounder, in order to sit in front of waterfalls that contain Doodads, magical whatzamajiggies that are necessary (somehow) for saving the world. Element: Water.

Zephyr: A cool breeze and Cascadia’s first party member, basically tagging along for fun, adventure, and to see what happens next. Element: Wind.

Quercus: Rather prickly for a tree, Quercus is one of the children of the Great Yggdrasil, and is essentially forced to join Cascadia’s party. Element: Earth.

Bun-Bun: The adorable token female party member and pyromaniac, and the last one to join the team. Element: Fire. 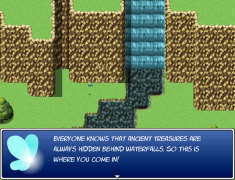 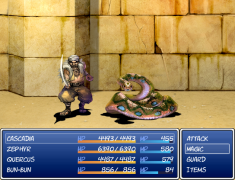 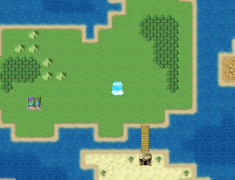 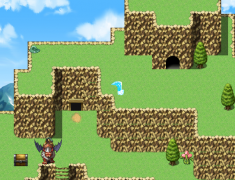 These are the base requirements for RPG Maker VX Ace itself, which should be fine for the game.

RPG Maker VX Ace itself is not required to play this game.

Finally, although this game was made on a Mac, sorry, but there is no Mac OS X version.

On a standard keyboard:
– Use the arrow keys to move up, down, left, and right.
– Enter (numpad): confirm choices and get on/off the airship (when available).
– Zero (0) (numpad): cancel choices and open the menu.

With an Xbox controller (wired 360 tested):
– Use the left analog stick to up, down, left, and right.
– X: confirm choices and get on/off the airship (when available).
– B: cancel choices and open the menu.

I also tested the game with a PlayStation controller (DualShock 2 with USB adapter), but could not get it to work. If you have better luck with any DualShock, or any other type of controller for that matter, please let me know and I’ll add the info here.